A 30 year-old woman comes to her primary care physician because of muscle cramps, nausea, and fatigue. The patient endorses a history of depression and seizure disorder, both of which are currently managed with medications. Family history is notable for Addison disease in her maternal uncle. Temperature is 36.9°C (98.4°F), pulse is 75/min, respirations are 14/min and blood pressure is 115/80 mmHg. Cardiac, pulmonary, and abdominal examinations are noncontributory. Additional laboratory results are as follows:

Which of the following is the most likely explanation of the patient’s symptoms?
Memory Anchors and Partner Content 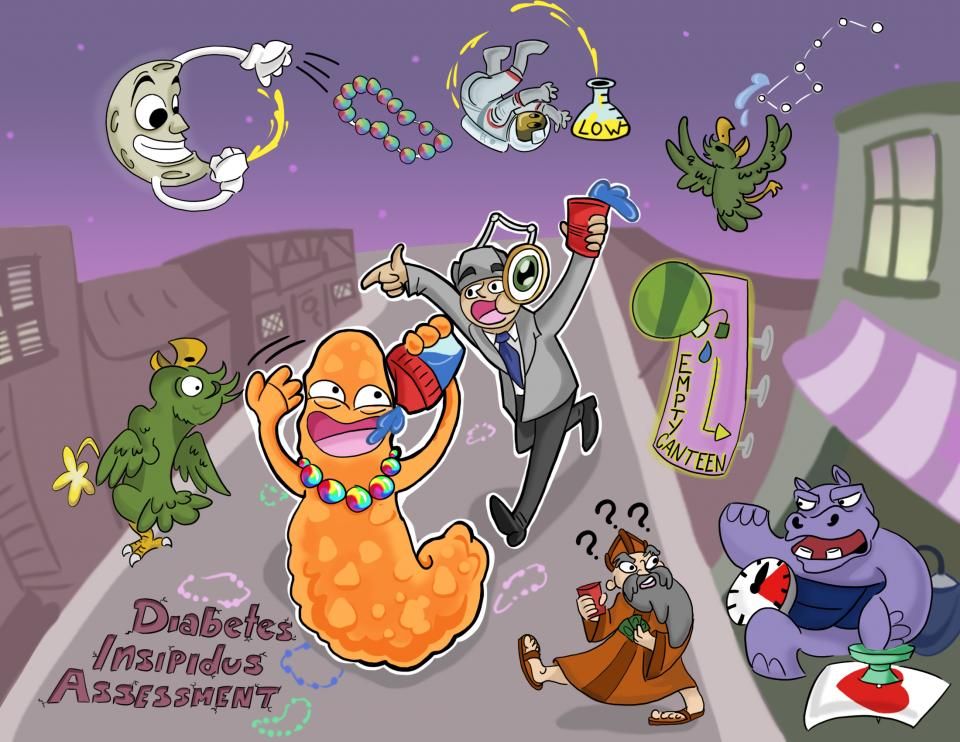 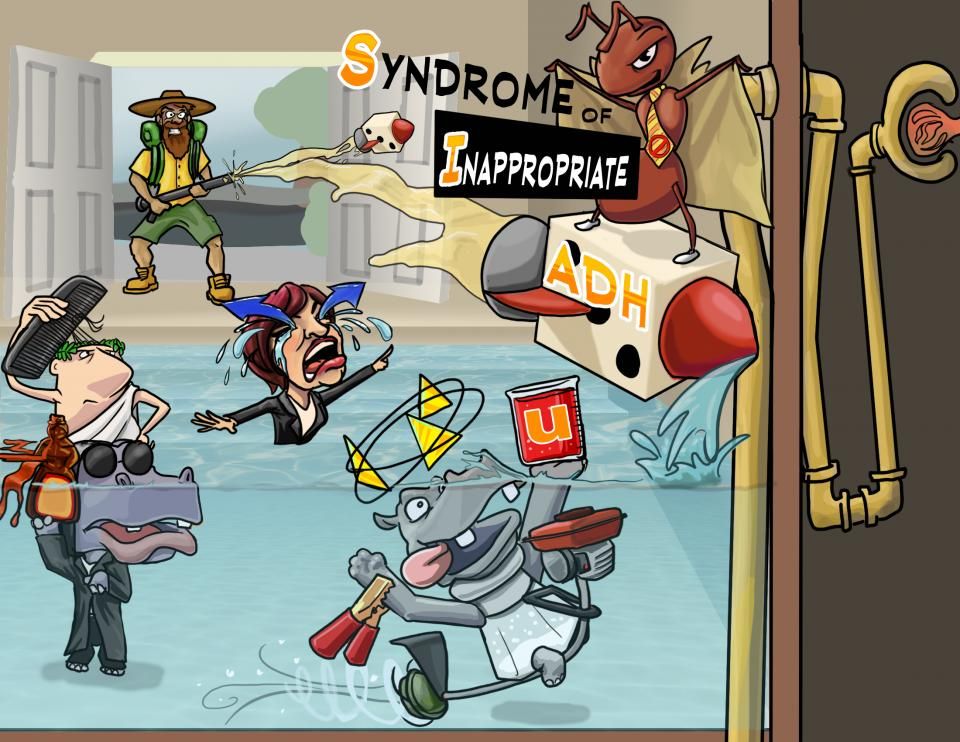 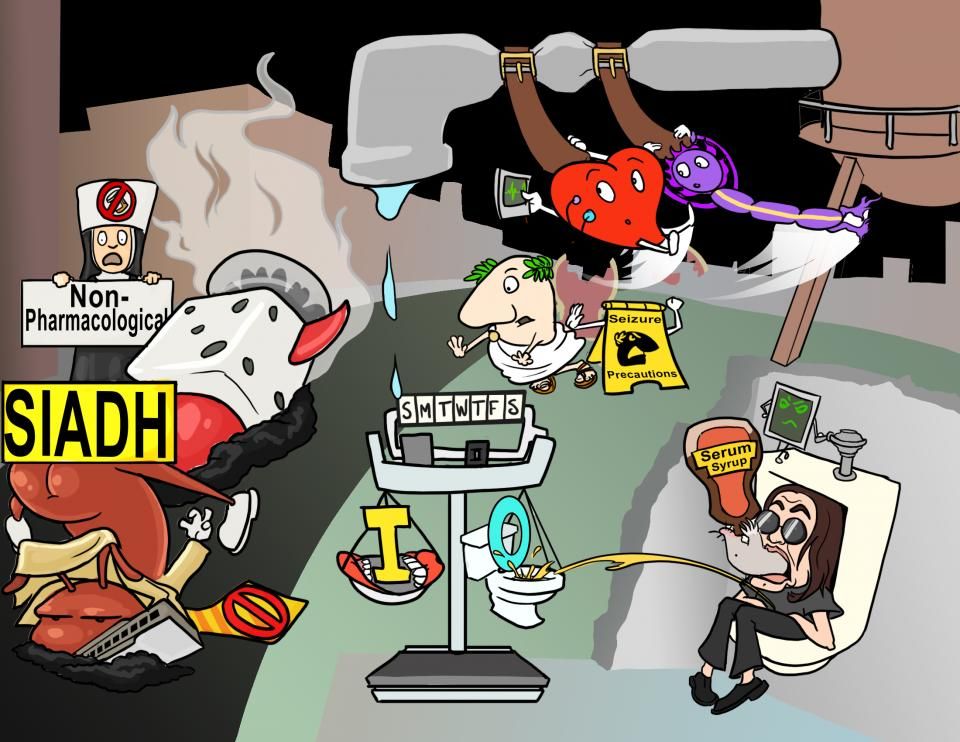 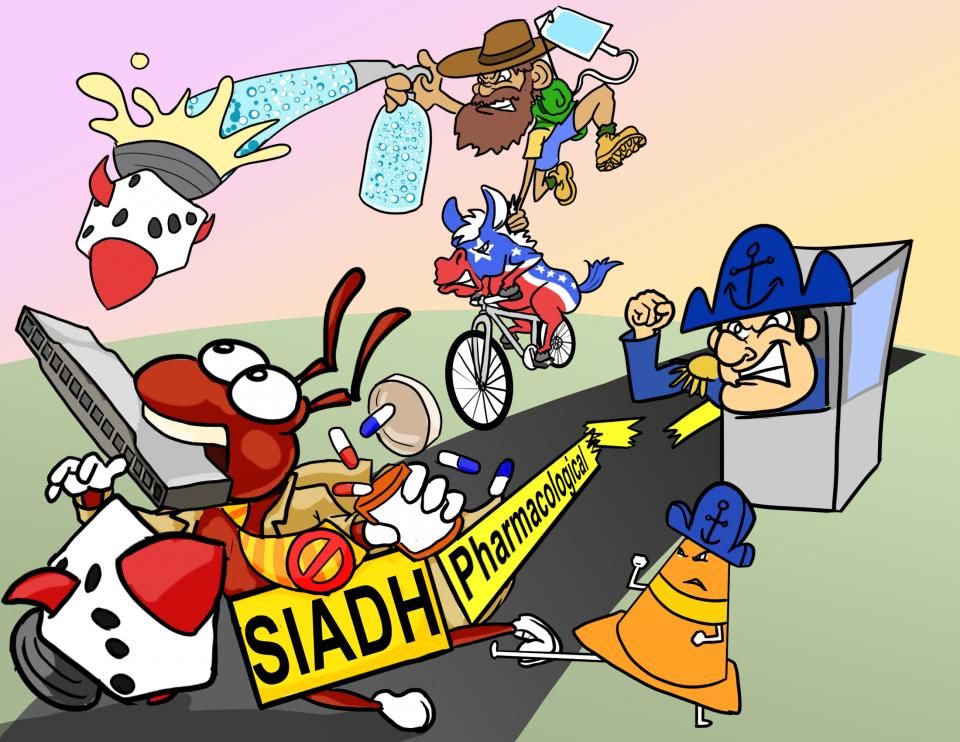 Okay, so two people were admitted to the Endocrinology ward. One of them is 35 year old Imre, who came in with intense polyuria and polydipsia. Imre was dehydrated and presented with dry mouth, headache, dry skin and dizziness. Several tests were done and results showed increased serum osmolality and further on, a desmopressin test was done. During the test, an ADH analogue was administered and urine osmolality increased. The other person is 45 year old Sienna who came in to do some routine tests because she started taking cyclophosphamide and wanted to make sure that there are no complications. Her lab results showed hyponatremia, decreased blood osmolality, and her urine osmolality was higher than serum osmolality.

Now, both individuals are unable to maintain normal osmolality. But to understand this we need to go over a bit of physiology first. In the brain, specifically in the hypothalamus, there are osmoreceptors which can sense the osmolality of the blood, or how concentrated it is. Osmolality is the concentration of dissolved particles in the blood plasma, or the liquid portion of blood. There are a number of dissolved particles in the blood plasma, but the major ones are glucose, sodium, and blood urea nitrogen, and a normal osmolality is between 285 and 295 milliOsmoles per kilogram.

Now, during periods of dehydration there is an increase in concentration of these particles in the blood and osmolality increases. The osmoreceptors in the hypothalamus sense the change in osmolality and this triggers the sensation of thirst. The water that we drink gets absorbed and dilutes the blood, bringing the osmolality back to normal.

In addition to osmoreceptors, the hypothalamus also contains the supraoptic and paraventricular nuclei that produce antidiuretic hormone, or ADH, which is then sent to the posterior pituitary for storage. ADH is also called vasopressin because it causes smooth muscle around the blood vessels to contract, which increases resistance and raises blood pressure.

When the osmoreceptors detect high osmolality, they signal the supraoptic nucleus to send ADH into the blood which travels to the kidneys, specifically to the principal cells in the distal convoluted tubule, and collecting ducts, of the nephrons. Here ADH binds to a receptor called vasopressin receptor 2, or VR2. This causes aquaporin proteins inside the principal cells to embed into the cell membrane and open a channel that only lets water from the lumen of the nephron back into the blood. Just like drinking more water, this dilutes the blood, and returns plasma osmolality to a normal level. However, this reabsorption process also decides how much water leaves the body as urine, and how concentrated the urine is, which is one of the things that keeps a normal urine osmolality between 300 and 900 milliOsmoles per kilogram.

Now that we know all this, diabetes insipidus is when the kidneys reabsorb too little water, so the water remains in the nephrons and is lost via urine. This leads to a lot of dilute urine, or polyuria. Since there’s less water in the blood, plasma osmolality increases and that triggers thirst and polydipsia. Now, if the problem is caused by a lack of ADH, it’s called central diabetes insipidus. If it’s due to a decreased response to ADH by the kidneys, it’s called nephrogenic diabetes.

Let’s start with central diabetes insipidus, which can be caused by conditions that affect the hypothalamus, in which case it won’t be able to produce ADH, or conditions that affect the pituitary gland, in which case there’s no place to store the ADH, and in some cases, both the hypothalamus and the pituitary gland are affected. As a result, there’s insufficient ADH in the blood, and that means there is less vasoconstriction, and insufficient aquaporins in the distal convoluted tubule and collecting duct. Some causes of central diabetes insipidus include pituitary tumors, head trauma, head surgery, ischemic encephalopathy, autoimmune conditions or sometimes, the cause can be idiopathic.

Now, the symptoms of both central and nephrogenic diabetes insipidus are polyuria and polydipsia and you have to remember this for your tests. A person with diabetes insipidus typically produces over 3 liters of dilute urine each day, so it can quickly lead to dehydration and hypotension. The increase in plasma osmolality can result in fatigue, nausea, poor concentration, or confusion.

In addition, a water deprivation test can be done to distinguish diabetes insipidus from psychogenic polydipsia, which is when an individual drinks more water than they need, because of a variety of psychological or psychiatric causes. That’s where an individual doesn’t drink water for 2 to 3 hours, then hourly measurements of urine volume and osmolality are done. In a person with diabetes insipidus, urine osmolality will normally stay below 300 mOsm/kg despite having no fluid intake. With psychogenic polydipsia, urine osmolality increases during the test.