A 24-year old man is brought to the emergency department by the police after being found wandering the streets screaming at bystanders. He resisted arrest and became physically aggressive. While a nurse attempts to place an IV, the patient screams and attempts to hit her. His temperature is 37.1°C (98.6°F), respirations are 20/minute, heart rate is 120/minute, and blood pressure is 155/95 mmHg. The patient is subsequently provided with intramuscular haloperidol. Urine toxicology confirms the use of a drug that exerts its effects by binding to and activating N-methyl-D-aspartate (NMDA) receptors. Which of the following physical exam findings is highly associated with this drug? 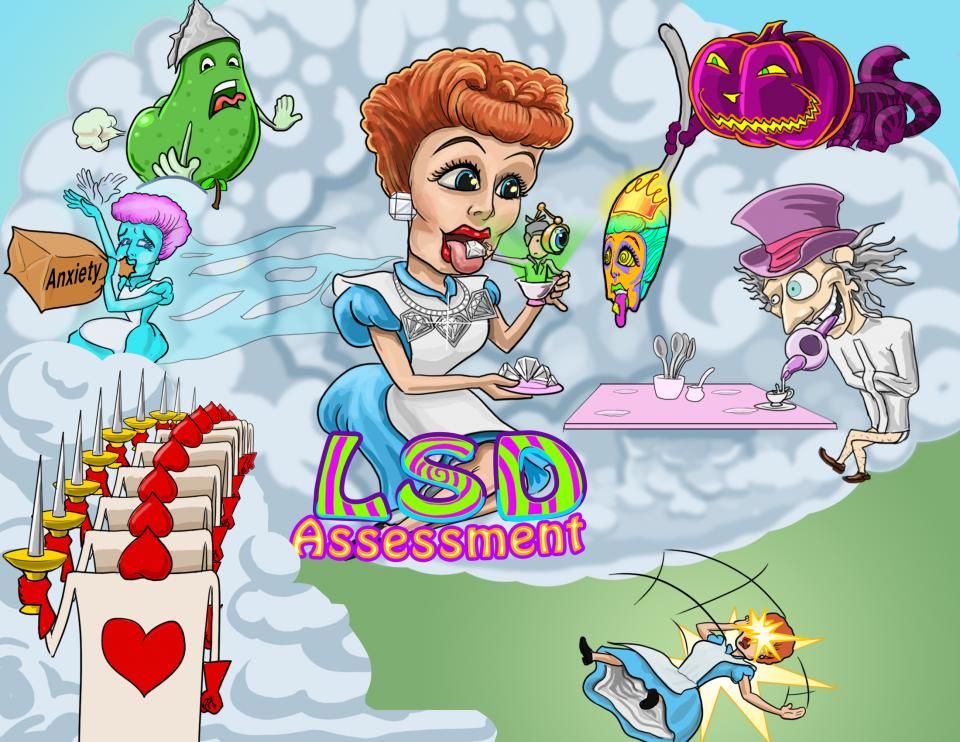 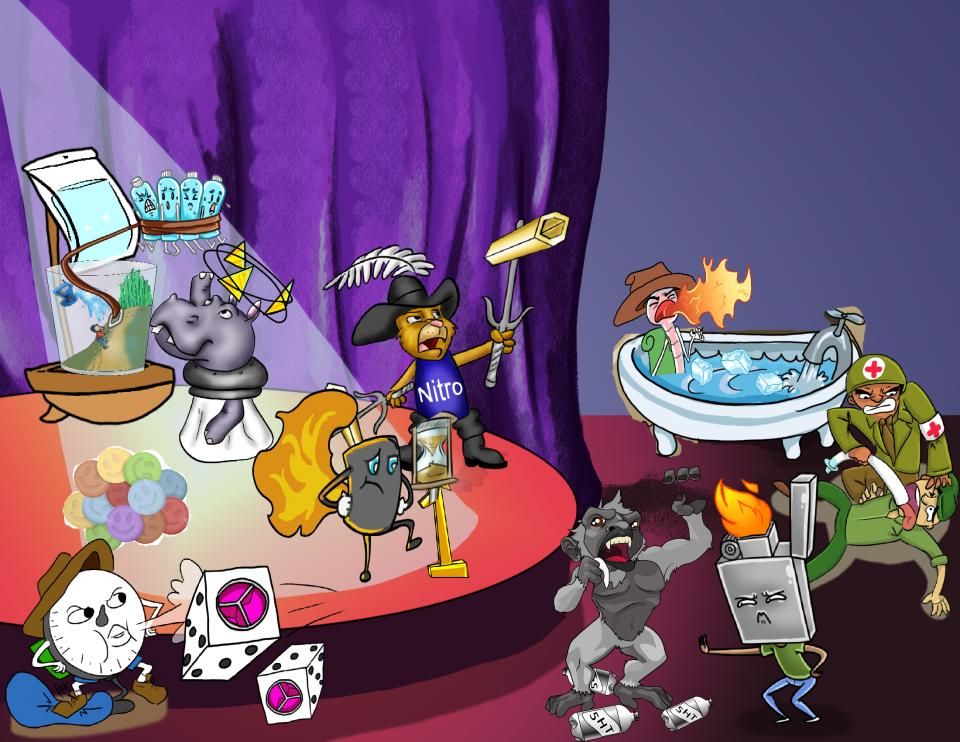 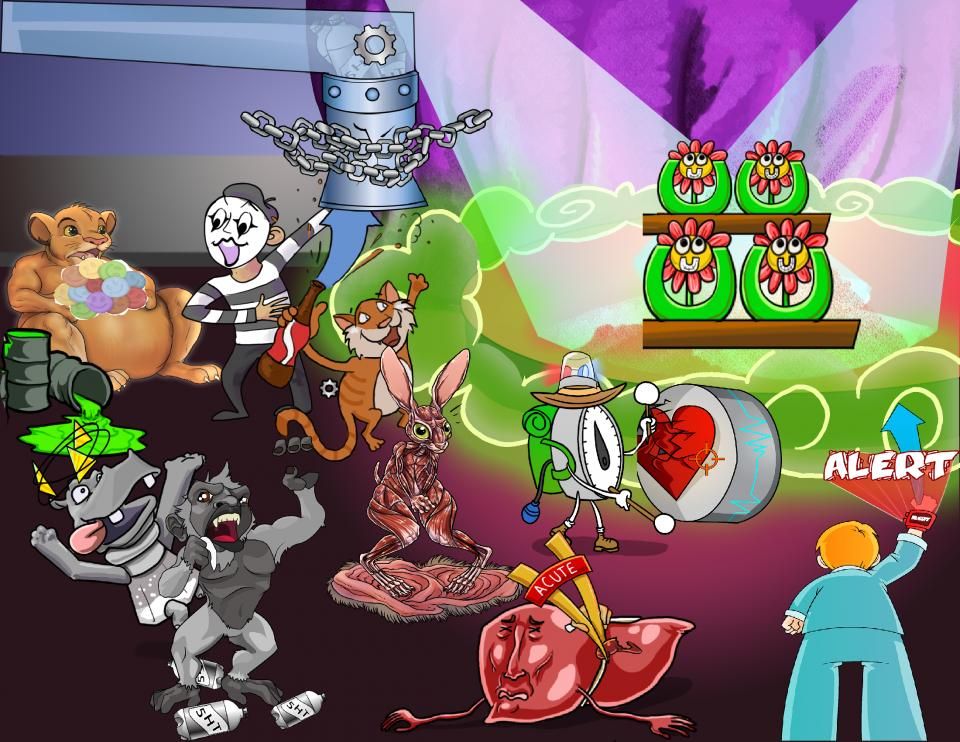 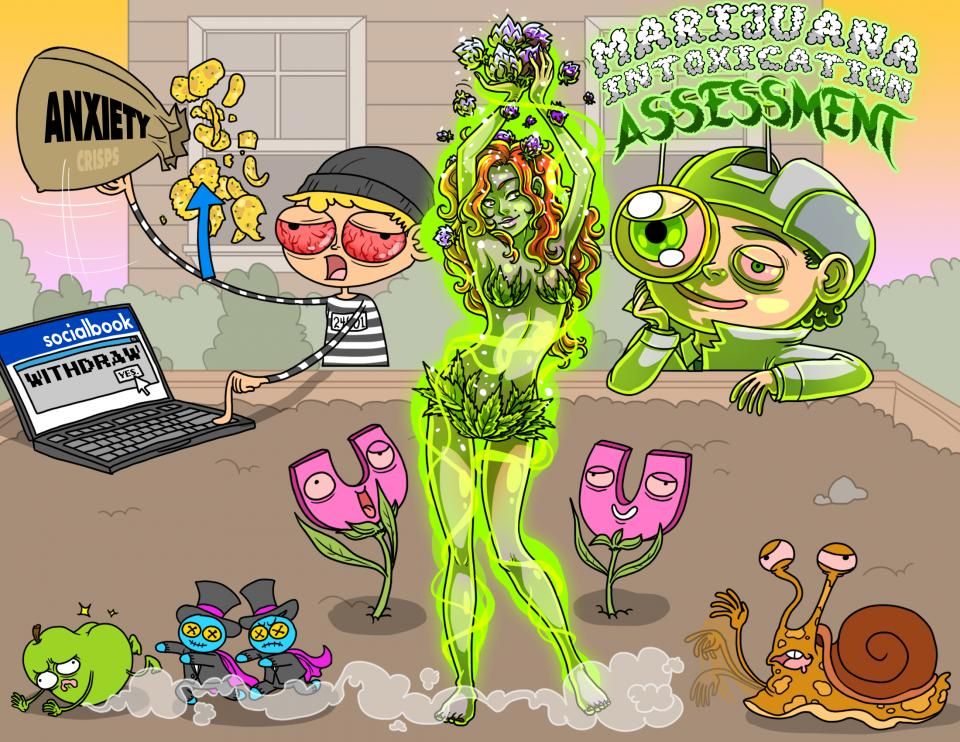 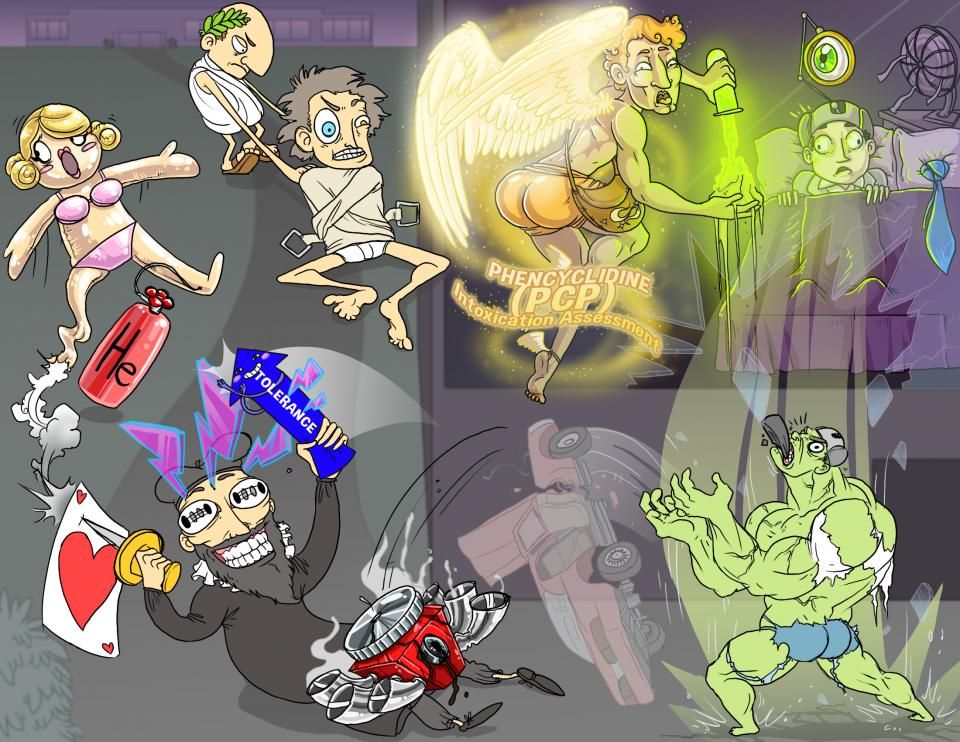 In the middle of the night, two people are brought to the clinic. First comes 18 year old Kyle and his mother, who's noticed that lately, Kyle seems to have an increased appetite, and won’t stop laughing or giggling. Kyle adds that he feels like time has stopped and that’s making him a bit anxious. Upon physical examination, Kyle’s eyes are extremely red, he has a heart rate of 105 beats per minute, and a blood pressure of 130 over 90 millimeters of mercury. Next comes 25 year old Matt and his girlfriend Allison, who is very concerned for him. She says that in the past few months, Matt has been very aggressive and violent, and has been frequently getting into fights with strangers for no good reason. Matt interrupts Allyson and tells you that the reason he gets into fights is because some voices in his head tell him so. Upon physical examination, you notice that Matt keeps tapping his feet, and his eyes keep moving from side to side and up and down. In addition, he has a heart rate of 110 beats per minute, and a blood pressure or 135 over 95 millimeters of mercury.

Okay, let’s begin with lysergic acid diethylamide, better known as LSD. This drug is available as pills, capsules, and liquid, and is illegal in most countries. Now, LSD intoxication has a wide variety of effects, including hallucinations that are mainly visual and auditory, so individuals may see or hear things that aren’t real, like vivid colors, distorted objects, or imaginary noises. At the same time, individuals may experience euphoria, which is a state of extreme happiness, self-confidence, and expansiveness. But it’s not all literal rainbows and happiness. Another classic sign of LSD intoxication is depersonalization, which is when an individual feels like they’re an outside observer of their own thoughts, feelings, or body. So for instance, a person may feel like they’re floating and watching over themselves without being able to control their own behavior or movements. And this might be combined with anxiety, panic attacks, as well as paranoia, where the individual is accusatory or generally distrustful and suspicious of other people.

Now, LSD may also have some long-term consequences, meaning that they don’t occur during intoxication, but may persist for months or even years. So, some individuals may develop flashbacks, which are episodes where they can experience some of these effects even after the LSD has worn off. Finally, LSD also seems to be a precipitating factor for the development of psychosis, a severe mental disorder characterized by perceptual distortion associated with hallucinations, delusions, and disorganized thought and speech. The good news is that LSD use typically doesn’t cause dependence, meaning that the body doesn’t adapt to the drug over time, so the person isn’t likely to suffer from withdrawal if the drug is stopped. And that’s a high yield fact!

Next we have cannabis, better known as marijuana. Cannabis is available as smokable herbs, teas, or edibles, as well as pills, creams, and transdermal patches. The use of cannabis as a recreational drug is still illegal in many countries nowadays, while its use for medical purposes has been legalized in lots of countries.

Now, the main psychoactive compound of cannabis is called cannabinoid. Cannabinoid acts on brain areas involved in sensory and time perception, thought, and emotions. As a result, marijuana intoxication is typically associated with hallucinations, slowed perception of time, and impaired judgement, along with euphoria and uncontrollable laughter. Very often, individuals also experience increased appetite, and heightened senses, particularly that of taste. Sometimes though, usually with higher doses, individuals may experience adverse effects like anxiety, paranoia, panic attacks, and social withdrawal, meaning they may isolate and become antisocial.

Cannabis intoxication also has some physical effects. A telltale sign that someone’s consumed cannabis is conjunctival injection or red eyes. That’s because cannabis can cause dilation of the capillaries in the conjunctiva of the eyes. Often, individuals may also experience cottonmouth, or dry mouth, as cannabis causes a decrease in saliva secretion. Cannabis can also impair motor coordination, balance, and reaction time. Finally, some individuals may develop tachycardia and hypertension.

For your exams, you should also know that some countries have approved the use of cannabis or synthetic cannabinoids like dronabinol for medical purposes. They are mainly used as antiemetics to reduce nausea and vomiting for individuals undergoing chemotherapy, or as appetite stimulants, for individuals with cancer or AIDS. Finally, marijuana may also help relieve chronic pain.

Over time, cannabis use may result in dependence. As a result, individuals that stop using it may experience withdrawal symptoms, including mood changes like irritability, depression, or anxiety, as well as insomnia and restlessness, meaning that they’re unable to relax and rest. Finally, withdrawal of cannabis can result in a decreased appetite.

A way more dangerous hallucinogen is MDMA, more commonly called ecstasy or molly. It's available mostly in the form of pills or capsules. MDMA stands for 3,4-methylenedioxymethamphetamine, and it is a sympathomimetic amphetamine, which means it increases the effect of serotonin and catecholamines, in particular norepinephrine and dopamine. For that reason, in addition to its hallucinogenic effects like enhanced senses, and distorted time perception, bear in mind that MDMA also acts as a stimulant, and can cause euphoria and a feeling of having lots of energy. This is often associated with hyperactivity, as well as disinhibition, or disregard for social rules that leads to inappropriate, impulsive, or even aggressive behavior. On top of these, two very suggestive signs of MDMA misuse are appetite suppression and bruxism, or involuntary teeth grinding.