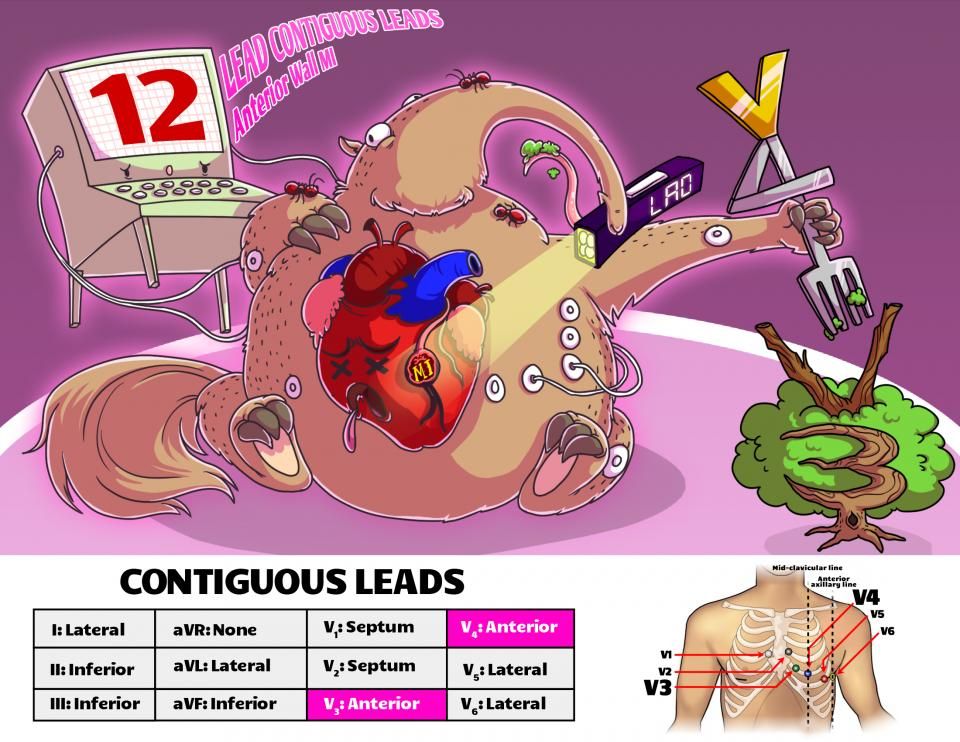 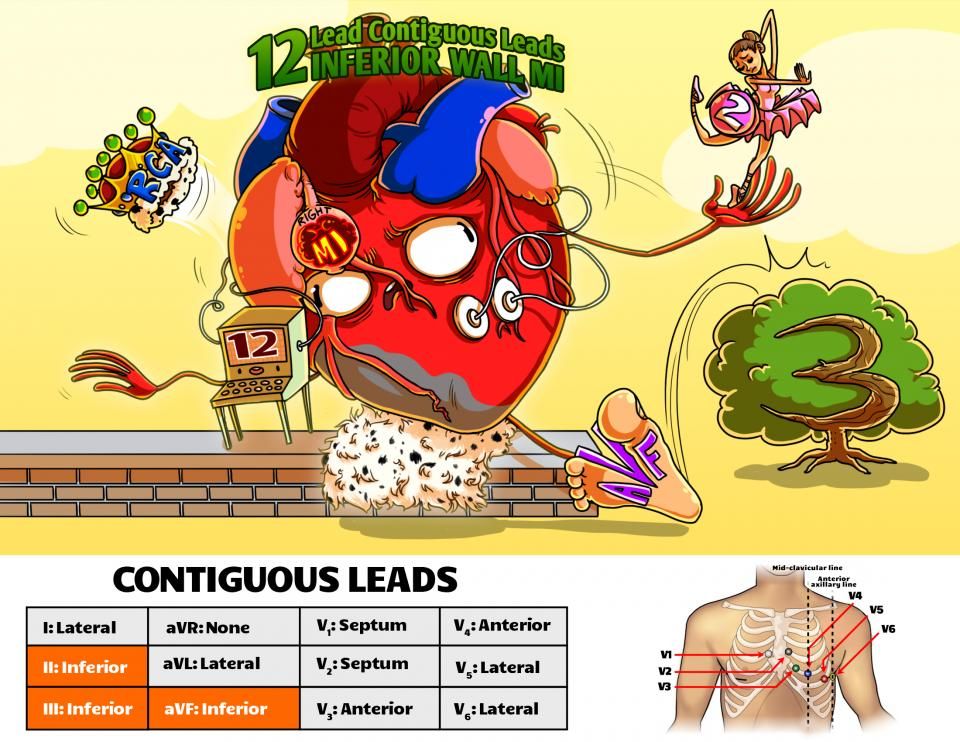 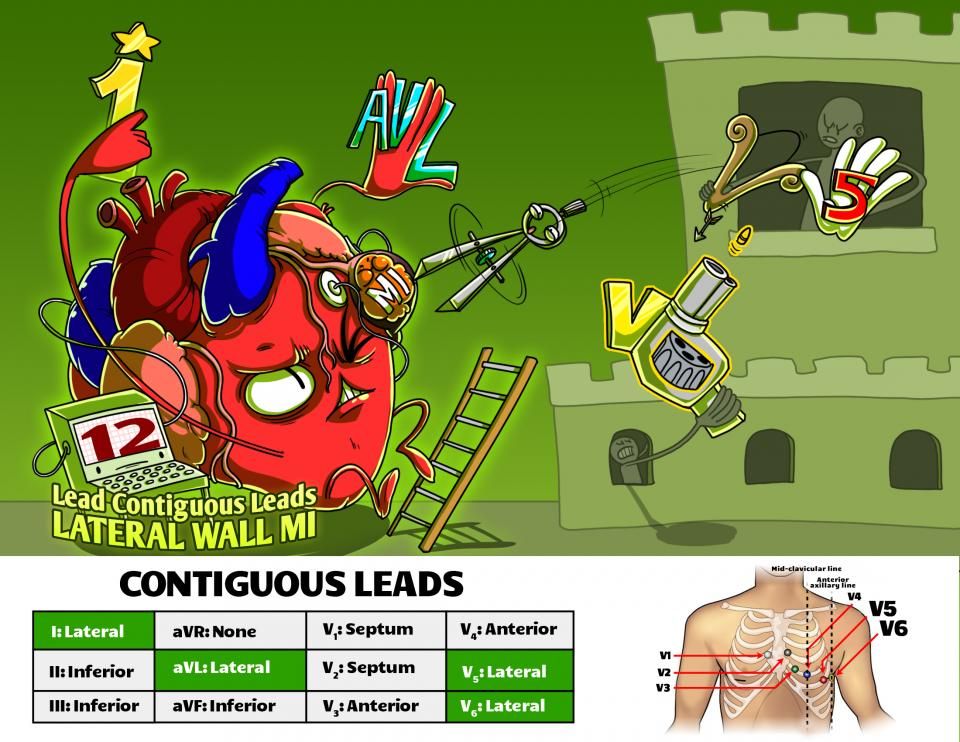 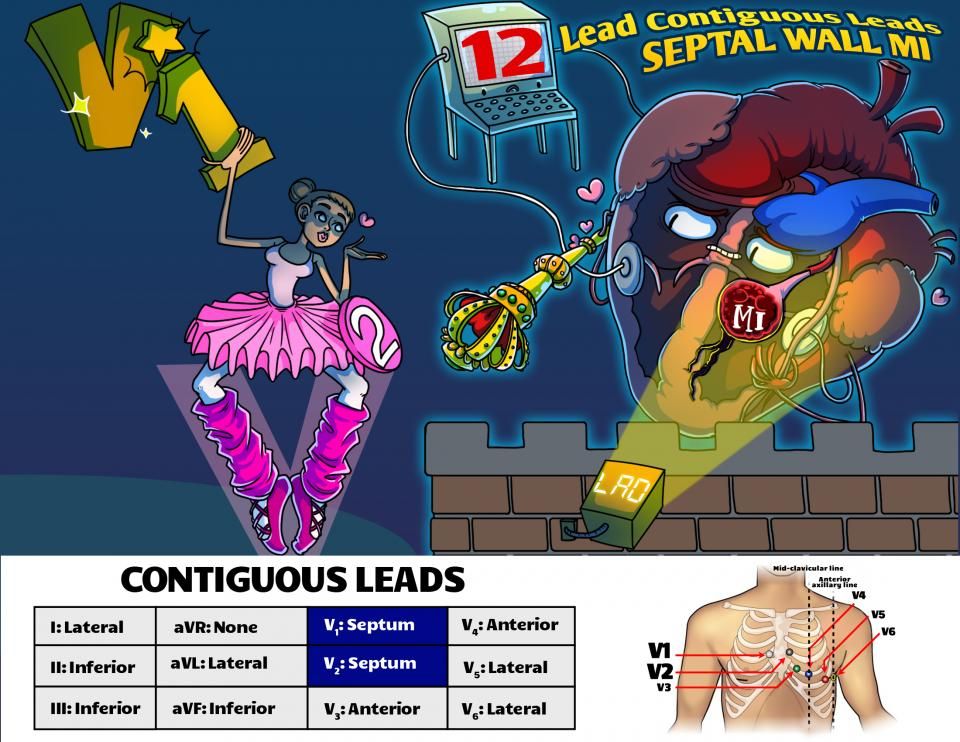 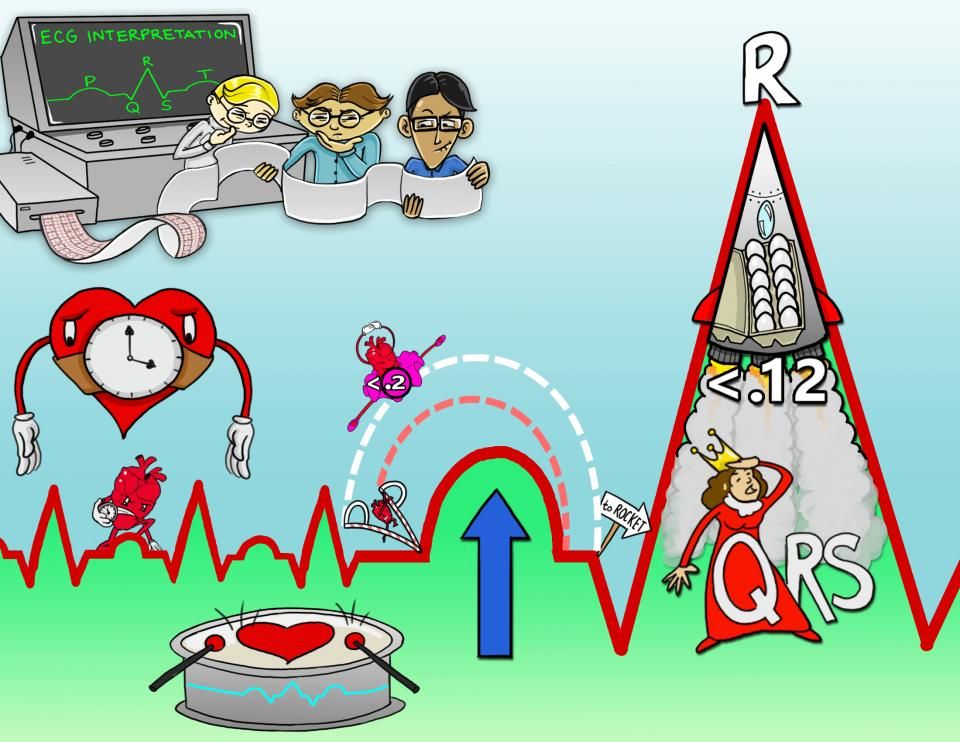 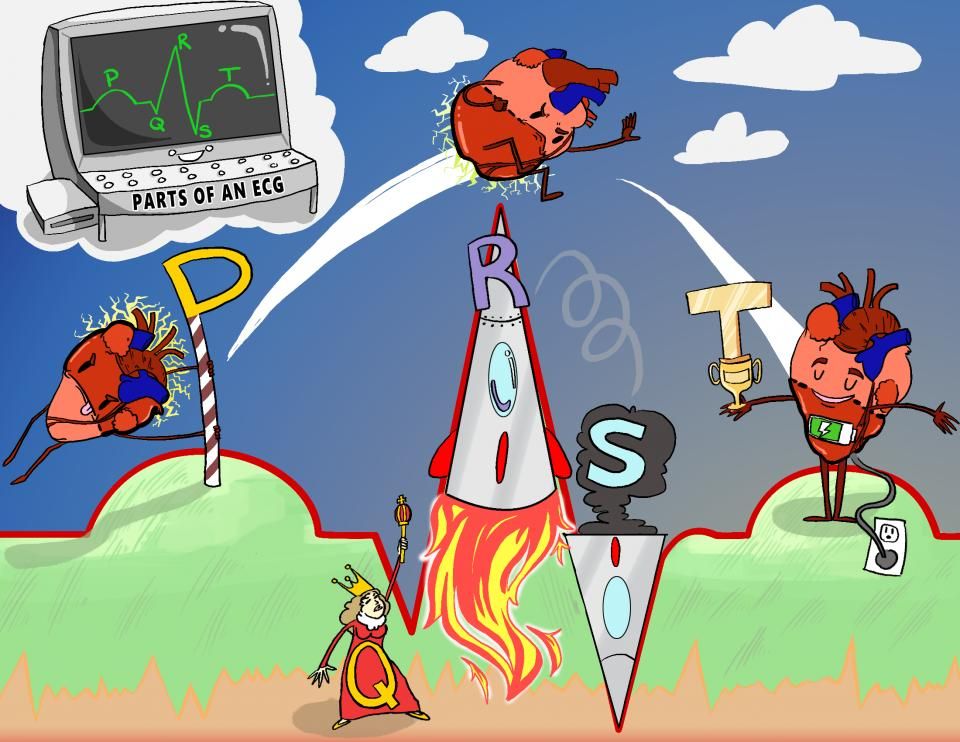 An electrocardiogram is also known as an ECG; the Dutch and German version of the word, elektrokardiogram, is shortened to EKG. It is a tool used to visualize, or “gram,” the electricity, or “electro,” that flows through the heart, or “cardio.” Specifically, a 12-lead ECG tracing shows how the depolarization wave, which is a wave of positive charge, moves during each heartbeat, by providing the perspectives of different sets of electrodes. This particular set of electrodes is called lead II; one electrode is placed on the right arm and the other on the left leg. Essentially, when the wave’s moving toward the left leg electrode, you get a positive deflection. This big, positive deflection corresponds to the wave moving down the septum.

To understand the basics, let’s start with an example of how we can look at the heart with only one pair of electrodes: a positive and a negative one. These electrodes detect the charge on the outside of the cell. Remember, at rest, cells are negatively charged relative to the slightly positive outside environment; let’s make these cells red. When they depolarize, the cells become positively charged, and leave a slightly negative charge in the outside environment; let’s make these cells green. Now, if we freeze this “wave of depolarization” as it’s moving through the cells, half of the cells are negative, or depolarized, and half are positive and resting; therefore, there’s a difference of charge across this set of cells. You can think of the charge difference as being a dipole, because there are two electrical poles. We can draw this dipole out as an arrow, or vector, pointing towards the positive charge. Remember, the electrodes detect charge on the outside of the cell, so this points toward where the positive charge is, outside.

Now, if there’s a dipole vector pointing toward the positive electrode, then the ECG tracing shows it as a positive deflection; the bigger the dipole is, the bigger the deflection is. If we unpause this, then everything becomes depolarized. Since there’s no difference in charge, there’s no dipole, and thus no deflection. Moments later, a wave of repolarization goes through, and the cells become negative once again. Pausing halfway through again, now the vector dipole goes in the opposite direction, and faces the negative electrode; this means that there will be a negative ECG tracing. Again, the bigger the dipole is, the bigger the negative deflection is. Even though it’d be nice if the depolarization wave lined up perfectly with the electrodes, usually that’s not the case. So, we simply look at the vector component that is parallel to that electrode. For example, let’s say that the depolarization happened this way, at an angle; then, we’d simply break the vector into two parts. The one we care about is the one that’s going towards the positive electrode, which causes a deflection, even though it’s a slightly smaller deflection than previously. In other words, the size of the deflection on the ECG tracing always corresponds to the magnitude, or size, of the dipole in the direction of the electrode. The perpendicular component isn’t pointing at the electrodes, so it doesn’t cause any deflection. In fact, if there’s a depolarization wave that goes straight up, perpendicular to the positive and negative electrodes, there would be no deflection!

In a standard ECG, there are 10 electrodes: four limb electrodes, with one each on the left arm, right arm, left leg, and right leg; and six precordial electrodes, V1 through V6, that wrap around the chest. The right leg electrode is usually used as a neutral lead. The heart is a three-dimensional organ, so V1 through V6 line up in the transverse, or horizontal, plane of the heart. Each electrode is set up to detect any wave of positive charge coming towards it. These are collectively called the chest leads.