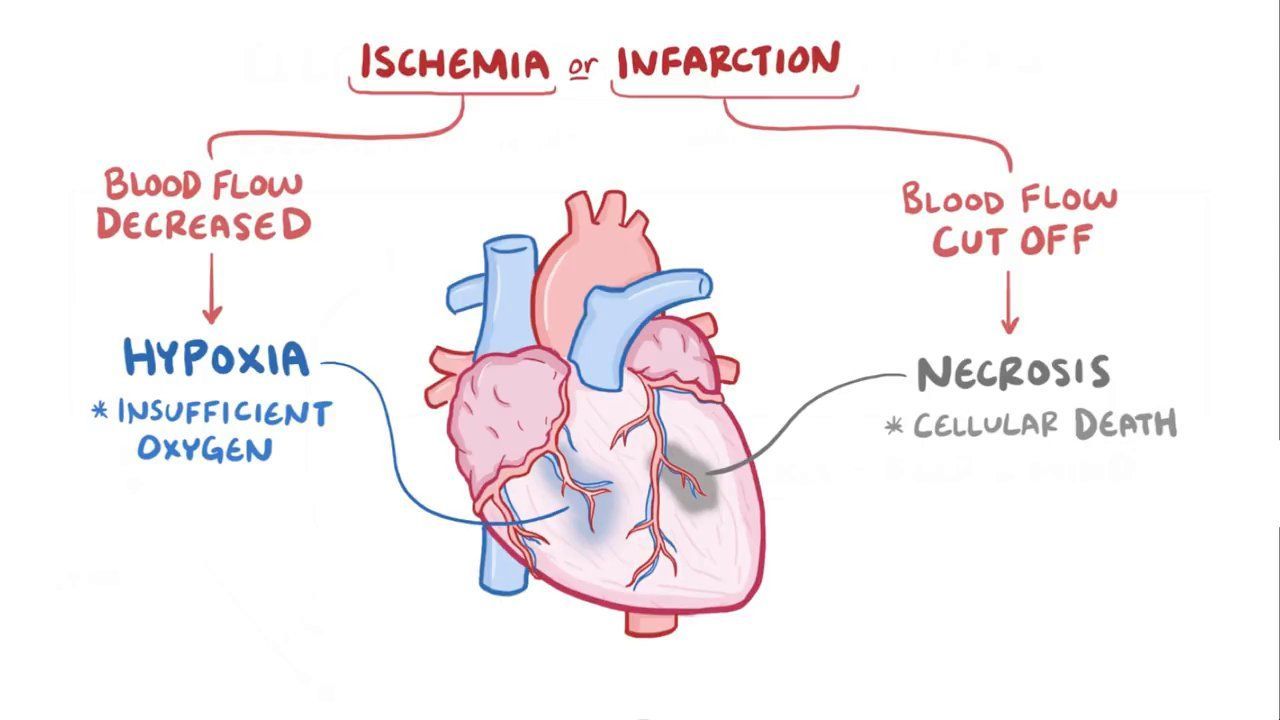 The of the left ventricle is supplied by a terminal branch of the right or left coronary artery.

An electrocardiogram is also known as an ECG; the Dutch and German version of the word, elektrokardiogram, is shortened to EKG. It is a tool used to visualize, or “gram,” the electricity, or “electro,” that flows through the heart, or “cardio.” Specifically, an ECG tracing shows how the depolarization wave, which is a wave of positive charge, moves during each heartbeat, by providing the perspectives of different sets of electrodes. This particular set of electrodes is called lead II; one electrode is placed on the right arm and the other on the left leg. Essentially, when the wave’s moving toward the left leg electrode, you get a positive deflection. This big, positive deflection corresponds to the wave moving down the septum. To read an ECG, there are a few key elements to keep in mind; one is to figure out if part of the heart is suffering from ischemia or has undergone an infarction.

In the heart, ischemia and infarction can be transmural, affecting the entire thickness of the myocardium, or subendocardial, affecting just the innermost part of the myocardium, the part just beneath the endocardium. Out of the four chambers of the heart, the ECG is most sensitive to transmural and subendocardial ischemia or infarction in the left ventricle because that’s the chamber with the thickest walls; in other words, it has the most cardiac tissue.

All right, let’s start with subendocardial ischemia. This might happen when there’s incomplete blockage, let’s say 70%, in a coronary artery. In this situation, there’s enough blood flowing through to meet the demand of the myocardium when the person is at rest, but during exercise, there’s not enough to meet the increased demand of the myocardium. Therefore, the subendocardial tissue becomes ischemic because it’s the last bit of tissue to receive blood from the tiny branches of the coronary arteries as they make their way through the ventricular wall, from outside to inside. This condition is called stable angina, because there’s ischemia that causes chest pain with exercise, and the pain disappears with rest.

Next, there’s transmural ischemia. When a coronary artery is narrowed from an atherosclerotic plaque buildup over time, there are two parts to the plaque: a hard fibrous cap and the soft cheese-like interior. As blood flows past the plaque, the fibrous cap can sometimes rip. That cheesy interior is considered thrombogenic, meaning that blood clots form on it very quickly; these can quickly stop blood flow! This means that none of that wall gets adequate blood flow. It happens during unstable angina or during a non-ST elevation myocardial infarction, or NSTEMI for short. The key difference is that in an NSTEMI, the ischemia is so severe that damaged heart cells leak out certain enzymes, such as troponin and CK-MB.

On an ECG, both unstable angina and NSTEMI’s may show ST depressions and T wave inversions. These ST depressions look similar to the ones in subendocardial ischemia. The T wave inversions are usually symmetrical, and are at least 1 mm, or 1 little box deep. They are most noticeable in the chest leads, but can also appear in the limb leads. They also have to occur in at least two contiguous leads. For example, lead V2 and V3 are contiguous, but leads V3 and V5 are not contiguous. They also occur with a dominant R wave, which means that the R wave has a higher amplitude than the S wave. Now, it turns out that a little bit of T wave inversion can be normal in in leads III, aVR, and V1, but any sign of T wave inversion in leads V2 to V6 is abnormal.

Next, let’s look at subendocardial infarction. If the coronary artery remains blocked for around 20 minutes, the subendocardial cells begin to die, which results in necrosis. Just like in subendocardial and transmural ischemia, there’s ST depression. Given that there’s necrosis, we’d expect there to be leakage of troponins and CK-MB, so this would be an infarction without ST elevation, an NSTEMI, which can again show ST depression and T wave inversion.