An investigator is studying the effects of carbon monoxide (CO) on the electron transport chain (ETC). Which of the following best describes the effect of CO on ETC? 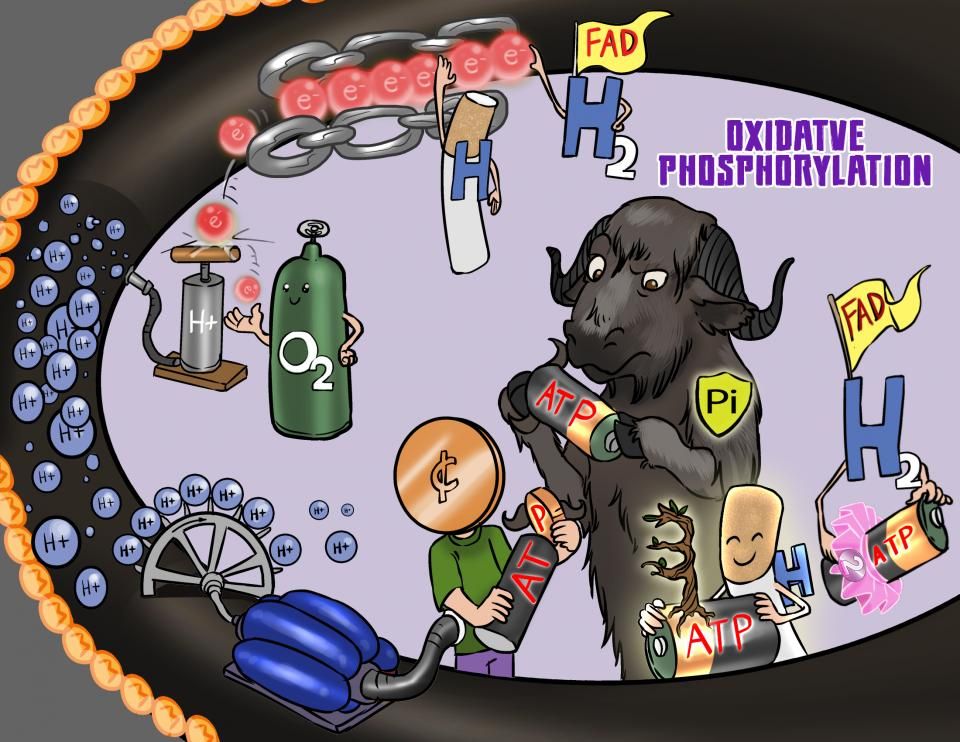 Your heart is constantly working. Whether you’re swimming or taking a nap, your heart is always on the go.

The main form of energy that keeps our heart cells, and really all of our body cells, going is adenosine triphosphate, or ATP.

In most cells, the main ATP producing factory is the mitochondria, which has an inner and an outer membrane, and it’s along the inner membrane where a process called oxidative phosphorylation occurs.

“Oxidative” refers to oxidation - which is when a molecule donates its electron, and “phosphorylation” which refers to the addition of a phosphate group to adenosine diphosphate, or ADP, to form ATP.

So oxidative phosphorylation is the process of making ATP by donating electrons to complexes embedded within the inner mitochondrial membrane.

These complexes are proteins or lipids coupled with metals like iron and copper that facilitate the movement of electrons.

Together, they form the electron transport chain.

During the electron transport chain, electrons are passed on from complex to complex, and finally to oxygen, creating a proton gradient that will be used to make ATP.

And when those molecules are coming from the cytoplasm they can only enter the mitochondria using a specific shuttle.

When using the malate-aspartate shuttle, electrons enter the electron transport chain as NADH.

There are two entry points into the electron transport chain.

The first point of entry, is where NADH gives its electrons to Complex I.

Complex I contains flavin mononucleotide - a derivative of riboflavin or Vitamin B2 - and iron-sulfur centers called FeS.

NADH gives its electron to flavin mononucleotide, and it gets turned back to NAD+, and can then be re-used by dehydrogenases to make more NADH.

The second point of entry, is where FADH2 gives its electron to Complex II, which is also called succinate dehydrogenase - the exact same enzyme that takes part in the citric acid cycle!

That means that citric acid cycle and electron transport chain actually share a step, so their activity rises and falls together.

Ultimately, electrons from complexes I and II flow directly to Coenzyme Q, which is also called ubiquinone.

Coenzyme Q is actually a cholesterol derivative and therefore the only lipid in the electron transport chain.

Next coenzyme Q passes on the electrons to a series of cytochromes, which are proteins that contain heme groups.

Heme groups contain iron, which is able to grab an electron and go from Fe3+ to Fe2+.

The heme iron can then release the electron to the next cytochrome in the chain and go back to Fe3+, so that it’s ready to grab another electron.

It’s a bit like factory chain workers relaying the electrons between one another!

Interestingly, the heme groups of complex IV contain copper rather than iron.

Now, if a cell doesn’t receive enough oxygen, like in hypoxia, which is the most common cellular injury, then electron transport chain gets interrupted and ATP synthesis doesn’t happen.

So the complexes are responsible for the “oxidative” part of oxidative phosphorylation - and you can think of the electron transport chain as a game of hot potato - with the complexes rapidly passing electrons off to one another, creating an electrical current.

That’s because complexes I, III, and IV are the only ones to span the inner mitochondrial membrane.

In fact, as the electrons are hopping through, the complexes are changing their conformation to push protons across.

It’s a bit like how electrons hop wires in a home, and that energy can be used to do work - like plugging in a vacuum to suck up dirt.

In this case, the little complexes would be the vacuums, sucking up protons.

Now, this gradient is considered unstable because the protons are always trying to equilibrate across the inner mitochondrial membrane, even though it’s totally impermeable to them.

To get across, protons have to use a special proton channel called F0, that’s attached to an enzyme called F1. F1 is an ATP synthase that uses the proton gradient to phosphorylate an ADP molecule and make ATP - so ATP synthase is in charge of the “phosphorylation” step of oxidative phosphorylation.