A 64-year-old man comes to the emergency department because dysphagia, regurgitation of undigested food, and chest pain behind the sternum after a recent esophageal dilation procedure. He is diagnosed with achalasia and develops fever and his chest pain progressively worsens. His temperature is 102.4°F, pulse is 110/minute, and blood pressure is 92/56 mm Hg. A chest X-ray shows curvilinear lucencies outlining the mediastinal contours. Which of the following is the most likely diagnosis? 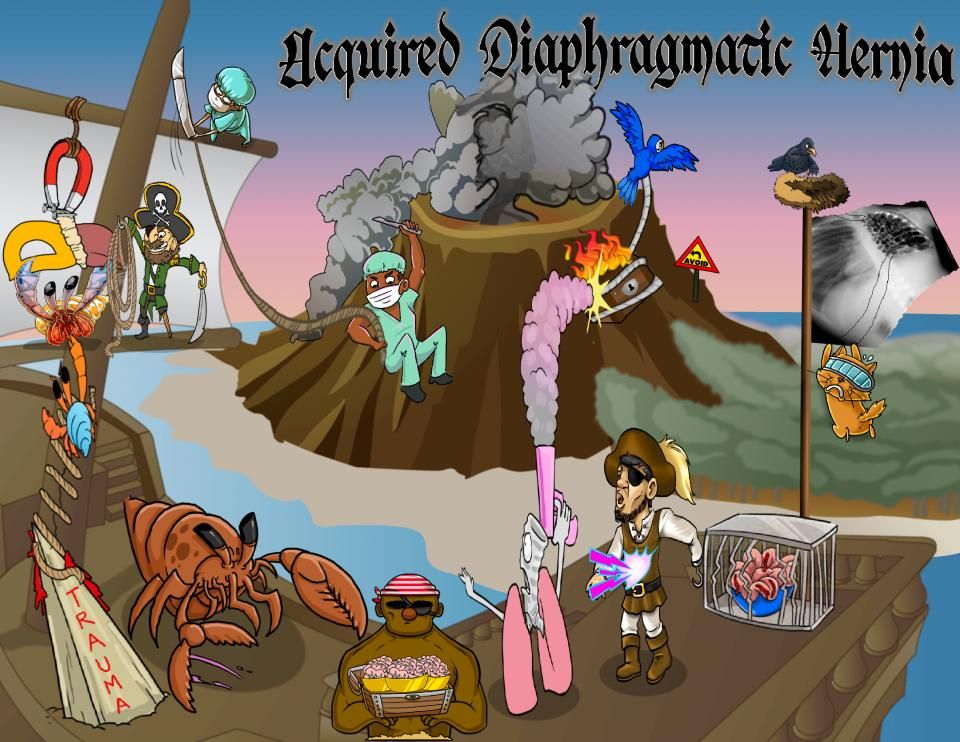 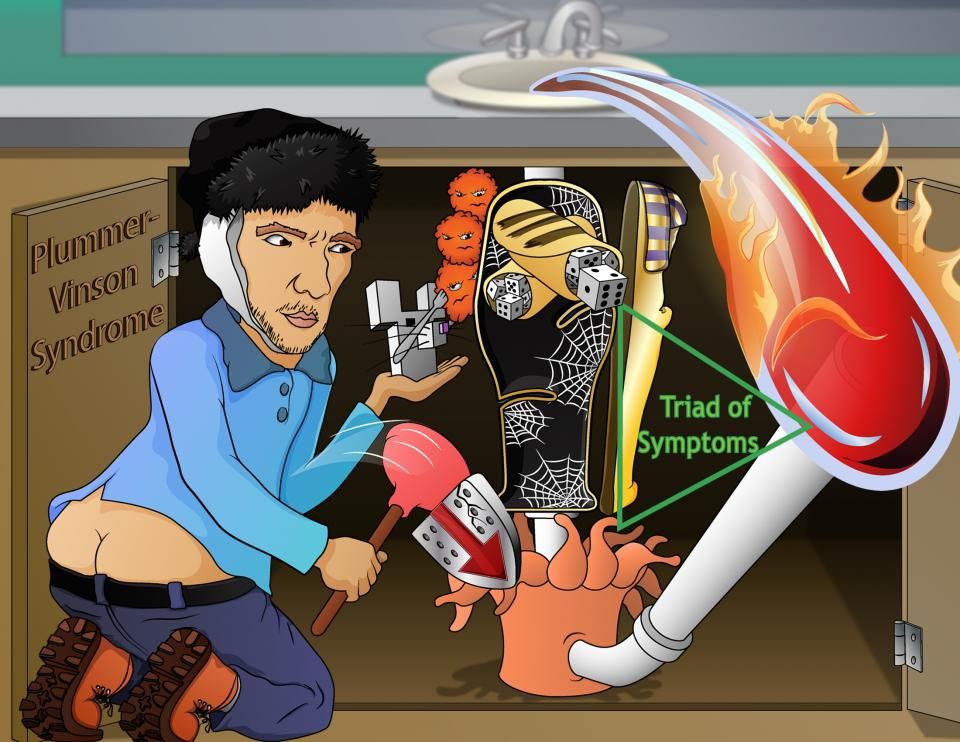 You can think of the esophagus as a 25 to 30 centimeter long tube, that has a wall composed of 4 layers.

The esophageal mucosa is made of different layers, there’s an inner stratified squamous epithelium layer, the submucosa, a muscular layer that’s made of skeletal muscle in the upper third, smooth muscle in the lower third, and a combination of the two in the middle; and finally an outer layer of connective tissue called adventitia.

At the top and bottom of the esophagus there are the upper and lower esophageal sphincter, respectively.

Both relax during swallowing to allow the passing of food or liquids propelled by peristaltic contractions.

Additionally, the lower esophageal sphincter prevents acid from refluxing back into the esophagus between meals.

There are three main ways to evaluate the esophagus.

First, there’s an upper gastrointestinal tract radiography or a Barium swallow which uses orally ingested barium as contrast for an X-ray of the esophagus, stomach, and duodenum.

Second, there’s an upper endoscopy which is when a flexible tube with a camera is sent through the mouth to visualize the esophagus, stomach, and duodenum - and take a biopsy if needed.

Third, is esophageal manometry which is where a pressure-sensitive catheter is inserted through the nose and sent into the esophagus to measure the strength of peristaltic contractions, esophageal sphincters contractions during swallows.

There are two types of esophageal manometry.

In Classical manometry there are 4 to 8 pressure sensors placed at different levels of the esophagus and a normal reading looks something like this.

There are a number of esophageal conditions that can be treated surgically.

First, there’s Zenker’s diverticulum which is where the esophageal mucosa and submucosa of the esophagus slide through an area of muscle weakness right above the upper esophageal sphincter, forming a pouch-like structure sticking out from the wall of the esophagus. It causes symptoms like intermittent oropharyngeal dysphagia, as well as halitosis or bad breath as food accumulates in the pouch.

A Zenker's diverticulum is usually diagnosed with a barium swallow, and an upper endoscopy is not recommended because it can cause perforation.

The reason for the myotomy is that upper esophageal sphincter dysfunction could have led to the diverticulum.

Increasingly, open surgery has been replaced by endoscopic diverticulotomy and myotomy, with a rigid or a flexible endoscope.

Next up is achalasia, and that’s where esophageal peristalsis is ineffective at moving food and liquids through the esophagus.

In addition, the lower esophageal sphincter doesn’t completely relax during swallowing, so that leads to food accumulation, and dilation of the distal esophagus. Symptoms include progressive dysphagia for both solids and liquids, regurgitation of undigested food, chest pain, and weight loss.

Over time it can lead to severe dilation or megaesophagus, which is when the esophagus has a diameter of over 6 centimeters.

On a Barium swallow the esophagus is dilated and has a narrow lower sphincter - this is called the bird’s beak sign.

An upper endoscopy should also be done to check for esophageal cancer.

High resolution manometry is the best way to confirm achalasia. It can show absent peristalsis, and high pressure at the lower esophageal sphincter.

The most effective option is a called a Heller laparoscopic myotomy. That’s where a small cut is made in the lower sphincter to relieve the pressure, and this usually works for over 10 years.

Sometimes anti-reflux fundoplication surgery is done at the same time to prevent development of GERD. That’s where the fundus of the stomach is wrapped, or plicated, around the lower end of the esophagus and stitched in place, reinforcing the closing function of the lower esophageal sphincter.

Surgery for achalasia is generally accompanied by either a Dor or Toupet partial fundoplication, which is less likely than a Nissen wrap to worsen the dysphagia.

Another option is a Per-oral endoscopic myotomy or POEM, which is where an incision is made in the esophageal mucosa.

An endoscope is passed through that incision and into the esophageal submucosa, and is tunneled through the submucosa distally into the gastric cardia.

Once the circular fibers of the lower esophageal sphincter are encountered, they are divided all the way down onto the first part of the stomach to functionally weaken the sphincter.

Finally, the submucosal flap is closed using clips or sutures also placed through the endoscope.

When a POEM is done, a fundoplication is not usually done, so it can result in GERD.

Now, individuals over age 40 are considered high risk for a myotomy procedures, so they usually undergo a pneumatic dilation. That’s where a balloon is inserted through an endoscope into the esophagus at the level of the lower esophageal sphincter, and filled with air for about 45 seconds to stretch out the muscle layer.

Pneumatic dilation is less invasive than surgical myotomy, and works for up to 2 years before the efficacy begins to wane. The dilation can be repeated, but the success rate begins to fall off after a third dilation, because there’s a progressive fibrosis or scarring of the lower sphincter with each dilation.

Individuals over 65 years are poor candidates for myotomy and pneumatic dilation, so they’re often treated with botulinum toxin that’s injected directly into the lower esophageal sphincter through an endoscope.

The least effective therapy option for achalasia are medications like nitrates and calcium channel blockers, like nifedipine.

For end-stage achalasia, sometimes the only effective option is an esophagectomy, so removal of the esophagus, plus gastroplasty or coloplasty, which is reconstruction with the stomach or colon, respectively.

Individuals often have retrosternal chest pain and intermittent dysphagia for both solids and liquids, but they rarely have regurgitation.

On a barium swallow, the esophagus will have a corkscrew or rosary bead appearance. Again, high resolution manometry is the gold standard, and it shows uncoordinated high-amplitude peristaltic contractions.

Because diffuse esophageal spasm is intermittent, these findings might only be seen on some test swallows or on some days of testing.

Treatment options are similar to achalasia, but the order is reversed.

In severe cases, pneumatic dilation and botulinum injection therapy can be used, but they’re only short term measures.

In extremely rare cases, laparoscopic myotomy may be considered.

Next, there’s GERD, which occurs when the resting pressure of the lower esophageal sphincter is below 10 millimeters of mercury, because that allows gastric acid to flow into the esophagus.

In addition, some individuals have weight loss, iron deficiency anemia, anorexia, odynophagia or painful swallowing, and upper gastrointestinal bleeding; all of which are symptoms that can also be seen in esophageal cancer. In these situations, an upper endoscopy and biopsy can be done.