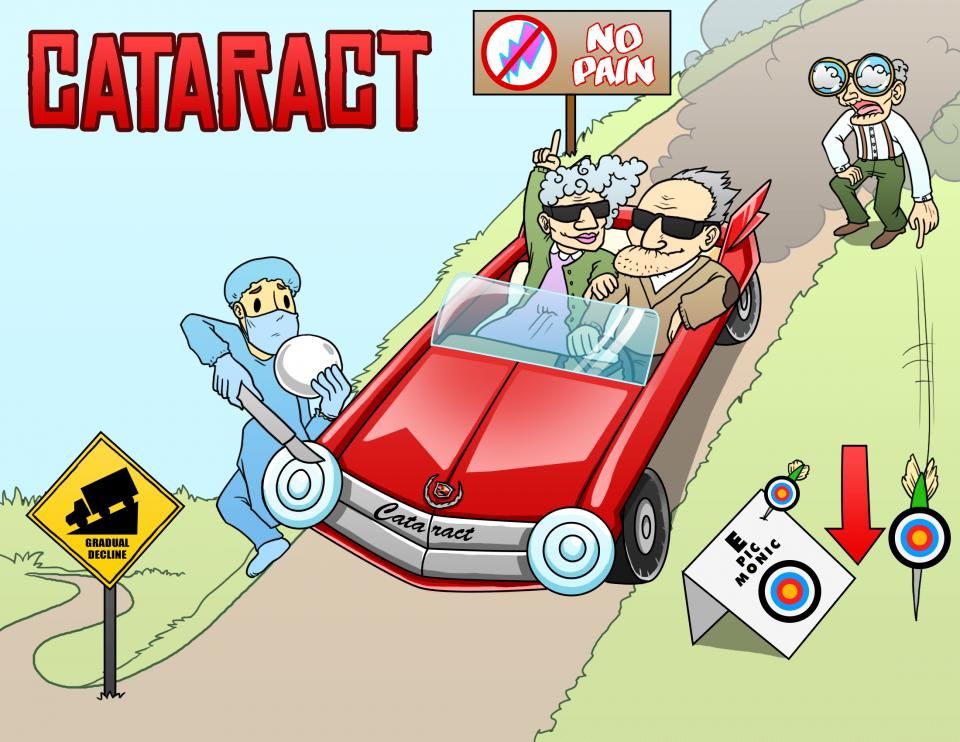 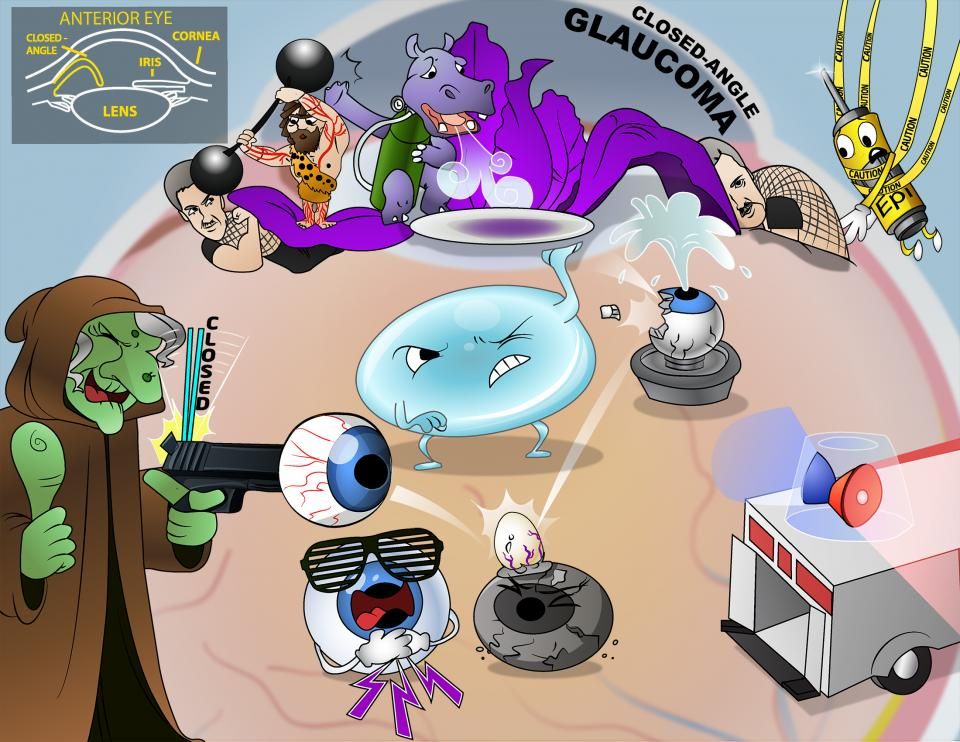 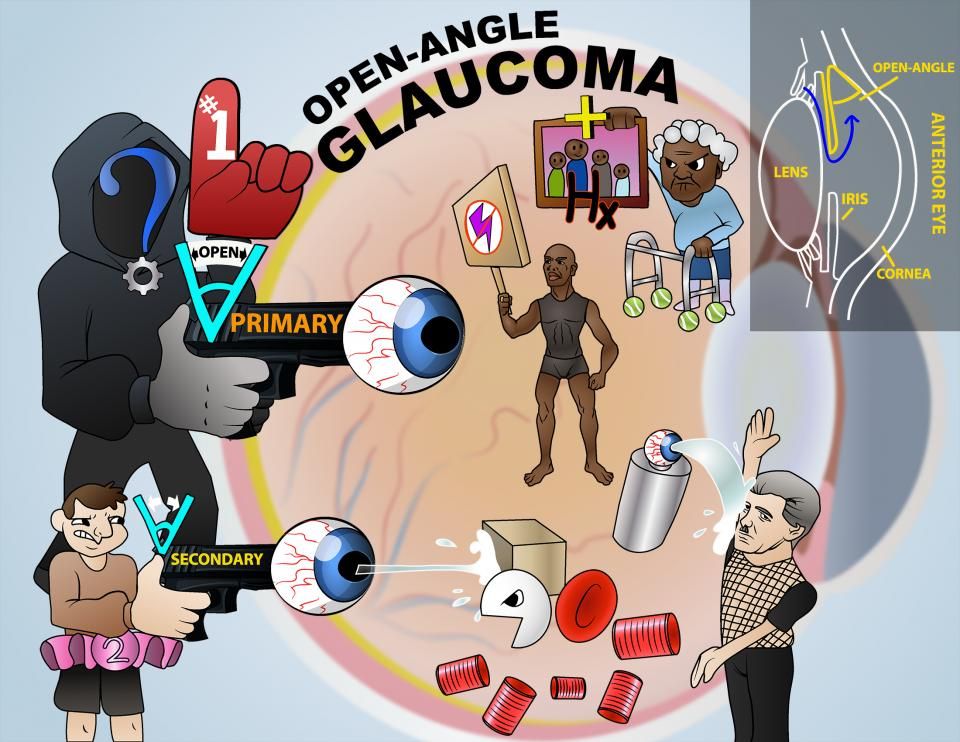 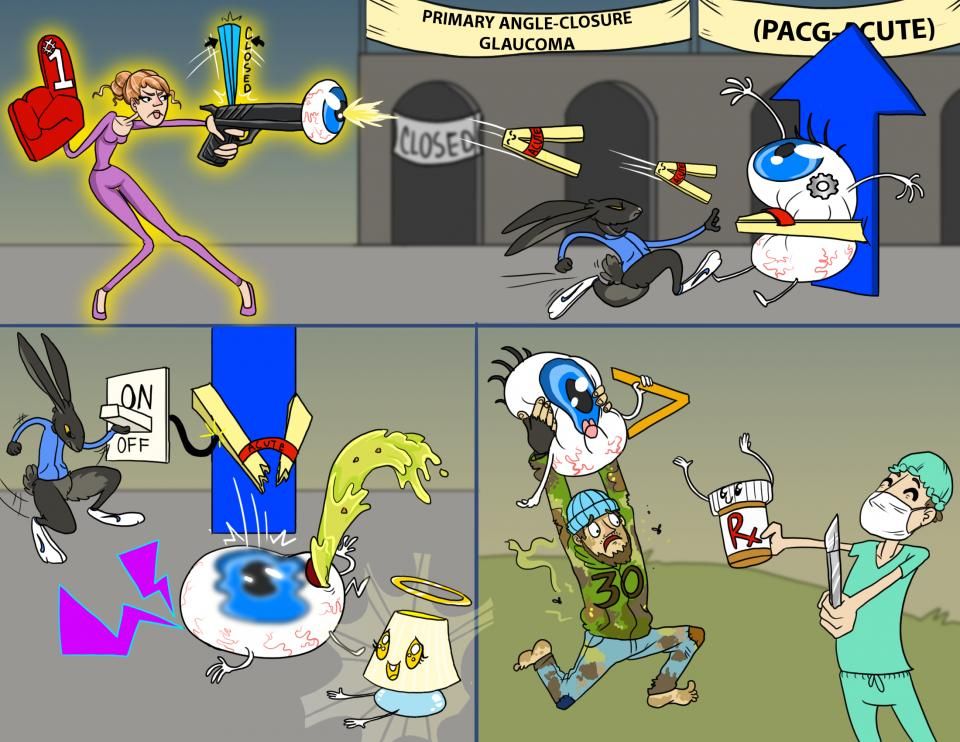 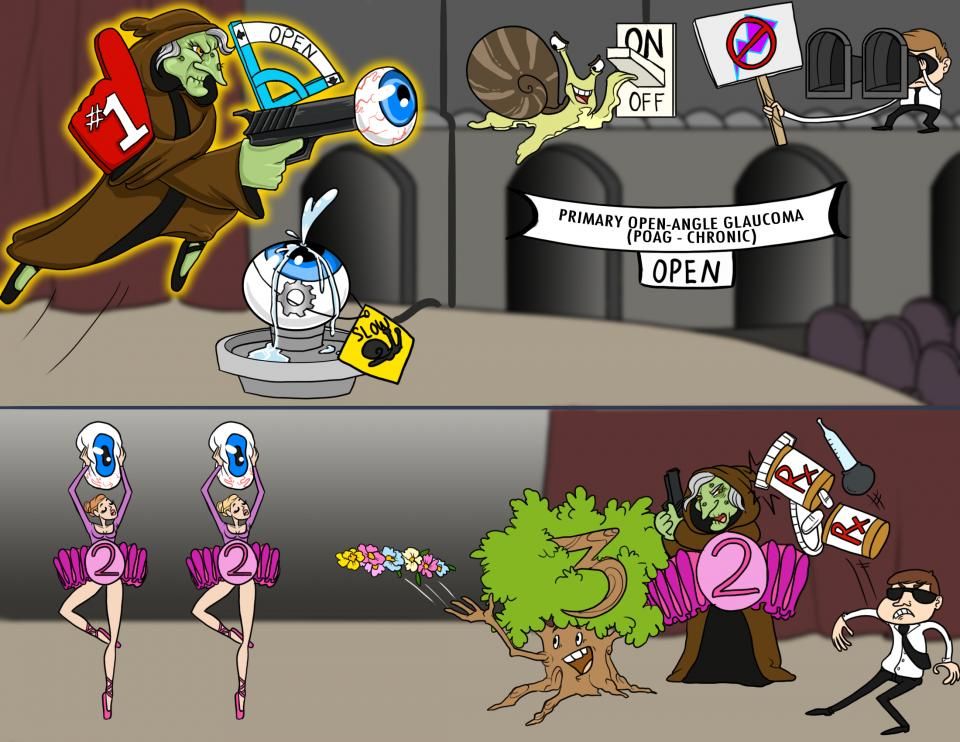 At the ophthalmology clinic, 61-year-old Pedro presents with vision impairment that has been progressive over the past couple of years. He denies experiencing any pain. His past medical history is significant for type 2 diabetes mellitus. Physical examination shows bilateral clouding of the lens.

Next to him, 68-year-old Eileen comes in. She complains that, about an hour ago she started experiencing excruciating pain in her right eye, accompanied by blurry vision and seeing halos around bright lights. Eileen also tells you that she has since vomited twice. On clinical examination, her right eye is red, with a dilated pupil that fails to react to light. Her left eye appears unremarkable.

Based on the initial presentation, both Pedro and Eileen have some form of eye condition. But first, a bit of physiology. If we take a closer look at a cross-section of an eye, we can see that it’s split into three different chambers: anterior, posterior, and vitreous. The anterior chamber includes the area from the cornea to the iris. The posterior chamber is a really narrow space between the iris and the lens. Finally, the much larger vitreous chamber includes the space between the lens and the back of the eye.

Okay, let’s start with what’s probably the most common group of eye conditions, so refractive errors. Normally, when the eye is in a relaxed state, the refractive power of the cornea and lens help focus light onto the retina. The retina is like a movie screen and the distance from the projector is the axial length of the eye. If it’s too close or too far from the projector, the image will end up looking blurry or out of focus. When the lens and cornea can focus light perfectly on the retina, it’s called emmetropia.

In hyperopia, also known as farsightedness, the axial length of the eye is too short for the refractive power of the cornea and lens, so the light ends up focusing behind the retina. Hyperopia can be corrected with convex or converging lenses.

In myopia, also known as nearsightedness, the axial length of the eye is too long for the refractive power of the cornea and lens, so the light focuses in front of the retina. Myopia can be corrected with concave or diverging lenses.

In astigmatism, there is an abnormal curvature of the cornea, which results in various refractive power at different axes. Astigmatism can be corrected with cylindrical lenses. Finally, there’s presbyopia, where increasing age causes changes in the lens’s curvature, as well as a decline in the elasticity of the lens and the strength of the ciliary muscle, which normally controls accommodation of the lens to see objects at different distances. As a result, presbyopia impairs accommodation or focusing on near objects, which can be corrected with magnifying reading glasses.

Okay, let’s switch gears and discuss cataracts. This refers to clouding or opacification of the lens and it can be congenital or acquired. The main risk factors for congenital cataract include congenital infections. For your exams, these infections can be remembered with the acronym TORCH, which stands for Toxoplasma, Other infectious agents, usually syphilis; Rubella; Cytomegalovirus, and Herpes simplex virus. Other risk factors for congenital cataract include genetic conditions, such as trisomies 13, 18 and 21, Marfan syndrome, Alport syndrome, Refsum disease, myotonic dystrophy, neurofibromatosis type 2, and inborn errors of metabolism like galactosemia. For your exam, remember that galactosemia can be type I caused by a deficiency in galactose-1-phosphate uridyltransferase; or type II which is caused by a deficiency of galactokinase.

Type I is the more common type so it’s also called classic galactosemia. Here, excess circulating galactose is converted to galactitol by the enzyme aldose reductase. Galactitol then accumulates in the lens, creating a hypertonic environment that pulls in water, results in the swelling of lens fibers until they rupture, and this is called osmotic cellular injury.

Now, when it comes to acquired cataract, risk factors include advanced age, usually above 60, smoking, excessive alcohol use, eye trauma and infections, exposure to UV light, prolonged use of medications like glucocorticoids, and diabetes mellitus. For your exams, note that the mechanism behind cataracts in diabetes mellitus, is similar to that in galactosemia. So, when there’s hyperglycemia, the excess circulating glucose is converted to sorbitol by aldose reductase. Sorbitol then accumulates in the lens, causing osmotic cellular injury.

Now, the main symptom of cataract is painless visual impairment that’s often bilateral and progresses slowly over many years. For your exams, bear in mind that congenital cataract may also manifest with leukocoria or “white pupil”, which is an abnormal white reflection from the retina of the eye, also called a white pupillary reflex. Remember that another cause of leukocoria is retinoblastoma. Diagnosis of cataracts includes slit lamp examination, which shows loss of lens transparency, and treatment is surgical removal of the lens nucleus.

Another high-yield ophthalmologic condition is glaucoma. Normally, the aqueous humor is secreted by the ciliary epithelium into the posterior chamber; then flows through a narrow space between the front of the lens and the back of the iris, and through the pupil to the anterior chamber.

From here, the fluid flows out of the eye through the trabecular meshwork, goes down into a circular channel, called the canal of Schlemm, and, finally, into the aqueous veins. A small fraction of the aqueous humor follows the uveoscleral pathway, draining across the uvea and sclera to get reabsorbed by orbital vessels.