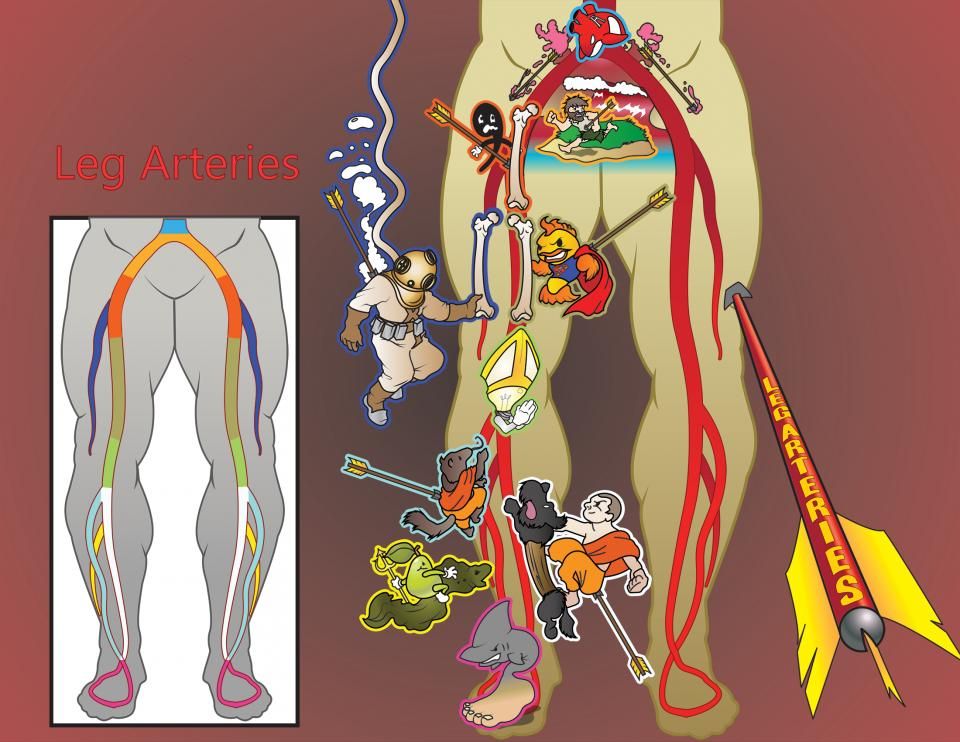 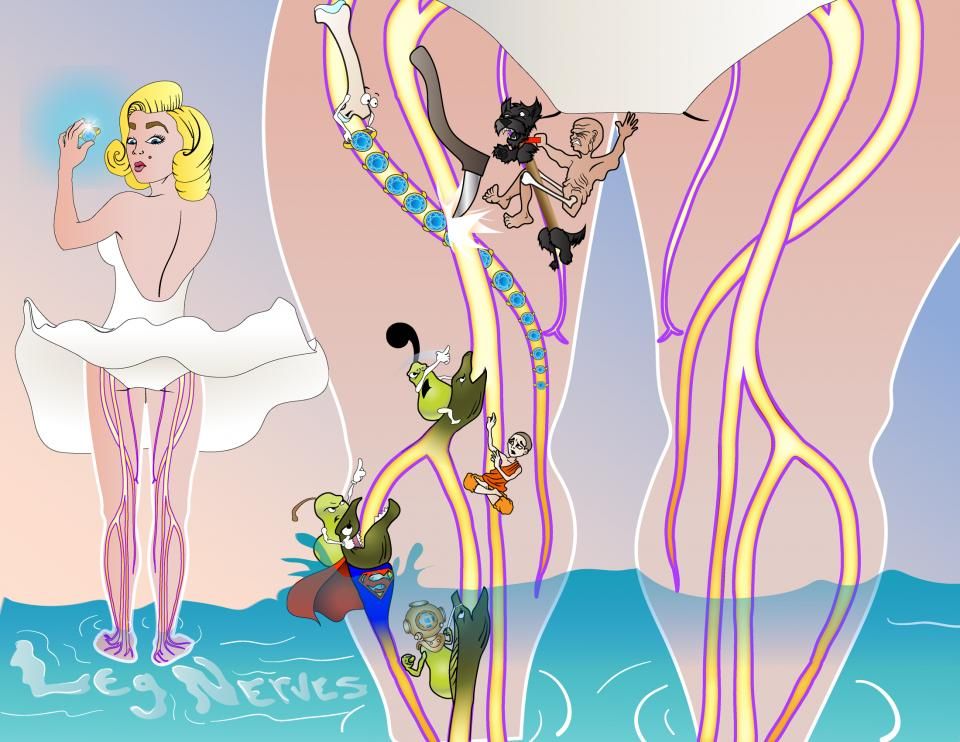 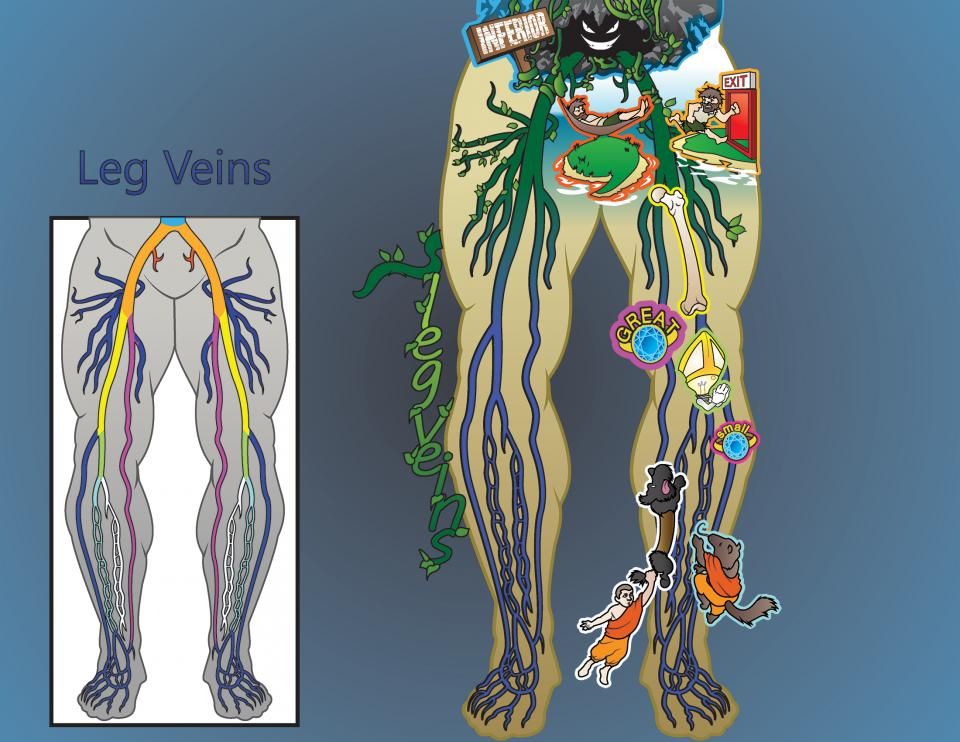 The lower limb contains an intricate metro system of blood vessels, muscles, and nerves. These structures are wrapped up and organized into different compartments by superficial and deep fascia layers, and together, they form the multifunctional limbs we know as legs.

Let’s begin with fascia, which is... well, what is it anyway? You can think of fascia as a pair of thin stockings made of connective tissue that support and bind together different parts of the body, including the lower limbs.

Ok, so the superficial fascia - also known as subcutaneous tissue - is located directly deep to the skin and consists of loose connective tissue, with variable amounts of fat. It contains arteries, veins, nerves, lymph vessels and lymph nodes.

Moving on, deep fascia is especially strong and elastic, allowing it to limit the outward expansion of contracting muscles, and act as a barrier to help compress the veins, which in turn, propel blood towards the heart.

Superiorly, the fascia lata attaches to the inguinal ligament and pubic bone anteriorly, to the iliac crest laterally and posteriorly, and to the sacrum, coccyx, sacrotuberous ligaments, and ischial tuberosity posteriorly.

It also attaches to the membranous layer of subcutaneous tissue of the inferior abdominal wall, also called Scarpa fascia, just inferior to the inguinal ligament.

Regarding its inferior limits, anteriorly and on both sides of the knee, fascia lata attaches to the subcutaneous bony prominences of the knee joint and is continuous with the deep fascia of the leg inferior to the knee. That was a mouthful, wasn’t it?

The fascia lata encloses the large thigh muscles, and is thickened laterally, by an excess of longitudinal fibers, to form the iliotibial tract.

The iliotibial tract, which extends from the iliac tubercle superiorly to the anterolateral tubercle of the tibia inferiorly, also known as Gerdy tubercle. It is the shared aponeurosis of the tensor fasciae latae and gluteus maximus muscle.

And in case you were wondering, an aponeurosis is a type of deep fascia consisting of a sheet of pearly-white fibrous connective tissue that helps attach sheet-like muscles needing a wide area of attachment.

Out of the three, the lateral intermuscular septum is the strongest and extends from the iliotibial tract to the lateral lip of the linea aspera and lateral supracondylar line of the femur.

Now, the septa and the fascia lata form the walls of three thigh muscle compartments—anterior, medial, and posterior. Each of these compartments contain and separate the muscles of the thigh based on function, and also house their own neurovascular structures associated with those muscles.

The anterior compartment lies between the lateral and medial intermuscular septa, and contains muscles that flex the hip joint and extend the knee joint.

There’s also an oval gap in the fascia lata - the saphenous opening, which is located inferior to the medial part of the inguinal ligament in the anteromedial thigh.

The center of the opening is about 4 centimeters below and lateral to the pubic tubercle and is about 3.75cm in length and 2.5cm in breadth.

The saphenous opening is not actually an opening since it is usually covered by a curtain of fat and fibrous tissue called the cribriform fascia. “Cribriform” comes from Latin, and it means “sieve”, or “strainer”.

So the cribriform fascia is pierced by numerous structures such as the great saphenous vein before it drains into the femoral vein, the superficial epigastric and superficial external pudendal vessels, and a few lymph vessels containing superficial and deep inguinal lymph nodes.

This deep fascia attaches to the anterior and medial border of the tibia, where it is continuous with the bone’s outer layer - the periosteum. Posteriorly, behind the knee, it forms the popliteal fascia, which covers the popliteal fossa.

Proximally, the fascia is thick and forms part of the proximal attachments of the underlying muscles. And distally, the deep fascia of the leg forms thickened horizontal bands of tissue, both superior and anterior to the ankle joint, called the extensor retinaculum.

The septa, together with interosseous membrane, which is a membrane that unites the fibula and tibia, divide the leg into three compartments. There is a lateral compartment, separated by the anterior and posterior septa, which contains the evertors of the foot.

The anterior compartment is separated by the anterior septum and interosseous membrane, and it contains the muscles that invert the foot and extend the ankle joint. By the way, a fancy word you might want to remember for extension of the ankle joint is “dorsiflexion”.

Let’s instead take a break and try to recognize some of the most important features of the fascia of the lower limb! Now, let’s focus on the veins of the lower limb. These can be divided into superficial veins and deep veins.

The superficial veins are located in the superficial fascia or subcutaneous tissue, and therefore, they run independent of major arteries. So, unlike other major veins of the body that are named according to the arteries they travel with, these are named on their own.

You can think of valves as elastic flaps of endothelium with cup-like cusps that fill from above. When they are full, the valve cusps block the lumen of the vein, preventing reflux of the blood distally, as blood tends to flow downward, due to gravity.

The valves preventing backflow, combined with the compression exerted by muscle contraction, forms the musculovenous pump, which overcomes the force of gravity to return the blood to the heart.

Higher up, tributaries from the medial and posterior parts of the thigh frequently unite to form the accessory saphenous vein. When present, this vein becomes the main communication between the great and small saphenous veins.

Moving on, the small saphenous vein arises on the lateral side of the foot from the union of the dorsal vein of the little toe with the dorsal venous arch.

The small saphenous vein ascends posterior to the lateral malleolus, it passes along the lateral border of the calcaneal tendon, and then it ascends roughly in the middle of the leg before piercing the deep fascia.

From here on, it ascends between the heads of the gastrocnemius muscle, until it reaches the popliteal fossa, or the space behind your knee, to empty into the popliteal vein.

Ok, now, bear in mind that the superficial and deep venous systems communicate with each other, and blood is continuously diverted from these superficial veins to the deep veins via the perforating veins.

Perforating veins are called that because they perforate the deep fascia of muscles to connect the superficial veins to the deep veins, and they contain valves which only allow blood to drain from superficial to deep.

These perforating veins are also important to the mechanism of the musculovenous pump because as they pass through the deep fascia, they are compressed during muscular contraction.

This prevents blood from flowing from the deep to superficial veins, and directs venous blood to the heart. Now let’s look at the deep veins of the lower limb, which lie in the fascial compartments formed by the deep fascia.

Now, the veins and the artery they follow are wrapped up within a vascular sheath. As the muscular arteries undergo pulsatile contractions, they compress the deep veins against the vascular sheath, propeling blood towards the heart.

Ok, so the main deep venous structures of the foot begin from the medial and lateral plantar veins, which arise from the deep plantar venous arch on the plantar aspect of the foot.

The medial and lateral plantar veins travel proximally to the posterior side of the medial malleolus, where they unite to form the posterior tibial vein. They also often contribute to the formation of the fibular vein which ascends posterior to the fibula.

The popliteal vein travels upward through the popliteal region until it reaches the adductor hiatus where it enters the thigh and becomes the femoral vein.

The femoral vein accompanies the femoral artery throughout its upward trajectory in the thigh, until it reaches the inguinal ligament and leaves the thigh, at which point it is known as the external iliac vein.

Overall, deep veins are more variable and they anastomose much more frequently than the arteries they accompany. See? All that hard work was not in “vein” - because we’ve actually reached the end of this section. Time for a break and for you to recognize some high-yield landmarks.

These lymph nodes are separated into two groups, the horizontal group which is about 2 centimeters below the inguinal ligament, and the vertical group, which is around the proximal end of the great saphenous vein.

Veins of the lower limb also fall into two main categories, the superficial and deep veins. The superficial veins pass are those found within the subcutaneous tissue, whereas the deep veins are located in the deep fascia and move along major arteries.