A 6-day-old boy is brought to the emergency department by his parents because of easy bruising. The infant was born at 38 weeks to a 23-year-old primigravida woman via normal vaginal delivery at home. This is his first medical evaluation. The patient’s mother took prenatal vitamins and maintained a healthy diet during pregnancy. Family history is unremarkable. Vitals are within normal limits. Physical examination reveals an alert infant. Examination shows multiple ecchymoses visible on upper and lower extremities. The remainder of the examination is unremarkable. Laboratory results are shown.

Which of the following is the most likely cause of this infant’s presentation?
Memory Anchors and Partner Content 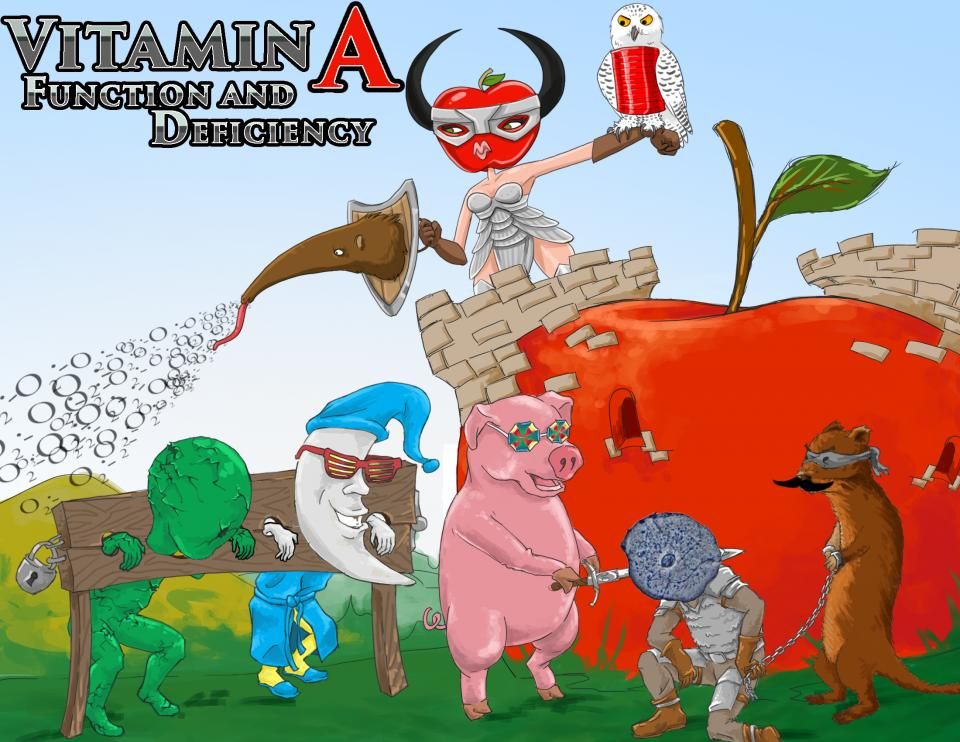 Vitamin A (Retinol) Function and Deficiency 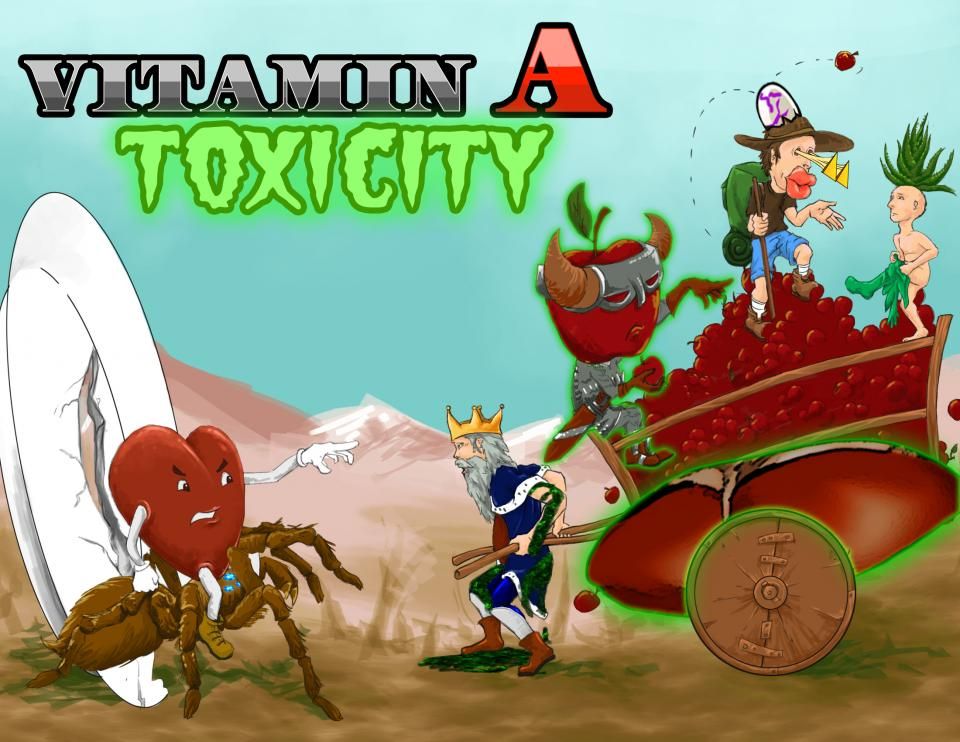 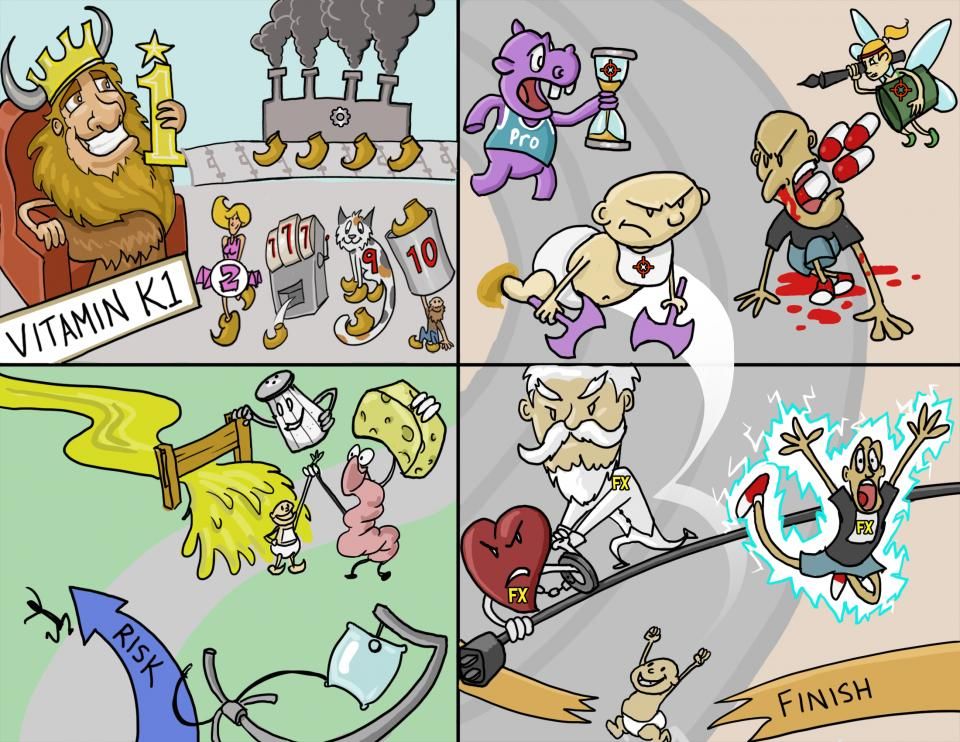 At the clinic, 32 year old Naya comes in with bilateral hip pain. She exercises regularly and has not changed anything in her routine recently. She mentions that she has recently also started to experience blurry vision, and has scheduled an appointment with her ophthalmologist. In addition, she mentions that her skin is unusually dry, which hasn’t improved with moisturizing cream. She takes several tablets of cod liver oil supplements daily. Physical examination reveals an enlarged liver and spleen. Next to her, 2 year old Lorenzo has been brought to the clinic by his mother for a yearly pediatric checkup. He was diagnosed with chronic kidney disease about one year ago in Italy. They then migrated to the United Kingdom. On examination, there is lateral bowing of the legs, as well as beading of the ribs along the anterior side of the chest.

Based on the initial presentation, both Naya and Lorenzo seem to have some form of fat- soluble vitamin deficiency or toxicity. Fat- soluble vitamins include vitamins A, D, E, and K. Just like all vitamins, they need to be attained by diet. So, inadequate dietary consumption can be the cause of their deficiency. In a test question, some big clues are that the affected individuals often come from lower income countries or have an eating disorder like anorexia nervosa. Now, in the small intestine, fat- soluble vitamins are absorbed along with dietary fats, which means that anything affecting fat absorption can also affect the absorption of fat-soluble vitamins. Fat malabsorption typically presents with steatorrhea, meaning fatty, greasy, floating, voluminous, and terribly smelling stools. But a deficiency of fat-soluble vitamins might be the only clue you get for that. Now, causes of fat malabsorption can be broadly divided into two major groups: digestive disorders where the food can’t be broken down in the intestinal lumen, and absorption defects where the intestinal mucosa can’t take in the nutrients.

For your exams, the most common digestive disorders are exocrine pancreatic insufficiency and cholestasis. In exocrine pancreatic insufficiency, there’s a lack of pancreatic digestive enzymes, including lipase, which breaks down lipids. Now, what’s important to remember is that exocrine pancreatic insufficiency typically results from chronic pancreatitis, which is inflammation of the pancreas leading to the destruction of its exocrine portion. In adults, the greatest risk factor for chronic pancreatitis is alcohol abuse, whereas if you see chronic pancreatitis in a child, remember that the number one cause is cystic fibrosis. Fat digestion could also be affected by cholestasis, where not enough bile is reaching the intestine to emulsify fats and make them easier to absorb. Cholestasis can be hepatocellular, where hepatocytes don’t make enough bile, and commonly tested causes include increased estrogen like in pregnancy or oral contraceptive use. It could also be due to obstruction where something’s physically blocking bile flow. In a test question, think of obstructive cholestasis if you see a tumor in the head of the pancreas, primary sclerosing cholangitis, in an individual with a history of inflammatory bowel disease, or biliary atresia in a newborn.

Fat malabsorption can also be caused by absorption defects. Here we have diseases that cause damage to the small intestine mucosa, reducing the surface area available for absorption. These include celiac disease, which is an autoimmune condition where the gluten in food triggers the body’s immune cells to attack the intestinal mucosa. There’s also tropical sprue, which is thought to be the result of bacterial overgrowth in the intestines, and mostly affects tropical regions of the world, like the Caribbean, India, and Southeast Asia. Finally, there’s Whipple’s disease, which is caused by Tropheryma whipplei. Remember that Whipple’s disease also affects large joints, causing migratory arthralgias.

Okay, now, another high- yield fact for fat- soluble vitamins is that they can be stored in fat cells instead of getting excreted in the urine. And that is why their toxicity, also known as hypervitaminosis, is way more common than that of water- soluble vitamins. The number one cause of hypervitaminosis is excess intake of vitamin supplements, highly fortified foods, or medications containing a derivative of the vitamin.

Okay, now let’s dive into the various fat- soluble vitamins. Let’s start with vitamin A, also known as retinol, which is found mostly in fruits, leafy vegetables, as well as animal liver products, egg yolk, and dairy products. Normally, vitamin A is essential for the production of rhodopsin, which is an eye pigment found in the retina that allows us to see in dark or dim lighting. Other important functions of vitamin A include helping epithelial cells differentiate, and functioning as an antioxidant that helps boost the immune system.

Now, for clues of vitamin A deficiency, look for someone with inadequate consumption of fruits or vegetables or a condition causing fat malabsorption. The most classic symptom is night blindness, also known as nyctalopia, due to the decreased production of rhodopsin. Other high- yield eye manifestations include keratomalacia, which is the degeneration of the cornea, and Bitot spots, which are triangular, oval, or irregular foamy spots on the conjunctiva, resulting from squamous metaplasia and buildup of keratin debris in the cornea. Deficiency of vitamin A can also affect the skin, causing dryness, itchiness, and peeling with white flakes, also known as xerosis cutis, as well as the immune system, causing an increased susceptibility to infections.

Now, for vitamin A toxicity, think of an individual with excess intake of vitamin A. This is usually in the form of supplements. But for your exams, what’s high yield is that vitamin A is also given in severe cases of measles. A vitamin A derivative, called isotretinoin, is also administered orally to treat severe acne, while another metabolite, called all-trans retinoic acid, or ATRA for short, is used in acute promyelocytic leukemia or APL. Now, symptoms vary depending on whether the toxicity is acute, meaning that it occurs over a few hours or days, or chronic, in which case it lasts for months or years. Acute toxicity typically presents with blurry vision, nausea, vomiting, and vertigo. In contrast, chronic toxicity can present with hair loss, dry or peeling skin, hepatosplenomegaly or liver and spleen enlargement, and arthralgias or joint pain. For your exams, a highly tested fact is that chronic toxicity can also cause elevated intracranial pressure. Some clues to this might be a persistent headache, cerebral edema, and papilledema, or swelling of the optic disk.

Another high- yield fact examiners want you to know is that excess vitamin A, during the first trimester of pregnancy, can be teratogenic and affect the baby. So before prescribing medications that contain a derivative of the vitamin, such as isotretinoin, make sure that there are two negative pregnancy tests and that the individual applies two contraception methods.

Alright, next up is vitamin D. Now, active vitamin D starts out as one of two metabolically inactive molecules. Either vitamin D2, which comes from plants, fungi and yeast, and vitamin D3 which can either come from fish, milk, or plants in our diet, but can also be made by our own skin cells when they are exposed to UV rays from the sunlight. Both vitamin D2 and D3 first get to the liver, where the enzyme 25-hydroxylase turns them into 25-hydroxy-vitamin D. This can then travel to the proximal tubules of the kidneys and meet the enzyme 1-alpha-hydroxylase, which turns them into 1,25-hydroxy-vitamin D. And that’s the active form of vitamin D. Now, what’s especially important to note is that activation of vitamin D can be triggered by parathyroid hormone when calcium or phosphate levels are low. More specifically, parathyroid hormone, low calcium, and low phosphate cause the renal cells in the proximal tubule to increase their synthesis of 1-alpha-hydroxylase. The effects of activated vitamin D include stimulating bone resorption at high levels and bone mineralization at low levels. Vitamin D also promotes calcium and phosphate absorption in the small intestine, as well as calcium and phosphate reabsorption in the kidneys. So, remember that active vitamin D ultimately leads to an increase in blood levels of both calcium and phosphate. Make sure you don’t confuse that with parathyroid hormone, which stimulates calcium reabsorption, while inhibiting phosphate reabsorption in the kidney, resulting in an increase in calcium, but a decrease in phosphate levels.