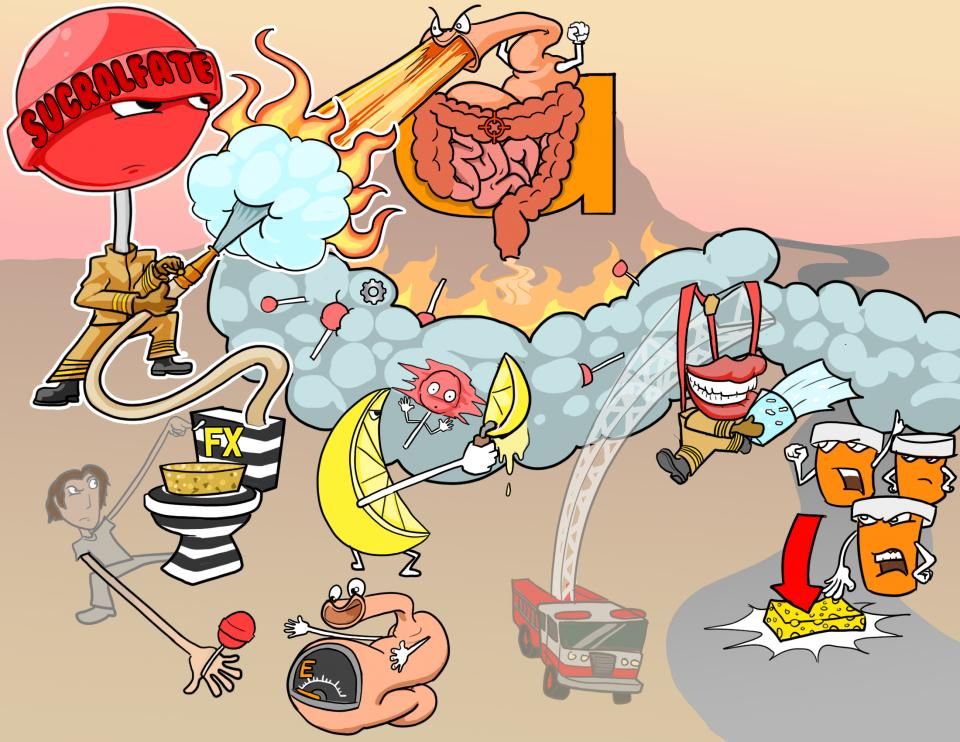 Mucosal protective agents are medications that protect the mucosal lining of the stomach from gastric acid, and are used to treat conditions like peptic ulcers, NSAID-induced ulcers, and gastroesophageal reflux disorder or GERD.

Mucosal protective agents are also used as a part of the combination treatment against the bacterium H. pylori. Now, these medications can be broadly divided into three classes; prostaglandin analogues, sucralfate, and bismuth compounds.

Starting with prostaglandin analogues, these include misoprostol, which is a synthetic analog of prostaglandin E1 that can be taken orally.

Once administered, misoprostol stimulates the production of gastric mucus, as well as bicarbonate, which helps neutralize the gastric acid.

At the same time, misoprostol acts directly on the parietal cells of the stomach to decrease their secretion of gastric acid.

Common side effects of prostaglandin analogues include stomach cramps and diarrhea. Other side effects may include diaphoresis, headaches, cardiac arrhythmias, and thrombotic events.

As a boxed warning, prostaglandin analogues are contraindicated during pregnancy, since they can induce abortion. They should also be avoided by clients of childbearing age that do not use contraception.

In addition, prostaglandin analogues must be used with caution in clients with glaucoma, cardiovascular disease, respiratory disease like asthma, and hepatic or renal disease, since they can exacerbate these conditions.

Next is sucralfate, this is taken orally. The way it works is by forming a protective barrier over the ulcer, which prevents damage by gastric acid.

Now, sucralfate contains aluminum hydroxide, which can inhibit smooth muscle contraction in the gastrointestinal tract, leading to side effects like constipation. Other side effects include headaches, dizziness, dry mouth, back pain, and hyperglycemia.

In terms of contraindications, prolonged use of sucralfate should be avoided in clients with renal disease, since aluminum may build up and even cause toxicity! Other contraindications include uncontrolled diabetes mellitus, and impaired swallowing or gag reflex.

Finally, there’s bismuth compounds, which are usually given orally in the form of bismuth subsalicylate. Much like sucralfate, bismuth forms a protective coating over the gastric lining and ulcerated tissue, and also increases the production of mucus, prostaglandins, and bicarbonate.

In addition, since it contains salicylate, it is associated with ototoxicity, which may result in hearing loss and tinnitus.

Now, if your client with an NSAID-induced gastric ulcer is prescribed a mucosal protective agent, first ask your client about the symptoms they are experiencing, including pain location, quality, duration and severity, and as well as any triggers that bring on episodes of pain.

Also ask about symptoms that accompany their pain such as nausea, bloating, or gastric reflux. Next, perform a focused gastrointestinal assessment, noting the presence of epigastric tenderness.