A 28-year-old man is brought to the emergency department for evaluation of upper gastrointestinal bleeding. The patient had spent the evening at a bar with friends and consumed 7-10 shots of liquor. Shortly after leaving the bar, he felt nauseated and vomited multiple times. The last episode of vomiting produced bright red emesis. The patient denies dyspnea or recent trauma. Past medical history is notable for asthma, for which he takes albuterol as needed. His vitals are within normal limits. Physical examination reveals a thin male in mild distress. Cardiac, pulmonary, and abdominal exams are noncontributory. The patient has no additional episodes of hematemesis. Laboratory testing reveals the following findings:

Which of the following would be most useful in providing a definitive diagnosis of the patient’s condition?
Memory Anchors and Partner Content 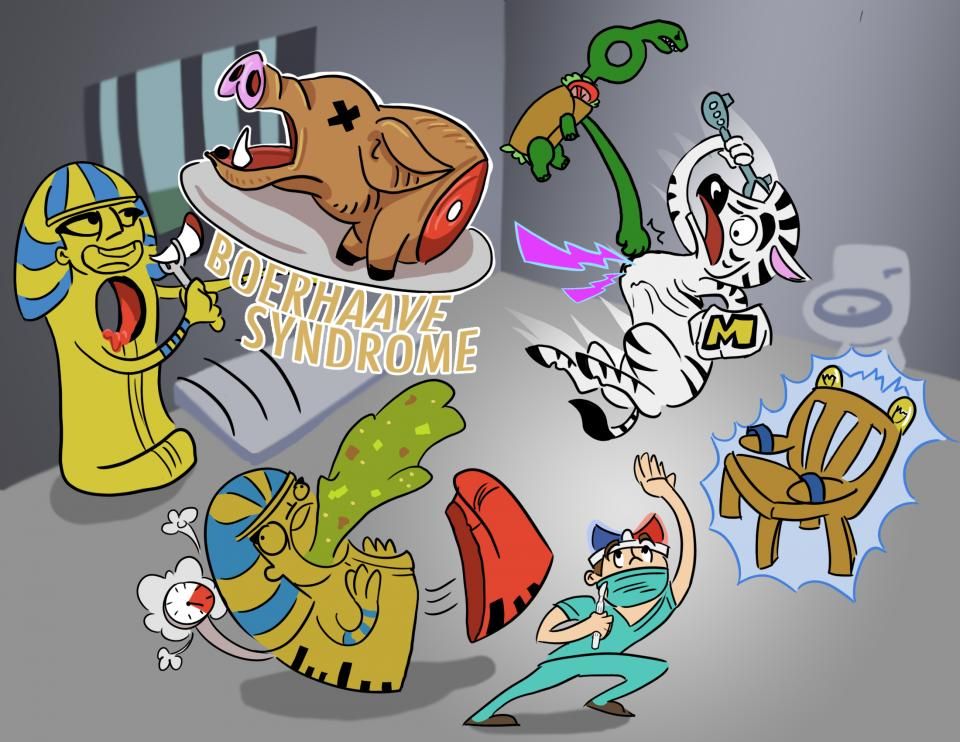 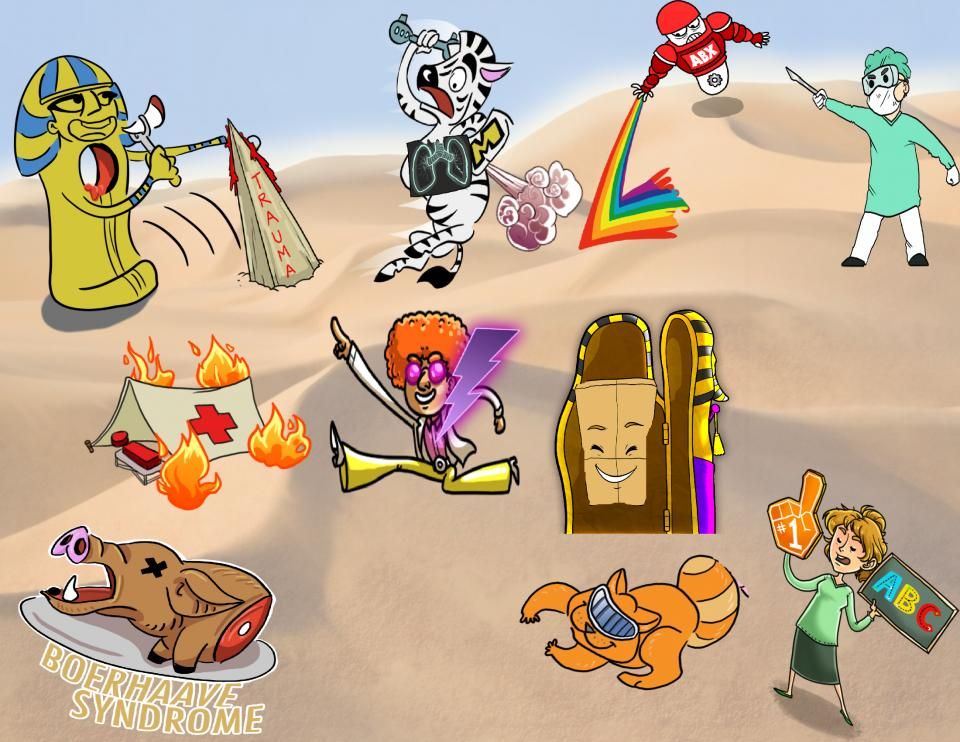 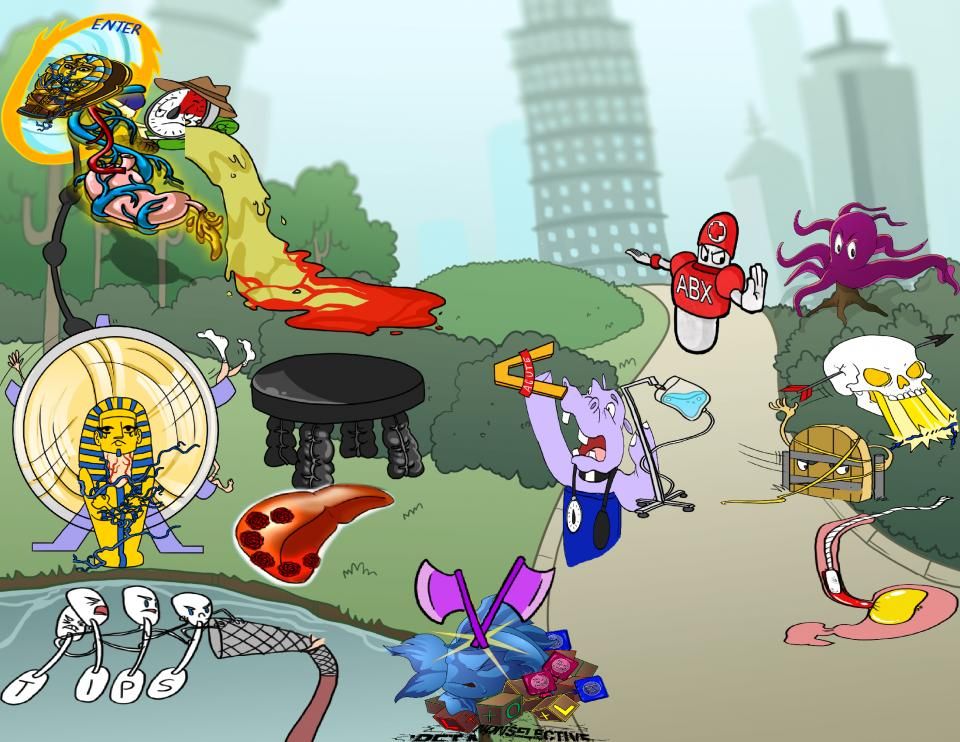 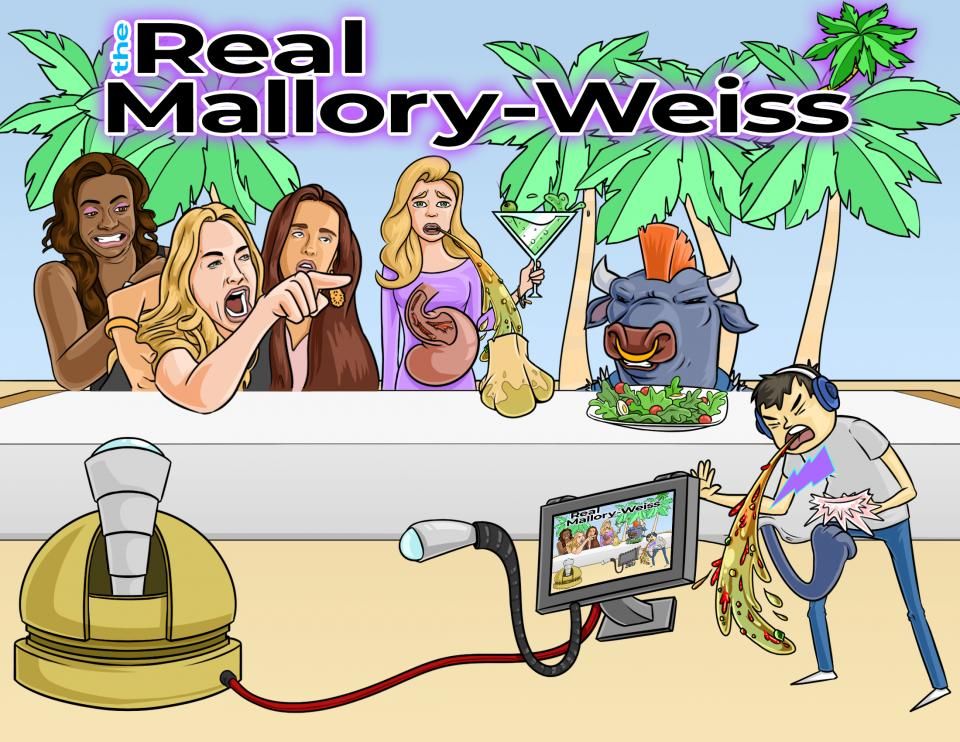 A 30-year-old male named Joseph came to the emergency department because of sharp chest pain radiating to his back. He recently graduated from medical school and has been celebrating for the past week at local bars. He says that he was drinking to the point of vomiting and blacking out. He thinks his pain began after a particularly intense night of vomiting and retching. His vital signs show no abnormalities. On the other hand, a 54-year-old lawyer called Lance has been noticing blood in his stool for the past 2 weeks. As he describes the problem, he mentions that there are “streaks of bright red blood” on top of the stool and didn’t notice any pain during bowel movements. Also, he reports a marble-sized, soft mass at the anus that can be pushed back into the anal canal. He denies abdominal pain, weight loss, or a history of colon cancer.

Now both people have gastrointestinal bleeding, but with different presentations. Gastrointestinal bleeding can be divided into upper and lower GI bleeding. Upper GI bleeding arises above the ligament of Treitz, also called the suspensory ligament of the duodenum, and it includes bleeding from the esophagus, stomach, or duodenum. Typical presentation includes hematemesis, or vomiting of blood; ‘coffee ground’ vomitus, which suggests that the blood has been oxidized by the acid in the stomach so that the iron in the blood has turned dark; and melena, which refers to black, tarry stools. On the other hand, lower GI bleeding arises below the ligament of Treitz and includes bleeding from the small intestine past the ligament of Treitz, large intestines, rectum, and anus. Typical presentation includes hematochezia, which is fresh blood passing through the anus which may or may not be mixed with stool. Now, since these individuals are losing blood, they can develop anemia, or they can even become hemodynamically unstable. In mild hypovolemia, when they lose less than 15% of the blood volume, these individuals can experience resting tachycardia. In moderate hypovolemia, when they lose from 15% to 40% of the blood volume, they can experience orthostatic hypotension; and finally, in severe hypovolemia, when they lose over 40% of the blood volume, these individuals will develop hypotension.

Okay, let’s start with upper GI bleeding! In this video, we’ll cover esophagitis, esophageal varices, esophageal perforation, Boerhaave syndrome, Mallory-Weiss syndrome, and Dieulafoy lesion. Keep in mind that gastritis, peptic ulcers, and gastric cancer can also common causes, but we will go over them in the “Gastroesophageal reflux disease, gastritis, and peptic ulcers” video. Okay, so esophageal varices are dilated submucosal veins in the lower third of the esophagus. A high yield fact for your exams is that esophageal varices are most often caused by portal hypertension, which is usually a consequence of cirrhosis, therefore, they are common in individuals who had hepatitis or are chronic alcohol users. If the varices rupture, which can occur when eating hard food, or during vomiting, they can cause life-threatening hematemesis.

Speaking of esophageal perforation, let’s also talk about Boerhaave syndrome. So, you have to know that this is a transmural, distal esophageal rupture of the esophagus caused by a sudden increase in intraesophageal pressure, like from straining or vomiting. It can be diagnosed using a chest x-ray, which can show left-sided effusion or pneumomediastinum; or by esophagram, which is used to confirm the diagnosis. As far as treatment goes, the standard of care for Boerhaave syndrome is surgery.

The next one is Mallory-Weiss syndrome, also known as gastro-esophageal laceration syndrome. Mallory-Weiss syndrome can also occur due to forceful vomiting that increases intra abdominal pressure, but instead of perforation or rupture, there’s longitudinal, partial thickness tears in the mucosa at the gastroesophageal junction. You should also remember that it can be precipitated by coughing, hiccuping, abdominal trauma, or abdominal straining. Individuals with Mallory-Weiss syndrome can be asymptomatic or they can present with painful hematemesis. In about half of the cases, this syndrome is associated with hiatal hernias, which are considered as a strong predisposing factor. It’s also associated with alcoholism and bulimia nervosa. As far as diagnosis goes, a barium swallow can show hematomas or streaks in the esophagus, but endoscopy is required to show tears in the esophageal mucosa. In most cases, Mallory-Weiss syndrome spontaneously resolves, but if there’s severe bleeding, these individuals require endoscopic techniques to obtain hemostasis.

A rarer cause of upper GI bleed is Dieulafoy lesion or exulceration simplex Dieulafoy, which is a rare condition characterized by an unusually dilated arteriole that erodes the overlying mucosa and starts bleeding. The treatment is usually a combination of epinephrine injection with thermocoagulation or hemostatic clips placement.

Now let’s move on to common causes of lower GI bleeding, in this video, we will go over intestinal angiodysplasia, intestinal ischemia, and hemorrhoids. However, remember that the most common cause is diverticulosis and the most important one to catch is colorectal cancer. You can check out our video on “Diverticular disease of the colon,” and “Colorectal polyps and cancer” videos to learn more. Inflammatory bowel disease can be a bit tricky. Crohn's disease can affect any part of the GI tract so it could present with signs and symptoms of upper and lower GI bleed, while ulcerative colitis is limited to the colon and rectum, so it always presents with signs of lower GI bleed. You can learn more about them in our “Inflammatory bowel disease” video.