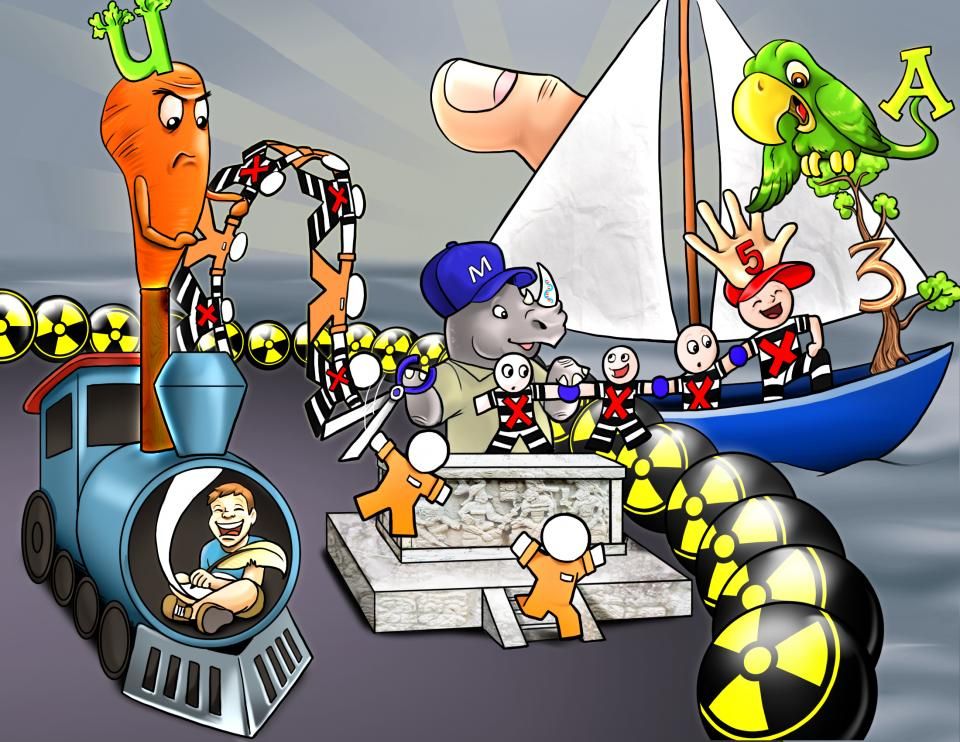 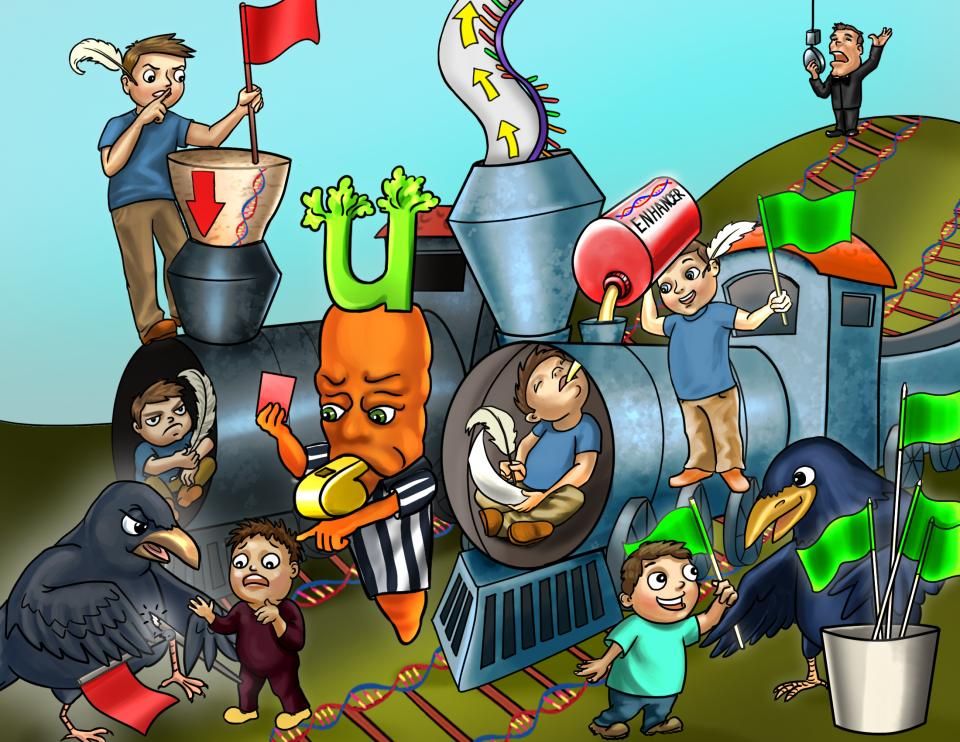 Our DNA is like a library - found in the nucleus of our cells - with thousands of books.

Some of these books - called genes - are extremely important, because they carry the recipes for every single protein found in the cell.

Some of these proteins are necessary in all the cells - like the cytoskeletal proteins.

Gene regulation is what allows the right cells to make the right proteins at the right time.

Now, on the molecular level, DNA is made up of two strands of nucleotides, so each gene is just a segment of this nucleotide sequence.

And there are four types of nucleotides: adenine, guanine, thymine, and cytosine - or A, G, T, C.

Now, the entire DNA molecule is wrapped around structural proteins called histones that package the DNA into nucleosomes - like when we roll yarn into a ball to keep it compact and organized.

Altogether, the entire yarn with the DNA plus the histones - is called chromatin.

The process of decoding the information stored in the DNA is called gene expression - and it includes transcription and translation.

Transcription is where the enzyme RNA polymerase uses the gene as a template to create a molecule that can leave the nucleus.

This molecule is called messenger RNA or mRNA and it has the same nucleotide sequence as the gene, with one tweak: it has uracil nucleotides - or U - instead of thymine.

This message is encoded so that any 3 nucleotide equate a specific codon which codes for an amino acid or is a stop codon which means that the protein is complete.

In translation, specialized proteins in the cytoplasm - called ribosomes - use the mRNA template to create a string of amino acids that make up the protein.

Transcription begins with general transcription factors binding to a unique DNA sequence – called the promoter – just upstream from a gene.

General transcription factors help unwind the DNA helix so that RNA polymerase can transcribe the gene.

However, general transcription factors can only bind to the promoter sequence if the DNA is not too tightly packed around the histones.

Usually, genes that the cell uses frequently - like the hemoglobin genes in red blood cells - are packed more loosely and therefore easier to access.

Epigenetics refers to chemical modifications that selectively activate or silence certain genes without modifying the nucleotide sequence of the gene.

These changes can occur in the histones, or to the DNA itself.

When an enzyme called histone acetylase adds an acetyl group to histones, this decreases their attraction for DNA, so the genes become more easily accessible for RNA polymerase.

On the other hand, if another enzyme called histone deacetylase removes an acetyl group, it has the opposite effect - increases the attraction between DNA and histones, so DNA wraps more tightly around histones, making the genes less accessible.

Methylation, on the other hand can both increase and decrease transcription, depending on how many methyl groups are added.

If only one methyl group is added, this decreases the attraction between the DNA and the histone, so the genes are easily accessible.

If we add two or three methyl groups to it, however, the histone will repress, or lock down, preventing the transcription of those genes.

Epigenetic changes in DNA, on the other hand, are mostly based on methylation - the addition of a methyl group, usually to a cytosine residue, prevents general transcription factors from binding to the promoter, decreasing gene expression.

As it turns out, DNA methylation also stimulates histone deacetylation - so that further inhibits transcription.

So let’s say that based on the epigenetic modifications, our gene is exposed and ready to be transcribed.

Sometimes cells need to increase or decrease transcription of a certain gene, and here’s where other types of transcription factors called activators or repressors get involved.

They bind to a DNA sequence called the enhancer, which is on the same DNA strand as the gene - sometimes it’s near the promoter, but other times it’s further upstream or downstream.

So, if the right stimulus - a ligand - reaches the cell, it gets the activator to move from the cytoplasm into the nucleus, and binds to the enhancer.

Once the activator is bound to the enhancer, it can loop the DNA around in such a way that it makes it even easier for general transcription factors and the RNA polymerase to bind to the promoter region.

On the other hand there are repressors which inhibit gene transcription through negative regulation.

Repressors bind to a DNA sequence called the silencer, which is also on the same DNA strand as the gene.

When the repressor is inactive, it’s floating freely in the cytoplasm.

But when the repressor protein is active, it moves into the nucleus, binds to the silencer sequence, and prevents RNA polymerase from binding to the promoter - thus inhibiting transcription.

The thyroid hormone receptor is an interesting example because it can act as a repressor and an activator, depending on the situation.

When there’s no thyroid hormone in the cytoplasm, the thyroid receptor behaves like a repressor.

It is bound to another protein called a co-repressor and they bind to the silencer sequence of DNA and they recruit histone deacetylases - inhibiting transcription.