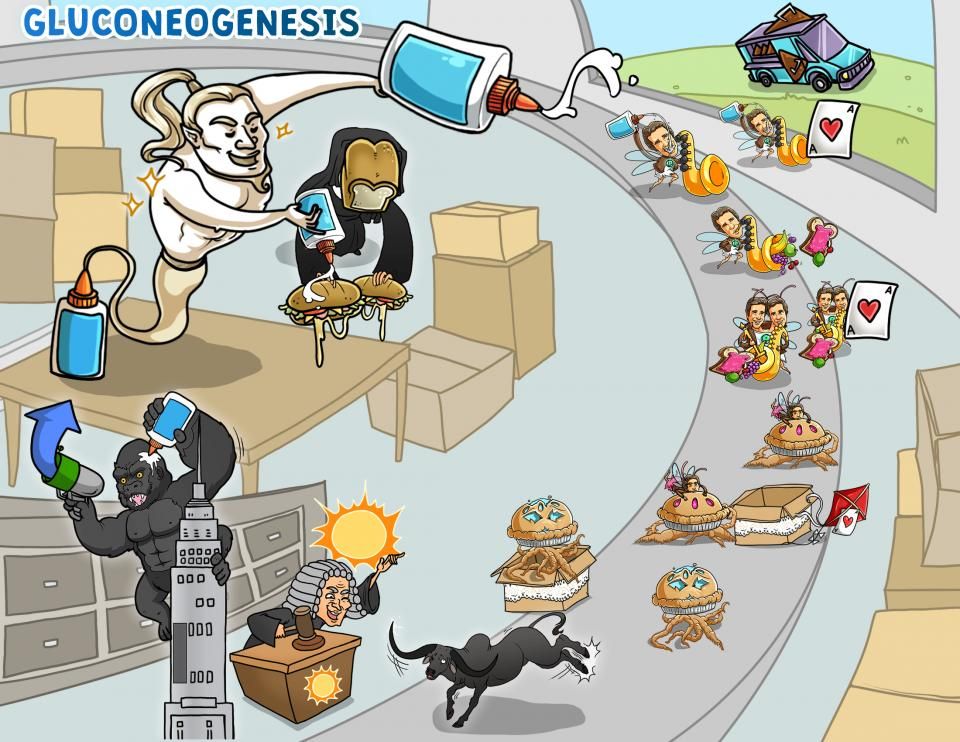 Carbohydrates are made of sugar molecules, and the most important one is the 6-carbon sugar, glucose. It’s important to keep a steady amount of glucose in the blood, because cells use it to produce energy - in the form of adenosine triphosphate, or ATP. One of the ways you can do this is by eating carbohydrate-rich foods like pasta. But in between meals, when fasting, the body maintains glucose levels using gluconeogenesis.

Gluconeogenesis is a metabolic pathway that uses enzymatic reactions to make glucose from other molecules, like amino acids, lactate, and glycerol. Gluconeogenesis primarily takes place in liver cells, but it can also happen in the epithelial cells of the kidney and the intestines. Specifically, it takes place in the cytoplasm, mitochondria, and endoplasmic reticulum of cells found in these tissues.

Okay, so let’s say you’re going hiking in the woods, and you fuel up on some pasta before you leave. Now, during the hike, you get lost and end up stranded with no food. Initially, the glucose in your pasta is broken down by a series of enzymatic reactions to make pyruvate, producing ATP in the process. This is called glycolysis, and it keeps you going for a couple of hours. Some of the extra glucose is stored in the liver cells in the form of glycogen, which is a bunch of glucose molecules stringed together. When you’re fasting, you still need glucose, in particular for your red blood cells and your brain. And you might need it to find your way out of the woods. So, it’s up to your liver to maintain adequate blood glucose levels while fasting. There are two pathways that can contribute glucose: glycogenolysis and gluconeogenesis. So with glycogenolysis, the liver breaks down glycogen into individual glucose molecules, but that only helps for 12 to 24 hours of fasting, because glycogen stores are finite. In contrast, gluconeogenesis makes glucose from scratch, so it can keep on going in the event that you fast for more than a day. Actually, by 12 hours of fasting, gluconeogenesis is the main provider of glucose in the bloodstream.

The process of gluconeogenesis is almost reverse glycolysis. In glycolysis, you’re using 10 enzymatic reactions to convert glucose to pyruvate in order to make ATP. And in gluconeogenesis, you’re working backwards and using ATP to convert pyruvate to glucose. 7 of the reactions in glycolysis and gluconeogenesis are reversible, meaning they can go in both directions using the same enzymes. However, the other 3 are irreversible, meaning that the enzyme mediating the reaction can only go in the direction of glucose to pyruvate, but not the opposite. So if you think of the path between glucose and pyruvate as a two-way road within the cell. When driving from glucose to pyruvate, it’s a smooth straightforward ride. On the other hand, when driving from pyruvate to glucose, most of the ride is straightforward, but there are 3 roadblocks which represent irreversible reactions. And for those, you have to take an alternate route to bypass them, which represent unique reactions that use different enzymes only found in gluconeogenesis.

Alright, so the ingredients we need to cook up some glucose from scratch in our liver are a source of pyruvate and ATP. In gluconeogenesis, the two main sources of pyruvate are lactate and amino acids like alanine. Lactate is produced as a byproduct of anaerobic respiration in red blood cells and exercising skeletal muscle cells. An enzyme called lactate dehydrogenase removes a hydrogen from lactate, turning it into pyruvate. In that reaction, the hydrogen goes to a nearby nicotinamide adenine dinucleotide, or NAD+, which turns into NADH.

The second source of pyruvate is amino acids, which are the building blocks of proteins. We have 20 different amino acids, and 18 of them, with the exception of leucine and lysine, are glucogenic amino acids, meaning they can be used to make glucose. You can remember the exceptions - leucine and lysine - as the “Lazy Ls” of amino acids. The body breaks down protein in skeletal muscle cells into individual amino acids, with the main amino acid being alanine. The enzyme alanine transaminase, or ALT, removes an amino group from alanine, and turns it into pyruvate. The amino group attaches to an acid called alpha ketoglutarate, which then turns into glutamate. And in general, transaminase enzymes require pyridoxine, or vitamin B6 as a cofactor.

Now, to get ATP when you’re stranded in the woods, your body starts breaking down fats which come in the form of triacylglycerides. During fasting, the pancreatic alpha cells sense blood glucose levels decreasing, and release glucagon. In the meantime, the low level of insulin, the presence of epinephrine, as well as ACTH are causing adipocytes or fat cells to stimulate hormone-sensitive lipase or HSL, an enzyme that breaks triacylglycerides down into free fatty acids and glycerol. The fatty acids enter the bloodstream and go to various tissues to be used for energy. In the hepatocyte mitochondria, free fatty acids are broken down into acetyl CoA and ATP by a metabolic process called beta oxidation. The glycerol, on the other hand, is used to make glucose in gluconeogenesis. So always remember, lactate, glycerol and all amino acids except leucine and lysine will be used to build glucose. Now let’s cook up some glucose!