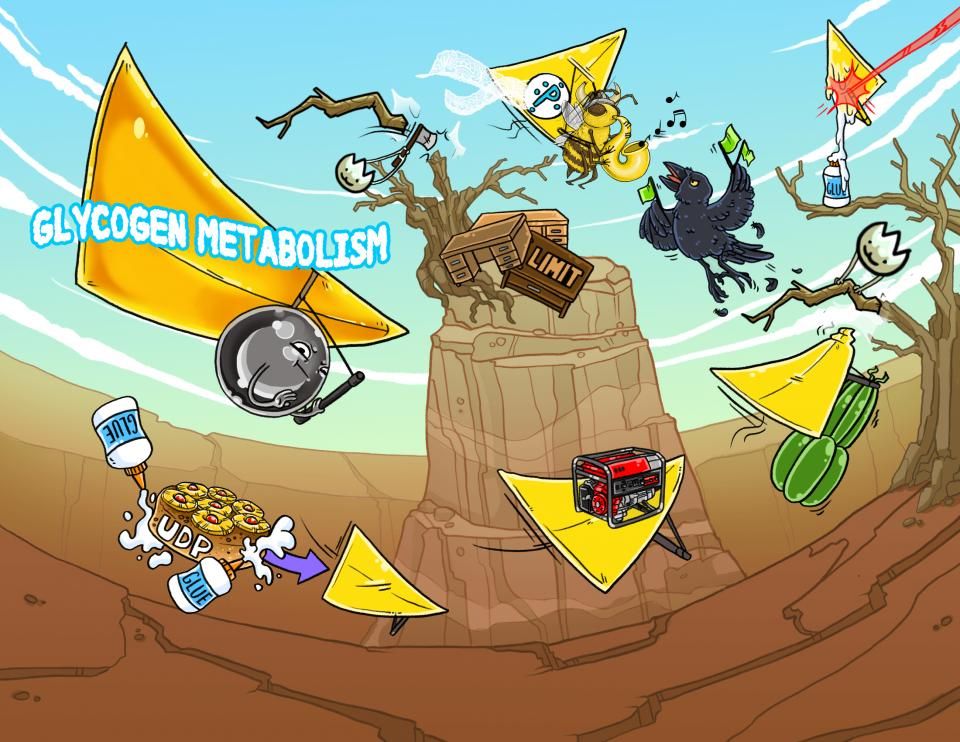 Glucose is a 6-carbon molecule that’s used to make energy, in the form of adenosine triphosphate, or ATP.

Glucose is such an important energy source, that our body stores excess glucose in skeletal muscle cells and liver cells in the form of glycogen.

You can think of glycogen having a main chain, and there being multiple branches sprouting off of it.

These branches allow glycogen to be compact and capable of rapid addition and removal of glucose.

It’s a bit like growing a plum tree in a tiny house with a short ceiling.

The short ceiling limits the tree’s vertical growth, but the tree’s able to branch off, so that it can still grow and produce many plums in a tight space.

Now let’s say that you just wrapped up a delicious lunch - you had tacos! Glucose is absorbed from the intestine and our blood sugar goes up. The pancreas responds to high blood sugar by secreting insulin.

Insulin acts on glucose transporters on the cell membrane, which are called GLUTs - and makes them bring more glucose into all the cells in our body.

Then, glucose-6-phosphate is broken down during glycolysis, making ATP as a byproduct.

Over time, ATP levels start to rise and that inhibits certain enzymes in glycolysis.

When that happens, the extra glucose-6 phosphate can be used to make glycogen. And that usually takes place in the liver and muscle cells.

There are four main steps in glycogen synthesis.

First is attaching a uridine diphosphate, or UDP molecule to glucose.

Second, is attaching the glucose part of the UDP-glucose molecule to a glycogen primer called glycogenin, forming a short linear glycogen chain, which serves as a primer.

Third, is adding more glucose molecules to that primer - a bit like forming a conga line.

And fourth, is adding branches to the glycogen molecule.

So starting with step one, to make UDP-glucose, an enzyme called phosphoglucomutase moves the phosphate from the 6th carbon of glucose-6-phosphate to the 1st carbon, creating glucose-1-phosphate.

Next, we’ll need energy - which, uniquely, comes in the form of uridine triphosphate, or UTP.

In the presence of glucose-1-phosphate and UTP, an enzyme called UDP-glucose pyrophosphorylase cuts two phosphate molecules off of UTP, which give the energy necessary to complete this reaction.

So only one phosphate remains attached to uridine, and then glucose-1-phosphate is added to it.

That makes two phosphates. So the resulting molecule is called UDP-glucose.

An enzyme called glycogen synthase catalyzes the attachment of the glucose part of UDP-glucose to another glucose residue at the end of glycogen branch, forming an alpha 1,4 glycosidic bond. It’s almost as if the glucose molecules are holding hands!

And in addition to prolonging the glycogen chain, there’s another byproduct of this reaction is UDP.

But, it turns out that glycogen synthase can only elongate an already existing glycogen chain that’s at least 4 glucose molecules long.

So, if there aren’t at least four glucose molecules linked up together already, then glycogen synthesis requires a protein called glycogenin.

Glycogenin plays the role of fooling glycogen synthase by catalyzing the attachment of 4 glucoses to itself, creating a short chain connected with alpha 1,4 glycosidic bonds.

By doing that, it’s able to tell glycogen synthase “Hey, we have a chain here that kind of looks like an old glycogen molecule”.

Glycogen synthase falls for it, and elongates this short chain on glycogenin by attaching lots of glucose molecules to it through alpha 1,4 glycosidic bonds. This elongates the chain and creates a new linear glycogen molecule.

Glucagon is a hormone that helps your body to break down glycogen (a type of sugar) in the liver to release glucose into the bloodstream. This can help to raise blood sugar levels when they are too low, like during fasting. Glucagon is produced by alpha cells of the islets of Langerhans in the pancreas.