A 22-year-old man comes to the office for the evaluation of multiple genital ulcers. Medical history is relevant for alcohol use disorder and poly-substance use. The patient is in an open relationship and typically has 3 to 4 different sexual partners within a week. Physical examination shows multiple indurated and painful ulcers over the foreskin and coronal sulcus, as well as, unilateral inguinal lymphadenopathy. His temperature is 36.5°C (97.7°F), pulse is 98/min, respirations are 14/min, and blood pressure is 120/70 mmHg. A Tzanck smear obtained  from one of the ulcers is negative, and a VDRL test is also negative. Which of the following medications would be most appropriate for this patient? 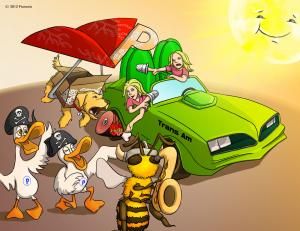