A 45-year-old man presents to the office for evaluation of a blistering skin rash. He was out in the sun with his family at a baseball game several days ago. Later that evening, he developed a severe blistering rash on the forearms, hands, neck, and legs. He has tried over-the-counter topical emollients but to little effect. The patient has had similar rashes in the past that eventually self-resolved. The first of such episodes occurred around 10-years ago. Past medical history is also significant for hyperlipidemia and chronic hepatitis C virus infection. He does not consume alcohol, tobacco, or illicit substances. Vitals are within normal limits. Physical examination reveals small ruptured blisters diffusely across the forearms, hands, neck, and lower legs.

A defect in which of the following steps of the heme biosynthesis pathway is most likely responsible for this patient’s symptoms? 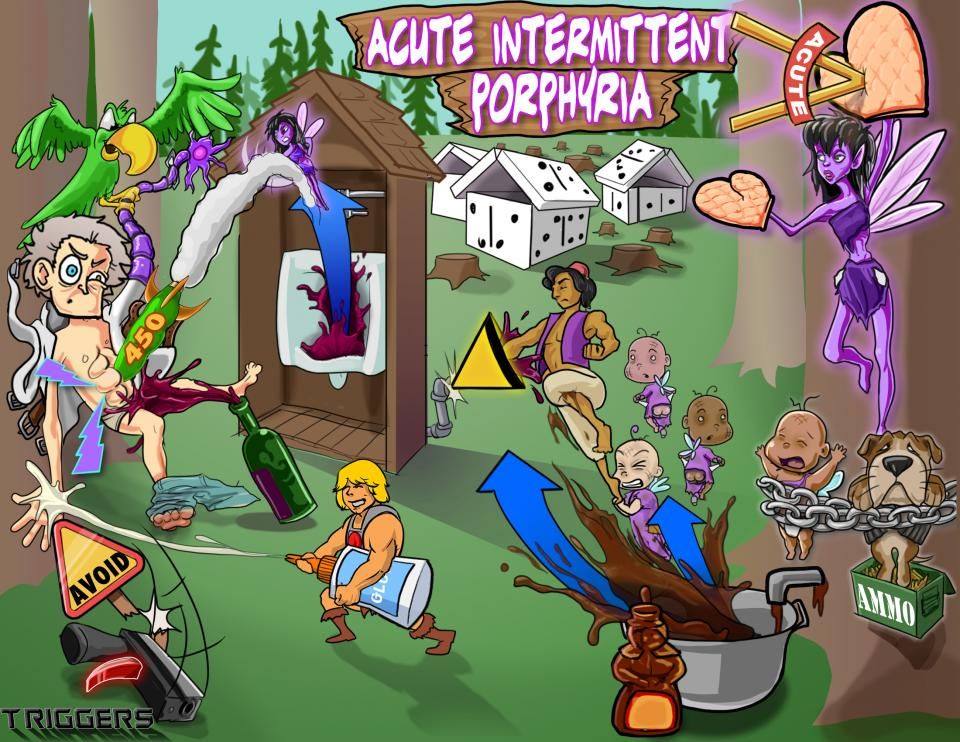 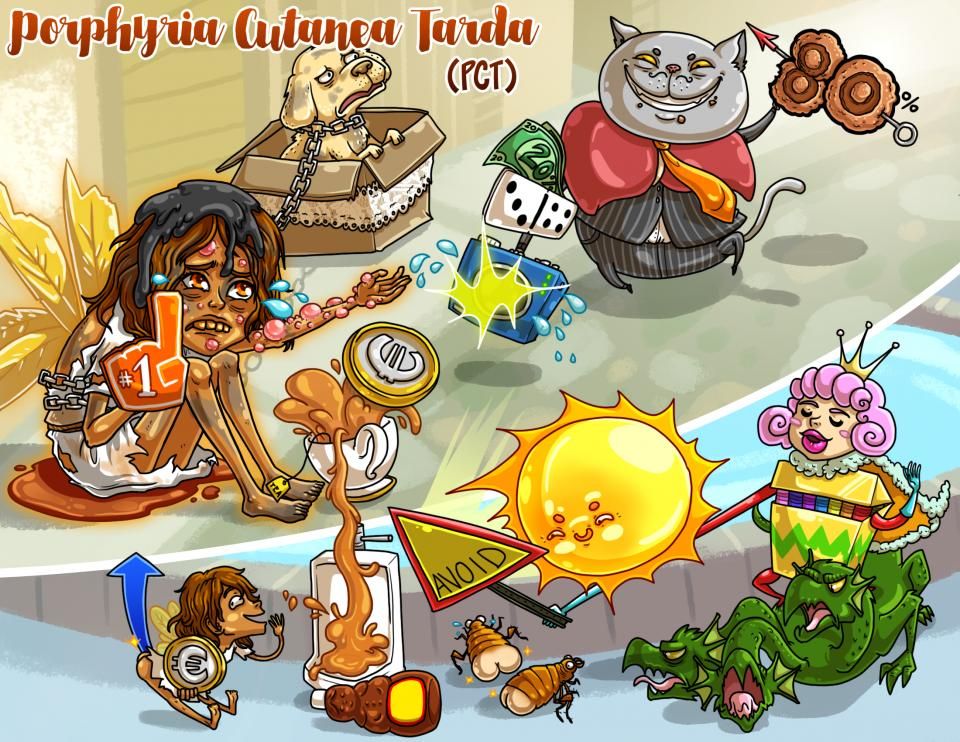 18 year old Christopher is brought to the emergency room by his best friend Paul after suddenly getting abdominal cramps at a party. Cristopher goes to the restroom while you ask Paul a few questions. Paul tells you that Cristopher was behaving strangely at the party, and adds that it was his first time drinking alcohol. When Christopher comes back from the restroom, he tells you that his urine had a reddish color. Unfortunately, his family history is unknown, since he was adopted at a very young age. Next to him, there’s 45 year old Magdalene, who developed skin blisters on her hands and forearms after spending the day having some alcoholic cocktails on the beach. Upon further questioning, Magdalene mentions that her urine had a strange tea color earlier. You decide to take a look at her past medical history, which reveals that Magdalene had hepatitis C a few weeks ago.

Based on the initial presentation, both Christopher and Magdalene seem to have some form of heme synthesis disorder. Heme synthesis disorders are associated with hereditary or acquired deficiencies of enzymes that are involved in the heme synthesis pathway. But first let’s go over the heme synthesis pathway really quick! It’s important to remember that heme synthesis occurs in the liver, where heme is used in the cytochrome P450 enzyme system, as well as in the bone marrow where heme is used to synthesize hemoglobin. Now, heme synthesis begins in the mitochondria, where succinyl CoA binds to glycine via aminolevulinic acid or ALA synthase to produce aminolevulinic acid or ALA. Remember, this is the rate-limiting step for heme synthesis, meaning that it’s the slowest step in the pathway, and it requires vitamin B6, or pyridoxine, as a cofactor. What’s also high yield is that this step is stimulated by low levels of heme, while it’s inhibited by elevated levels of heme, as well as glucose and hemin, which is an oxidized form of heme that contains ferric iron or Fe3+ with chloride. Okay, then, ALA is transported to the cytosol, where it gets converted to porphobilinogen or PBG via aminolevulinic acid or ALA dehydratase, which is a zinc-containing enzyme. From there, four molecules of porphobilinogen come together to form hydroxymethylbilane with the help of porphobilinogen deaminase. Note that porphobilinogen deaminase is sometimes called uroporphyrinogen I synthase or hydroxymethylbilane synthase, or HMBS for short. Afterwards, hydroxymethylbilane is converted via uroporphyrinogen III cosynthase to uroporphyrinogen III, which is then turned to coproporphyrinogen III via uroporphyrinogen decarboxylase Next, coproporphyrinogen III is brought back into the mitochondria and converted into protoporphyrinogen IX, which is then converted to protoporphyrin IX. Lastly, the enzyme ferrochelatase adds an iron molecule to protoporphyrin IX, and we’ve got ourselves a complete molecule of heme!

Starting with sideroblastic anemia, which can be genetic or acquired. The most common genetic cause is an X-linked mutation in the gene coding for ALA synthase. On the other hand, the most important acquired cause is vitamin B6 or pyridoxine deficiency. For your exams, remember that this can result from inadequate dietary intake, chronic alcohol abuse, and treatment with isoniazid. In any case, heme synthesis is impaired, so there’s an excess of iron that’s not being used and ends up accumulating throughout the body, particularly in the heart, liver, spleen, kidneys, and the intestines. As a result, individuals with sideroblastic anemia may develop cardiomyopathy, cirrhosis, enlarged spleen, kidney failure, and diarrhea.

Diagnosis of sideroblastic anemia relies on blood tests showing microcytic and hypochromic red blood cells, meaning that they are smaller and paler than normal, which indicates that they contain low quantities of hemoglobin. In addition, blood tests will reveal high iron and high ferritin, which stores iron, as well as a high saturation of transferrin, which is a molecule that transports iron in the blood, and normal or low total iron binding capacity or TIBC, which indicates the amount of unbound transferrin in the blood. In a peripheral blood smear, what we expect to see is red blood cells with basophilic stippling, which refers to tiny blue or purple granules of ribosomal RNA that are dispersed throughout the cytoplasm. And that’s a high yield fact! Additionally, pappenheimer bodies or cytoplasmic granules of iron may also be observed inside the red blood cells. Finally, upon a bone marrow biopsy, a Prussian blue stain can show the iron-laden mitochondria forming a ring around the nucleus, producing the classic ringed sideroblast appearance.

All right, now treatment of sideroblastic anemia involves managing iron overload with therapeutic phlebotomy or bloodletting, as well as deferoxamine, an iron chelating agent. In addition, pyridoxine supplementation can also be useful. Finally, severe cases may require a bone marrow or liver transplant.

Now, another cause of acquired sideroblastic anemia is lead poisoning. However, what’s important for you to know is that lead inhibits both ALA dehydratase and ferrochelatase. As a result, there’s build up of ALA and protoporphyrin IX in the blood. Now, remember that lead poisoning usually occurs in children ingesting lead-containing paint chips, as well as adults who inhale lead while working in mines, or those who are frequently in contact with batteries or bullets. High yield symptoms of lead poisoning include abdominal pain, headaches, memory loss, and constipation. Lead can also accumulate and form lead lines on the metaphysis of long bones. Other telltale signs include Burton lines, which are blue lead lines that can appear at the gingiva. Finally, some individuals may present with wrist and foot drop due to demyelination of peripheral nerves causing peripheral neuropathy,

Now, for diagnosis of lead poisoning, blood tests would obviously show high lead levels, in addition to the sideroblastic anemia. Finally, X-rays might also be done to look for lead lines on long bones.

The main treatment for lead poisoning consists of chelating agents like succimer for children and dimercaprol or EDTA for adults.