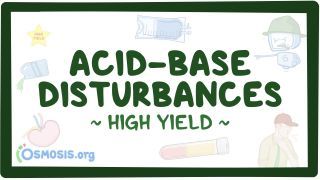 Two people came into the Emergency Department one day.

The first one is 33 year old Muriel who came in with abdominal pain, a severe headache and hyperventilation.

One of Muriel’s friends said that she caught her drinking antifreeze.

The other one is 35 year old Eustace who came in with confusion and hypoventilation.

Eustace also has duodenal ulcers, for which he has been taking antacids.

Among other tests, an ABG was done for both individuals.

Okay, based on lab results, both individuals seem to have acid-base disturbances.

Now, let’s go back to the basics for a bit.

So, in plasma you can find carbon dioxide or CO2 and water or H2O.

They are constantly mixing together in order to make bicarbonate ion or HCO3− and hydrogen ion or H+.

The blood pH which corresponds to the hydrogen ion concentration needs to stay in a very narrow range, between 7.37 and 7.42.

Basically, the more hydrogen ions, the more acidic the blood is and the lower the pH.

Less hydrogen ions means the blood is more alkaline, and the higher the pH.

So, let’s say that HCO3− levels decrease for some reason.

In this case, the equation shifts to the right and more HCO3− and H+ will be produced and as a result the blood becomes more acidic, so pH levels decrease.

On the other hand, if HCO3− levels rise, less H+ will be produced and the pH rises.

Now, if CO2 increases, then the equation shifts to the right and the pH drops.

If CO2 decreases, then the equation shifts to the left and the pH rises.

Stay with us here.

In practice, the Henderson-Hasselbalch equation is used to calculate the pH based on HCO3 and pCO2 values, where pCO2 represents the partial pressure of carbon dioxide.

In order to determine which is which, the 4 high yield parameters are: pH, pCO2, bicarbonate levels and compensatory response.

Okay, so, metabolic acidosis can happen either from the buildup of acid in our blood, which could be due to increased production or ingestion.

It can also happen because the body can’t get rid of it, or from excessive bicarbonate loss from the kidneys or gastrointestinal tract.

The main problem with all of this is that they lead to a decrease in the concentration of bicarbonate in the blood, so HCO3 levels will be low, usually less than 20mEq/L.

As a result, the pH is lower than 7.35 and as a compensatory response, there’s immediate hyperventilation in order to eliminate more CO2.

Now, with metabolic acidosis, in order to determine the cause, we need to check the anion gap. which equals sodium minus chloride plus bicarbonate.

Normally it ranges between 3 and 11 mEq/L.

The reason that it’s not 0, is that there are some unmeasured anions like organic acids and negatively charged plasma proteins, like albumin.

In this case, HCO3 − decreases when it binds to excess H+, which results in the formation of H2CO3 carbonic acid, which subsequently breaks down into CO2 and H2O.

These H+ can come from increased organic acid production in our body.

Another high yield example is diabetic ketoacidosis, which can occurs in uncontrolled diabetes mellitus, where the lack of insulin forces cells to use fats as primary energy fuel instead of glucose.

Fats are then converted to ketoacids, such as acetoacetic acid and β-hydroxybutyric acid. Another way acids can build up in our blood is due to an inability of the kidneys to excrete them. This can happen in cases of chronic renal failure in the uremic phase.

In other cases, H+ don’t come from inside our bodies at all, but, instead, they are accidentally ingested.

These include oxalic acid which can build up after an accidental ingestion of ethylene glycol, which is used in antifreeze, and formic acid, which is a metabolite of methanol, a highly toxic alcohol.

Salicylates overdose can also lead to high gap metabolic acidosis in the later phases, due to the buildup of H+ in the blood.

Finally, there are certain substances can lead to metabolic acidosis by promoting anaerobic metabolism and in turn, lactic acid production.

These are propylene glycol, iron overdose and isoniazid overdose, which you have to know for your exams.

To sum up, you can remember the causes of metabolic acidosis using the mnemonic MUDPILES, where M is for methanol, U is for uremia, D is for diabetic ketoacidosis, P is for propylene glycol, I is for iron tablets and isoniazid, L is for lactic acidosis, E is for ethylene glycol and finally, S is for salicylates.

In contrast, in normal gap metabolic acidosis, the decrease in bicarbonate HCO3− ions is offset by the buildup of Cl- ions which are part of the anion gap equation, so the anion gap remains normal.

The most common cause is severe diarrhea, where bicarbonate rich intestinal and pancreatic secretions rush through the gastrointestinal tract before they can be reabsorbed.

Another cause is type 2 renal tubular acidosis where acidosis develops because the proximal convoluted tubule is unable to reabsorb bicarbonate HCO3− so it’s lost in the urine.

Other types of renal tubular acidosis also result in normal anion gap metabolic acidosis, but the underlying mechanism is an inability to excrete protons H+ in the urine.

The excessive loss of HCO3− results a lower pH.

Another cause is Addison disease, where the adrenal glands don’t produce enough steroid hormones, including aldosterone.

Normally, aldosterone tells the kidneys to reabsorb more sodium in the distal tubule and this is linked to hydrogen ion secretion, meaning as sodium is reabsorbed, hydrogen is secreted.

Since there’s not enough aldosterone, less sodium is reabsorbed and more hydrogen will remain in the blood, leading to metabolic acidosis.

Now, in some cases, saline infusion can lead to metabolic acidosis and that’s because the standard 0.9% saline solution has a pH around 5.5.

Finally, total parenteral nutrition can lead to metabolic acidosis because it leads to the accumulation of H+.

Finally, in cases of chronic metabolic acidosis, the kidneys will try to compensate for the low HCO3- with renal ammoniagenesis.

This is when the renal tubular epithelial cells convert glutamine to glutamate and create ammonia and HCO3- as byproducts.

The HCO3- can then be reabsorbed into the blood while the ammonia is lost through urine.

To sum up, causes of normal gap acidosis can be remembered using the mnemonic HARDASS, where H stands for hyperalimentation, A for Addison disease, R for renal tubular acidosis, D for diarrhea, A for acetazolamide, S for spironolactone and the other S is for saline infusion.