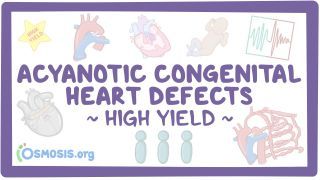 In a pediatric cardiology clinic, 4-year-old Tara is brought in by her parents because she has not been acting herself over the past month.

The mother also mentioned that she can’t keep up with the other children when playing and often gets fatigued or short of breath.

Vital signs include a temperature of 37.0 degrees Celsius or 98.6 degrees Fahrenheit, a heart rate of 100 beats per minute, a blood pressure of 110 over 70 mmHg, and a respiratory rate of 18 breaths per minute.

On examination, her skin is pink, and auscultation of the heart reveals a holosystolic murmur over the left sternal border.

Ok, so Tara has some sort of congenital heart defect.

Congenital heart diseases are defects in the embryological development of the heart or its major blood vessels.

When the defect causes blood to move from the right to the left side, it’s called a right-to-left shunt.

This is because deoxygenated blood from the right side goes to the left side, and then enters the systemic circulation.

A large amount of deoxygenated blood in the systemic circulation gives the physical appearance of cyanosis, which is a bluish discoloration of the skin.

Conversely, left-to-right shunts are called acyanotic heart defects, because there is no cyanosis. In general, individuals with acyanotic congenital heart diseases could be asymptomatic or present with signs of heart failure, such as exercise intolerance, shortness of breath, and in the case of infants and young children; poor feeding and failure to thrive.

Okay, of the acyanotic congenital heart diseases, ventricular septal defect, or VSD, is the most common.

The defect most commonly occurs in the membranous portion of the septum.

Ventricular septal defects are usually small and they often end up closing on their own. Individuals are asymptomatic at birth, and if symptoms develop, they usually occur a couple of weeks later or even later in life.

This is a helpful clue on exams.

On auscultation, a systolic murmur can be heard along the left sternal border.

Bear in mind though that the smaller the defect, the more audible the murmur.

That’s because when blood rushes through a more narrow opening, it produces more turbulence and therefore, more noise.

In addition, because the defect allows oxygenated blood to move from the left to the right side of the heart, the oxygen saturation will be higher than normal in the right ventricle and the pulmonary artery.

Okay, now let’s move up the heart and look at atrial septal defects, or ASD.

Remember that an atrial septal defect is different from a patent foramen ovale.

Normally, when the heart is first developing, a strip of tissue called the septum primum between the left and right atria grows downward, slowly creating two separate chambers by closing a gap or opening known as ostium primum.

The septum primum then fuses with the endocardial cushion and closes the gap completely.

Meanwhile, a hole appears in the upper area, called the ostium secundum.

Now, we also have the septum secundum which grows downward, just to the right of the septum primum, and covers the ostium secundum, leaving a small opening called the foramen ovale, which allows blood to go from the right atrium to the left atrium.

At birth, the septum secundum and septum primum slap shut, and then fuse and close off the foramen ovale.

However, for your exams, it’s important to know that the foramen ovale remains patent in approximately 25% of normal adults.

A high yield fact is that the most common atrial septal defect is a problem with the formation of the septum secundum, and it’s specifically called an ostium secundum defect.

A high yield association of ostium primum defects is with Down syndrome, or Trisomy 21.

On auscultation, the most characteristic feature of an atrial septal defect is the fixed split S2.

That’s because during inspiration, there’s negative pressure in the chest to bring in air.

This can be heard as a physiologic splitting of the S2 during inspiration where the pulmonary valve closes a bit later than the aortic valve.

Now, with an atrial septal defect, there’s extra blood that gets shunted from the left atrium to the right atrium and right ventricle, which passes by the pulmonic valve and causes a delay in the closure of the pulmonic valve relative to the aortic valve closure, producing a split S2.

But since the atria communicate via the defect, inspiration produces no net pressure difference between them, and has no effect on the splitting of S2.

So, S2 is fixed, meaning that it’s split to the same degree during inspiration and expiration.

Now, similar to ventricular septal defects, the oxygen saturation will be increased in the right ventricle and pulmonary artery.

Saturation will also be increased in the right atrium and this is what distinguishes atrial from ventricular septal defects.

An important complication of both a patent foramen ovale and an atrial septal defect is the development of paradoxical emboli from the venous circulation.

This may lead to the development of a stroke once the embolus travels up the carotid arteries and gets lodged somewhere, and this is specifically called a cryptogenic stroke.

Alright, now we go even higher up in the heart to look at patent ductus arteriosus, or PDA.

Now in utero, the ductus arteriosus is the normal communication between the pulmonary artery and the aorta.

The structure serves to shunt blood to the baby’s systemic circulation from the pulmonary artery to the aorta, so from right to left.

This is important because the fetus’ lungs aren’t working yet and blood doesn’t really go there.

This is all normal and it’s maintained by high levels of the vasodilator, prostaglandin E2, which is produced by the placenta and the ductus arteriosus.

At birth, a bunch of things change.

First, oxygen levels in the blood go up dramatically and the lungs become the main source of oxygenated blood.

Soon after birth, the foramen ovale closes and prostaglandin E2 levels fall, causing the ductus arteriosus to close off and eventually become the ligamentum arteriosum.

If it fails to close, it’s called a PDA.

This might happen if for any reason oxygen tension is low.

For example, if a baby is born prematurely, their lungs haven’t fully developed yet, and so they can’t maintain normal levels of oxygen in the blood and the ductus fails to close.

Okay, now in a PDA, blood moves from the aorta to the pulmonary artery, so left to right.

This happens because the pulmonary vascular resistance decreases after birth, switching the direction of this shunt.

So, all that oxygenated blood is going back to the lungs instead of to the systemic circulation.

Now, for your test, keep in mind that in 90% of cases, PDAs occur as isolated defects, but in the remaining 10%, they are associated with other congenital heart defects.

In fact, in certain cyanotic congenital heart defects, where the right ventricular outflow is obstructed like in Tetralogy of Fallot, or where the aorta and pulmonary artery swap locations, like in transposition of great vessels, PDA is necessary for survival.

That’s because it forms a connection between the aorta and pulmonary artery that allows mixing of oxygenated and deoxygenated blood during fetal development.