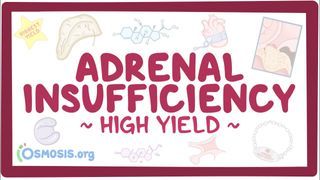 While doing your rounds, you see two individuals.

First is Mike, a 50-year-old immigrant from Canada who comes in with a 5-month history of progressive fatigue, weight loss, and muscle pain.

Personal history is unremarkable but there’s a family history of autoimmune disease.

Then you see Teresa, a 25-year-old who presents acute vomiting, abdominal pain, and fever.

She was accompanied by her mother, who mentions Teresea recently underwent transsphenoidal resection of a pituitary tumor.

Both people have adrenal insufficiency although their symptoms are very different.

There are actually three types of adrenal insufficiency.

First, primary adrenal insufficiency is when there’s a problem with the adrenal glands themselves.

As a result, both cortisol and aldosterone production is deficient.

It can be acute, usually due to a massive adrenal hemorrhage, or chronic, in which case it is called Addison disease.

Now, a high yield concept to remember is that the most common cause for Addison in high income countries is autoimmune mediated damage to the adrenal glands.

In the rest of the world, the most common cause is infection, especially from tuberculosis, but it can also be due to HIV or disseminated fungal infections.

Finally, bilateral adrenal metastases of cancer from somewhere else in the body,can also cause chronic adrenal insufficiency.

Then, there’s central adrenal insufficiency which can be secondary or tertiary.

In secondary adrenal insufficiency, the problem is not with the adrenal glands but with the pituitary, which secretes insufficient ACTH.

And since ACTH only regulates cortisol production, in this case there’s cortisol deficiency, but aldosterone levels are normal.

This can happen with panhypopituitarism, when the entire pituitary gland is affected, and all the hormones secreted by it are deficient.

Panhypopituitarism can be a result of any condition that affects the entire pituitary, like trauma, and pituitary tumors or large central nervous system tumors in its vicinity.

And finally, there’s tertiary adrenal insufficiency, where the problem originates with the hypothalamus and there’s insufficient CRH secretion.

So once again, because there’s no CRH to stimulate the pituitary to release ACTH, the adrenal glands won’t produce cortisol.

And because CRH doesn’t influence its production, aldosterone levels are normal.

Similar to secondary adrenal insufficiency, this can happen because of head trauma or intracranial tumors.

Now, when it comes to symptoms, adrenal insufficiency can be acute or chronic.

The acute presentation is high-yield and is called adrenal crisis.

This typically occurs when the body is under stress, like when the person is ill or just undergone surgery, and the adrenal glands can’t meet the increased demand for cortisol.

The chronic presentation is more insidious.

Some symptoms are nonspecific, like fatigue, anorexia and weight loss, weakness, abdominal pain, and muscle and joint pain.

Sometimes, these can go unnoticed, because the body can partially compensate for low levels of cortisol and aldosterone.

Sometimes, people with Addison disease can present with adrenal crisis from when they are under stress.

Moving on, there are some symptoms specific to each type of insufficiency as well.

In primary adrenal insufficiency, you need to know that there’s hyperpigmentation, especially around the oral mucosa, palmar creases, and knuckles.

Hyperpigmentation is caused by increased production of melanin due to a surge in melanocyte-stimulating hormone or MSH levels.

This is because MSH is a byproduct of increased ACTH production since both have a common precursor called proopiomelanocortin.

There can also be salt craving if aldosterone is deficient.

The main result of volume contraction is hypotension.

Another major function of aldosterone is to increase urinary potassium secretion, and without it, the kidneys won’t be able to get rid of excess potassium, which causes hyperkalemia and, subsequently, metabolic acidosis.

Now, in secondary and tertiary adrenal insufficiency, because there’s no ACTH excess and aldosterone levels are normal, individuals won’t present with hyperpigmentation or hyperkalemia.

However, they might have symptoms pertaining to the underlying cause insufficiency, such as headaches, visual abnormalities like bitemporal hemianopia, and features of hypopituitarism in those with pituitary tumors.

Others might have a history of prolonged glucocorticoid treatment.

Next, an ACTH-stimulation test can help confirm the diagnosis when the morning cortisol level is inconclusive, and it can also help differentiate between primary and central disease.

In this test, the individual is given Cosyntropin, which is a synthetic analog of ACTH, and serum cortisol levels are measured before and after the analogue is given.

Low cortisol levels before and after Cosyntropin administration confirm primary adrenal insufficiency because adrenal pathology prevents the release of cortisol.

In contrast, if cortisol levels rise following Cosyntropin administration, that means the adrenals are responding properly to ACTH or its analogue, confirming central adrenal deficiency, meaning the issue is either with the pituitary or the hypothalamus.

Now, if this test is also inconclusive, a Metyrapone stimulation test can be performed.

Metyrapone is a drug that blocks the conversion of a precursor called 11-deoxycortisol to cortisol, and the test is based upon the principle that decreasing serum cortisol concentrations will result in an increase in ACTH if the pituitary and hypothalamus are normal.

So, if after the test ACTH levels are high but 11-deoxycortisol levels are decreased, that confirms primary adrenal insufficiency.

If both ACTH and 11-deoxycortisol are decreased, that is suggestive of secondary or tertiary adrenal insufficiency.

Next, if we suspect primary insufficiency, then serum aldosterone and plasma renin activity should also be obtained.

That’s where an individual is given a CRH injection, and ACTH is measured before and after.

No rise in serum ACTH compared to the basal value points towards a pituitary, or secondary, cause, and if serum ACTH increases, then the hypothalamus is to blame, so it’s tertiary adrenal insufficiency.

Mineralocorticoids like fludrocortisone should also be added, in cases of primary adrenal insufficiency with decreased aldosterone.

Individuals should also be advised to wear a bracelet that mentions they have adrenal insufficiency in case of adrenal crisis.

For this dangerous condition, treatment should be initiated as soon as the diagnosis is confirmed.

In an emergency setting where an individual has severe hypotension, intravenous fluids and IV hydrocortisone, a synthetic corticosteroid, should be administered immediately.

Now that we’ve covered the basics of adrenal insufficiency, let’s talk about some specific causes.

So starting with primary adrenal insufficiency, or Addison disease, if the cause is autoimmune in nature, it’s called autoimmune adrenalitis.

This can occur on its own, or it can be a part of two inherited polyglandular autoimmune syndromes that affect different endocrine glands.

Polyglandular autoimmune syndrome Type I is associated with Addison disease, hypoparathyroidism, and chronic mucocutaneous candidiasis, most commonly affecting the mouth, skin, and nails.

These individuals often have primary hypogonadism where the gonads are also damaged by autoantibodies.

In addition, hypogonadism and type I diabetes mellitus may also be present.

When it comes to Addison disease caused by an infection or malignancy, diagnosis is based on a workup which should include a chest X-ray and a tuberculin skin test to look for evidence of tuberculosis, and, if confirmed, anti tuberculosis medications can be given to treat the infection.

Screening for HIV infection can be done with PCR or with antibody-antigen tests.

If an HIV infection is the confirmed cause, antiretroviral therapy should be initiated.

Finally, a CT scan can also identify adrenal metastases, which most frequently come from lung, breast, stomach and colon cancer, or lymphoma.

In these cases, treatment with hydrocortisone and fludrocortisone should also be initiated before surgery or chemo and radiotherapy.

Another rare cause of primary adrenal insufficiency is adrenoleukodystrophy, which is an inherited disease that predominantly affects young males.

The condition is an X-linked recessive disorder.

The defect is actually a mutation in the ABCD1 gene, and it interferes with fatty acid beta oxidation.

As a result, very long chain fatty acids accumulate in various tissues, and they particularly affect the white matter of the brain, the adrenal cortex, and testes.