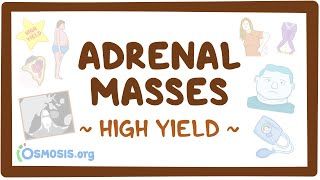 While doing your rounds, you see two individuals.

First is Jessica, who comes in with lumbar pain, anuria, and constipation.

Examination is unremarkable and she doesn’t have any history of kidney disease.

The other person is 38-year-old Dan, who is obese and has an abnormally round face.

He is also hypertensive and hyperglycemic.

Dan is not taking any medications but he’s complaining of severe lumbar pain on the left side.

Abdominal CT scans were obtained for both.

In Jessica’s case, imaging detected a mass in the right adrenal cortex.

In Dan’s case, CT detected a mass in the left adrenal cortex.

Ok, so both seem to have some type of adrenal masses.

But first, a little bit of physiology.

Each adrenal gland has two main components: the cortex and the medulla.

For your exam, something high-yield to keep in mind is that the cortex is composed of 3 zones.

The zona fasciculata, the middle zone, contains foamy-looking cells in columns that are responsible for the production of glucocorticoids, predominantly cortisol, which increases blood sugar levels via gluconeogenesis, suppresses the immune system, and aids in metabolism.

And the innermost zone is the zona reticularis, which has basophilic cells arranged in anastomosing cords that produce gonadocorticoids, especially androgens like dehydroepiandrosterone or DHEA.

The medulla is composed of special cells called chromaffin cells.

These are modified postganglionic sympathetic neurons that originate from the neural crest.

Normally, when a fetus is in its 5th week of development, special cells called neural crest cells start migrating along the midline of the embryo.

In the thoracic region, neural crest cells differentiate into the neurons of the sympathetic chain on either side of the developing spinal cord.

In the lumbar region, neural crest cells differentiate into the cells of the adrenal medulla.

Chromaffin cells are also responsible for the pulsatile production of catecholamines like epinephrine, also known as adrenaline; norepinephrine, or noradrenaline; and small amounts of dopamine.

These hormones prepare the body for the fight-or-flight response by increasing the heart and respiratory rate, constricting blood vessels, increasing the metabolic rate, and heightening cognitive awareness.

Ok, so, adrenal masses and tumors can emerge from any cell of the adrenal cortex or medulla that over proliferates.

Now, when it comes to non-functional adrenal tumors, the ones in the cortex are typically benign and most are adenomas.

The ones in the medulla however, are more likely to be carcinomas.

One of the main risk factors for adrenal carcinomas is mutations in the TP53 gene, which codes for a tumor suppressor protein.

Those with a mutated TP53 gene are at risk of developing Li Fraumeni syndrome, which is an autosomal dominant disorder that involves multiple malignancies at an early age.

The syndrome is also known as SBLA syndrome, which is an acronym given by the malignancies it is associated with: sarcoma, breast cancer, leukaemia, and adrenal gland carcinoma.

Additionally, adrenal carcinomas may not be primary, meaning they metastasized from elsewhere in the body.

These most often come from the lungs, kidney, colon, lymphomas and skin melanomas.

Because non-functional tumors don’t secrete any hormones, the symptoms they cause mostly depend on their size and the organs they compress.

Many individuals are initially asymptomatic, however, if the tumor involves both glands from the beginning, which is a rare occurrence, it can lead to adrenal insufficiency.

Symptoms of adrenal insufficiency can include weight loss, muscle weakness, fatigue, low blood pressure, and darkening of the skin. In time, as the tumor grows, it can start pressing on the nearby structures.

These can consist of lumbar pain when the tumor presses on nearby spinal nerves, anuria, or non passage of urine, when it compresses on the ureters, and even constipation if the tumor is large enough to block a part of the intestine.

One very high yield complication is rupture of a highly vascularized tumor, which can lead to adrenal hemorrhage.

The major signs of adrenal hemorrhage are abdominal pain, falling hematocrit, and signs of an adrenal crisis, including hyponatremia, fever, hypoglycemia, and loss of consciousness.

Additionally, malignant tumors can also cause symptoms like persistent abdominal or flank pain, hematuria, as well as general symptoms like weight loss and anorexia.

Adrenal carcinoma can also metastasize to the liver, lungs, lymph nodes, the 3 L’s, as well as the bones, which means individuals might also present symptoms related to the affected organ.

Diagnosis of non-functional tumors begins with a CT scan, which can provide some clues regarding the benign vs. malignant nature of the tumor, like the size of the mass, its shape and borders.

In some cases, a biopsy should also be performed, especially if imaging cannot characterize the mass as benign and if pheochromocytoma is excluded.

Biopsy is also recommended if there’s suspicion that the tumors are actually metastases from other sites in the body.

If metastases are suspected, CT imaging of the chest and liver, as well as a bone scan should be done to find the primary tumor.

Treatment of benign non-functional tumors depends on the size.

A smaller tumor can be monitored regularly by CT or MRI.

A large or potentially malignant tumor should be removed via laparoscopic adrenalectomy.

Chemotherapy and radiation therapy are used as needed.

Starting with the outermost zone of the adrenal cortex, the zona glomerulosa , you need to know that tumors that secrete aldosterone usually originate from this zone and these tumors are usually benign.

Remember that aldosterone release is increased whenever there’s a drop in blood pressure or sodium levels.

This hormone increases the activity of the sodium/potassium ATPase ion pump on the surface of the cells that line the distal tubules and collecting ducts of the kidney.

The result is increased sodium and water reabsorption and increased potassium and hydrogen excretion through urine.

When there’s a tumor that secretes too much aldosterone, we get Conn syndrome or primary aldosteronism.

The high levels of aldosterone will lead to hypokalemia, hypernatremia, and metabolic alkalosis.

In addition, more water is reabsorbed by the kidneys along with the sodium, so there’s also an increase in plasma volume, leading to hypertension.

As a result, the main symptom of primary aldosteronism is treatment-resistant hypertension.

Now, it might be helpful to know that because hyperaldosteronism also causes potassium loss, the affected individuals might come in with symptoms of hypokalemia muscular aches and weakness, muscle spasms, numbness, and heart palpitations.

Something else that might help you is that Conn syndrome does not usually cause edema because of something called an aldosterone escape mechanism.

The mechanism is actually unknown but it is believed that in these individuals, the surge in blood volume stimulates the atria of the heart to release high levels of atrial natriuretic peptide which leads to compensatory diuresis and “escape” from edema and severe hypernatremia.

This is in contrast with secondary hyperaldosteronism like in heart failure, where the aldosterone escape mechanism is impaired, and edema does occur.

Serum sodium can be mildly elevated or normal due to the aldosterone escape mechanism.

Once primary aldosteronism is confirmed, an abdominal CT or MRI scan is needed to confirm and locate the aldosterone-producing tumor.

Some cases may be treated by removing the tumor with surgery.

In case of bilateral tumors, treatment is typically with aldosterone antagonists such as spironolactone or eplerenone.

Other medications for high blood pressure, hypokalemia, and a low salt diet may also be needed, especially before surgery.

Next, the tumors that secrete cortisol typically originate in the cells of the zona fasciculata.

These are more often adenomas, but in rarer cases, carcinomas can also secrete cortisol.

Now, Cushing syndrome can be caused by anything that leads to excess cortisol, not only by adrenal tumors.

A high yield fact to keep in mind is that the majority of cases actually occur in individuals using exogenous cortisol, like prednisone, over a long period of time, often as a treatment for autoimmune and inflammatory conditions, like rheumatoid arthritis or poorly controlled asthma.

Whatever the cause, high cortisol levels trigger the negative feedback in the hypothalamus, which suppresses corticotropin-releasing hormone or CRH production.

This suppresses adrenocorticotropic hormone or ACTH production by the pituitary.

Normally, at this point, with nothing to simulate them, the adrenal glands would stop producing cortisol.

However, tumors secreting cortisol are not regulated by ACTH, so they keep pumping out cortisol independently.

In contrast, with no stimulation from ACTH, the normal tissue in the zona fasciculata of the uninvolved adrenal gland shrinks and atrophies.

The symptoms of Cushing syndrome are directly related to the effects of excess cortisol on its various target tissues.

The bones are also broken down so fractures can occur due to osteoporosis.

Next, there’s elevated blood glucose level due to increased gluconeogenesis in the liver.

As a result, insulin level goes up, and eventually insulin resistance develops.

Cortisol also increases appetite which can lead to weight gain, which can manifest as truncal obesity.

But there’s also fat redistribution to the cheeks, resulting in a round, moon-shaped face, and to the back of the neck causing buffalo hump.

That’s because cortisol can amplify the effect of catecholamines on blood vessels.

Cortisol is also a weak agonist for mineralocorticoid receptors, so it can increase blood pressure by causing the kidneys to retain more fluid and sodium.

Remember for your exam that this is called pseudohyperaldosteronism.

High levels of cortisol also inhibits the secretion of gonadotropin-releasing hormone from the hypothalamus, which messes up normal ovarian and testicular function.

In females, this leads to amenorrhea or absent menstruation.