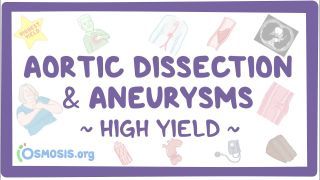 Ronda is a 55 year old with a history of hypertension, diabetes and coronary artery disease who came to the emergency department with a 1 hour history of sudden chest pain that’s described as “something’s tearing inside my chest!”

She says this pain is different from the occasional chest pain she gets when she exercises.

She was given nitroglycerin in the ER but the pain did not improve.

Her troponin levels are normal.

After seeing this x-ray, a CT of the chest was performed, and this is what it looked like.

Okay, so the aorta is subject to a lot of stress, so a lot can go wrong.

First let’s look at aortic aneurysms which is an outpouching that occurs due to weakening of the aortic wall.

A dissection occurs when there is a tear in the tunica intima, allowing blood to literally “dissect” into the vessel wall.

This may create the appearance of an aneurysm, but because it doesn’t involve all three layers, it’s a false, or pseudoaneurysm.

Now, that we got the basic terminology down, let’s take a closer look at aortic aneurysms.

The most high yield and most important risk factor for abdominal aortic aneurysms is atherosclerosis.

In atherosclerosis, chronic inflammation results in the release of enzymes called matrix metalloproteinases, or MMPs, which degrade the extracellular matrix in the tunica media, weakening the aortic wall.

Abdominal aortic aneurysms, or AAAs, are most common below the origin of the renal arteries, which corresponds to the L2 vertebral level.

This is because below this level, the abdominal aorta lacks “vasa vasorum”, which sounds like a graduation title, but are in fact small blood vessels in the adventitial layer that provide nutrients to the aorta itself.

Therefore, the absence of vasa vasorum in this part of the aorta makes the tunica media particularly susceptible to ischemia.

That’s because in atherosclerosis, thickening of the intima makes it harder for oxygen to diffuse to the tunica media.

Now, abdominal aortic aneurysm is usually asymptomatic, but sometimes a pulsatile abdominal mass may be detected on physical exam.

The most worrisome complication of AAA is rupture, which is more likely to occur when the aortic diameter exceeds 5 centimeters.

It presents with a triad of sudden-onset lower back or flank pain, hypotension from blood loss, and a pulsatile abdominal mass.

Your exams will often not give you all three, because in real life it’s rare for the entire triads to appear.

Other complications include formation of a thrombus, which could embolize to distal sites like the limbs or the renal arteries.

Thoracic aortic aneurysms are less common, and they’re not caused by atherosclerosis. Rather, they’re associated with cystic medial degeneration.

Also, a high yield fact is that tertiary syphilis can cause a small-vessel vasculitis in the vasa vasorum of the thoracic aorta, also called obliterative endarteritis, which could also lead to aneurysms. Now a thoracic aortic aneurysm involving the ascending aorta can dilate the area where the aortic valve opening is, impairing the valve’s ability to close during diastole. Therefore, you can sometimes hear an aortic regurgitation murmur.