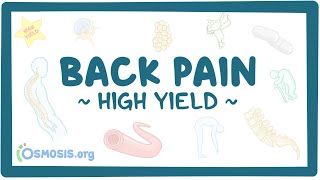 Transcript for High Yield: Back pain

At the urgent care clinic, three people came in with lower back pain.

The first is Jeff, a 26-year-old, who says his pain began 5 hours ago after trying to lift a 300-pound weight off of the floor at his local gym.

He describes the pain as sharp and severe and says the pain goes down the back of his right leg and into his foot.

Second is Beth, a 68-year-old, who says she slipped and fell while walking in her kitchen yesterday.

Her history includes a wrist fracture from a little over a year ago.

Finally, we have Harry, a 71-year-old male, who says his back pain has progressively worsened over the past month, keeping him up at night.

Back pain is a very common complaint and one for which there are many potential causes.

It can originate from the spinal cord, nerve roots, the vertebral column, the surrounding muscles, and ligaments, or even extra-spinal structures, such as abdominal organs.

The vast majority of cases of back pain are considered non-specific musculoskeletal pain due to strained muscles or ligaments.

These individuals have no sensory or motor deficits, and they typically complain about tenderness over the affected muscle or ligament.

The treatment for these individuals is prescribing activity as tolerated and NSAIDs for pain management.

The next one is spinal osteoarthritis, which can be due to the natural aging process where the cartilage at the tips of bones wear down over their lifetime.

Next we have disk herniation.

Now, the spine is made up of bony vertebrae separated by intervertebral disks that act like cushions to absorb shock.

This is most often caused by an individual doing some heavy lifting, and while any disk in the spine can herniate, a high yield fact to know is that it is almost always one of two disks in the lumbosacral region that herniates, the L4-L5 disk or the L5-S1 disk.

But, on rare occasions, the disk between L3-L4 vertebrae can also herniate.

Regardless of the disc that herniates, the nerve that is affected is typically below the level of herniation.

A key symptom for L4-5 and S1-3 disc herniations is sciatica, or a shocking pain that shoots down from the buttocks through the leg, following the course of the sciatic nerve.

In L4 radiculopathy, where the disk between L3-L4 herniates, there’s also motor deficits like weakness in knee extension and reduced patellar reflex.

On the other hand, if the L4-L5 disk herniates, it can result in L5 radiculopathy.

The motor deficits include weakened hip abduction and foot dorsiflexion.

Another high yield point that you have to know for your exam is that individuals with L4 or L5 radiculopathy have difficulty in heel walking!

Finally, if the L5-S1 disk herniates, it can lead to S1 radiculopathy.

Finally, remember that individuals with S1 radiculopathy have difficulty in toe walking.

A common test used in diagnosing lumbar disk herniation is the straight leg raise test, or SLR, where a person laying on their back keeps their legs straight and then raise them one at a time between 30 and 60 degrees.

If they experience pain radiating down their leg, the test is considered positive, suggesting lumbar disk herniation.

An MRI of the spine can confirm the diagnosis.

First-line treatment for disk herniation is usually conservative and involves rest with activity as tolerated, and NSAIDs to manage pain.

If that fails to manage pain, corticosteroids may be used. If symptoms persist or worsen beyond 6 weeks, treatment may involve surgical removal of part, or all of the disk.

Now, it’s important to note that herniated disk can compress spinal roots below the L2 and cause cauda equina syndrome!

Besides disc herniation, trauma and tumors can also cause this syndrome, which is characterized by back pain, radiculopathy, loss of bladder and sphincter control, and sexual dysfunction.

For your exam, you have to know that cauda equina syndrome is associated with saddle anesthesia, which is a loss of sensation in the areas that touch the saddle when you ride a horse.

This includes the buttocks, inner surface of the thigh and perineum.

Also, one or both legs can be impaired by muscle weakness, loss of knee and ankle reflexes, and even paraplegia.

In addition, they can receive high doses of steroids to relieve the pain and reduce edema, while waiting for the surgical intervention.

Next is spinal stenosis, which refers to the narrowing of the spinal canal or intervertebral foramen, through which the spinal cord and spinal nerves pass, respectively.

Natural wear and tear or degeneration of the spine over time is the most common cause of spinal stenosis.

Over time, osteophytes, or bone spurs, can form, and the ligamentum flavum can also grow excessively.

All of these factors contribute to narrowing the spinal canal and intervertebral foramen, increasing joint stress, causing pain.

Since the causative factors develop over time, it is typically found in individuals over the age of 60.

The high yield hallmark feature of spinal stenosis is neurogenic claudication, which refers to the pain being exacerbated by walking or standing upright and relieved by sitting or bending forward.

Pain relief when bending forward is often referred to as the “shopping cart sign” because individuals typically bend forward when pushing a shopping carts and this offers symptom relief.

Key symptoms include back pain which is usually the chief complaint.

There could also be neurologic symptoms such as lower extremity numbness, tingling, or weakness if the stenosis results in compression of the spinal cord or nerve roots.

Just like with disc herniation, sciatica can also be present if nerve roots in the lumbar and sacral regions are compressed.

Diagnosis typically involves a suggestive history, followed by a neurological exam and an MRI to confirm the diagnosis.

Treatment is mostly conservative, involving physical therapy and pain management with NSAIDs or epidural steroid injections in some cases.

In rare cases where spinal stenosis leads to compression of the spinal cord or spinal nerves producing neurologic deficits, such as those in cauda equina syndrome, decompression surgery may be required.

Next up are vertebral fractures, which are usually caused by major trauma that can lead to spinal cord lesion and eventual neural deficit.

But, for your exam you have to know that vertebral fractures can also be asymptomatic, and in that case you should think of compression fractures.

A compression fracture is a subtype of vertebral fractures that is most commonly seen in individuals with osteoporosis.

This is because individuals with osteoporosis, typically older, post-menopausal women, have bones that are less dense, making them more susceptible to fractures.

In the spine, the body of each vertebra losing density over time decreases their ability to withstand pressure that may occur even with normal movement, such as bending over, and fractures can develop.