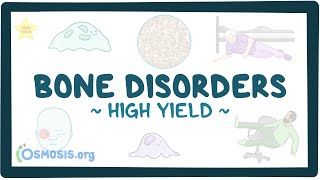 While on your rounds, you see two individuals.

First up is Jenna, a 70-year-old female who presents with left hip pain after falling while getting out of bed.

She sustained a fracture of the right hip, and preoperative chest x-ray reveals that she had pre-existing asymptomatic vertebral fractures before her fall.

She denies any other symptoms and physical examination was otherwise normal.

Then you see Gerald, a 46-year-old male who presents with a mild but noticeable limp and hip pain on the right side after falling from a chair.

In Jenna’s case, a DEXA scan was performed, revealing a T -2.8 score.

Both seem to have some type of bone disorder.

Now, these are replaced every few years in a process called bone remodeling.

Osteoid seam is mainly made up of collagen and it acts like a scaffold upon which hydroxyapatite, a combination of calcium and phosphate, deposits.

This causes the osteoclasts to stop demineralizing the bone, and osteoblasts to secrete osteoid seam.

Another high-yield concept is that osteoblasts are derived from mesenchymal stem cells in the periosteum, a membrane covering the surfaces of bones and consisting of an outer fibrous layer and an inner cellular layer.

By contrast, osteoclasts originate from hematopoietic progenitor cells, more specifically from a fusion of monocyte and macrophage precursors.

These differentiate once osteoblasts secrete RANK-L and macrophage colony-stimulating factor or M-CSF, which interact with their respective receptors on the osteoclast membrane.

Now, keep in mind that parathyroid hormone also regulates osteoclast maturation, but it does so indirectly, by stimulating RANK-L and M-CSF secretion from osteoblasts.

Ok, now let’s talk about bone disorders, starting with osteoporosis where there’s an increased breakdown of bone mass in comparison to the formation of new bone, which results in porous and weak bones.

Factors that accelerate mass loss and increase the risk of osteoporosis are low estrogen levels, as in menopause, and hypocalcemia.

However, something high-yield to know is that the most important factor that influences bone mass is genetics, which explains why some individuals develop osteoporosis earlier than others.

Genetics is also the reason why Caucasians have lower bone densities than those of African descent.

Additional risk factors include low weight, alcohol consumption, smoking, drugs like corticosteroids, which can decrease calcium absorption from the gut through antagonism of vitamin D, and medications like heparin, L-thyroxine, and anticonvulsants.

Physical inactivity can also lead to osteoporosis because it causes bone deposition to decrease due to a lack of stimulation, while resorption increases.

In postmenopausal osteoporosis, decreased estrogen levels lead to to increased cycles of remodeling and bone resorption.

With senile osteoporosis, it’s believed that osteoblasts just gradually lose the ability to form bone, while the osteoclasts keep doing their thing unabated.

In both cases, bone resorption usually overtakes bone formation despite normal bone mineralization and lab values for serum calcium and phosphate, causing both cortical and spongy bone loss, as well as widening of the Haversian canals, which are the canals through which blood vessels and nerves travel throughout the bone.

The result is porous bones that have an increased risk of fractures.

In osteoporosis, most fractures are fragility or pathologic fractures because they typically occur after minimal trauma, like falling from a chair.

People with osteoporosis don’t usually have symptoms until a fracture occurs, usually vertebral fractures, which are also known as compression fractures.

These cause back pain, height loss, and a hunched posture.

Colles’ fractures, which is a type of fracture of the distal forearm, femoral neck fractures, and hip fractures can also occur, and they’re often associated with postmenopausal osteoporosis, and can cause limping and localized pain.

Osteoporosis is usually diagnosed with a dual-energy X-ray absorptiometry or DEXA scan, which tests for bone density.

The test compares the individual's total lumbar spine, hip, and femoral neck bone density to that of the average score of people of similar age, which yields the result, or the T score.

A T score less than or equal to -2.5 standard deviations is diagnostic of osteoporosis.

A score between -1.0 and -2.5 means the individual has low bone density, or osteopenia.

Moving on, diagnosis can also be established by a fragility fracture at the hip or vertebra in the absence of other metabolic bone disorders.

One time screening by DEXA scan is recommended in all females 65 years old and above and in younger females with risk factors.

And a high yield fact to remember! lab values like calcium and phosphate are typically normal in osteoporosis.

Treatment for osteoporosis is high-yield and it relies on bisphosphonate drugs like alendronate and risedronate.

These are pyrophosphate analogs, an important component of hydroxyapatite, which help bind hydroxyapatite in bone and inhibit osteoclast activity.

Bisphosphonates have poor gastrointestinal absorption, so it needs to be taken while fasting.

Side effects can include jaw osteonecrosis, atypical femoral stress fractures, and, if taken orally, they can cause pill-induced esophagitis, which is why people are advised to take with water and remain upright for 30 minutes after ingesting them.

Bisphosphonates should also be used with precaution in individuals with renal failure as they are excreted unchanged in the urine.

Next, if osteoporosis is really advanced, teriparatide, a recombinant parathyroid hormone, can be used.

Some of its side effects include transient hypercalcemia and an increased risk of osteosarcoma, which is why they should be avoided in people with Paget disease of the bone, unexplained elevation of alkaline phosphatase, and in those with a history of cancer or radiation therapy.

Thiazide diuretics like hydrochlorothiazide can be used to treat osteoporosis, especially in those with associated congestive heart failure.

As a downside, it can cause hypokalemic metabolic alkalosis and hyponatremia.

Additionally, it can also cause hyperGlycemia, hyperLipidemia, hyperUricemia, and hyperCalcemia - all of which can be remembered using the mnemonic HyperGLUC.

Finally, other medications that are commonly tested include denosumab, which is a monoclonal antibody against RANKL that inhibits osteoclasts maturation, and raloxifene, which is a selective estrogen receptor modulator that mimicks natural estrogen, both of which be used for postmenopausal osteoporosis.

Although raloxifene has agonist effects in the bone, it acts as an estrogen antagonist in the breast and uterus, which means it can actually decrease the risk of estrogen-positive breast cancer.

In rare cases, calcitonin is also used to treat osteoporosis, which works by decreasing bone resorption of calcium.

Prophylaxis in those with risk factors include weight-bearing exercise and adequate calcium and vitamin D intake throughout adulthood.

Hormone replacement therapy with estrogen might also be beneficial.

But, because hormone replacement therapy increases the risk of endometrial cancer and of cardiovascular disease, some women might benefit from adding progesterone or progestin to the treatment.

Another thing that you might come across is that hormone replacement therapy, just like pregnancy and oral contraceptives, can increase thyroid binding globulin or TBG levels.

TBG is the protein through which thyroid hormones circulate in plasma so its increased levels also leads to increased total T4 and T3 levels.

Next, osteopetrosis, which means “stone bone,” is a rare genetic disorder that makes bones abnormally dense due to a decrease in bone resorption.

The condition is associated with mutations in at least nine genes, like the one for carbonic anhydrase II, which impairs the ability of osteoclast to generate the acidic environment necessary for bone resorption.

Without functional osteoclasts, old bone is not broken down as new bone is formed.

As a result, bones throughout the skeleton become unusually dense and structurally abnormal, making them prone to fractures.

Symptoms of osteopetrosis depend on the severity of the disease.

And depending on which genes are affected, there are three types of disease that can occur: osteopetrosis tarda, the adult form which is benign and asymptomatic; osteopetrosis congenita, and marble bone disease, the infantile forms, both of which are severe.

Osteopetrosis congenita is associated with failure to thrive and growth delay.

When skull bone tissue grows excessively, it can narrow the cranial foramina, an opening on the skull base through which many cranial nerves pass, and cause symptoms like proptosis, which is protrusion of the eyeball; blindness; deafness; and hydrocephalus, which is cerebrospinal fluid accumulation within the brain ventricles.

When bone tissue begins to replace bone marrow in the medullary cavity, it can cause severe bone marrow failure, resulting in pancytopenia.

Consequently, people with severe osteopetrosis are at risk of abnormal bleeding due to thrombocytopenia, anemia, and recurrent infections caused by withe blood cell depletion.

Now, the body tries to compensate for bone marrow failure by stimulating extramedullary hematopoiesis in the liver and spleen, resulting in hepatosplenomegaly and hypersplenism.

Unfortunately, it can’t really keep up with body demands, and, as a result, these individuals die due to severe anemia, bleeding, and infections.

Marble bone disease is not characterized by bone marrow failure, but there can be renal tubular acidosis because carbonic anhydrase II is also involved in many kidney functions.

Additionally, the affected individuals might have a short stature and present with intracranial calcifications, hearing loss, dental abnormalities, seizures, and psychomotor impairment.

Diagnosis is established by X-ray, which most often detect abnormally dense bones and narrowed medullary cavity.

Some specific signs that can appear include diffuse symmetric sclerosis causing the classic “bone-in-bone” appearance of the vertebrae and phalanges, where there’s an even radiopaque area surrounded by a trim of radiolucent tissue; and sclerosis of skull base, pelvis and vertebral end plates, giving rise to “sandwich” vertebrae where the superior and inferior margins of the vertebrae are opaque and the middle radiolucent.