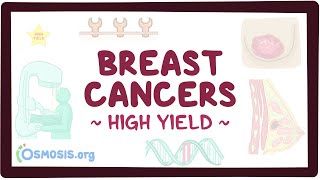 64-year-old Cassie comes to the office because of a new breast mass that she found on her monthly self-examination.

A mammogram shows microcalcification clusters so an excisional biopsy is performed.

Pathology shows high-grade cells with central necrosis in the lumen and dystrophic calcification in the center of the ducts without invasion of the basement membrane.

Later that day, a 58-year-old named Linda comes to the physician's office with eczematous dermatitis of the left nipple and areolar area for the past 24 months.

Her history reveals that the lesion has been treated unsuccessfully with topical steroids and has progressively distorted the nipple, resulting in nipple inversion.

At first glance, you’d think Cassie and Linda have nothing in common, but the fact is, they have different forms of breast cancer!

Breast cancer is the most common malignancy in women and it’s typically seen in postmenopausal women, over 50 years of age.

Most breast cancers are adenocarcinomas and they typically arise from the terminal duct lobular units.

Breast cancer can present as a palpable hard mass, most commonly located in the upper outer quadrant of the breast.

Now, some breast cancers can be associated with amplification and overexpression of genes for estrogen receptors, progesterone receptors, and HER2/neu receptors.

For your exam, you have to remember that these receptors are important therapeutic and prognostic factors of breast cancer.

In other words, breast cancers that are associated with overexpression of estrogen and progesterone receptors are more susceptible to anti-estrogen medications, such as tamoxifen.

On the other hand, HER2/neu receptors, also known as erbB2 receptors, are coded by the ERB-B2 gene.

These receptors are transmembrane glycoproteins with tyrosine kinase activity that plays an important role in epithelial growth and differentiation.

HER2/neu receptors are present in small amounts in normal breast and ovarian cells; while they are overexpressed in 25-30% of breast cancers as well as in adenocarcinomas of the ovary, lung, stomach, and salivary glands.

Moreover, breast cancers that are associated with HER2/neu positivity are linked to more aggressive tumors; however, they are more likely to respond to anti-HER-2 monoclonal antibodies, like trastuzumab.

Another high-yield fact is that breast cancers that are estrogen negative, progesterone negative, and HER2/neu negative, or in other words, triple-negative, are linked to a more aggressive form of breast cancer.

Finally, breast cancer tends to metastasize first to the axillary lymph nodes, while in the later stages, the most common sites of metastases include lungs, liver, and bones.

Now, switching gears and moving on to risk factors!

The most common risk factors in females include advanced age and family history of breast cancer, which is considered the strongest risk factor.

The risk of hereditary breast cancer is increased even more in young women who have had more than one close relative with premenopausal breast cancer.

Also, a family history of ovarian cancer is linked to an increased risk for ovarian and breast cancer, because both of these cancers are associated with autosomal dominant mutations of BRCA1 and BRCA2 genes. BRCA genes codes for BRCA proteins that acts as a tumor suppressor that controls the cell cycle, helps repair DNA, and regulates transcription of DNA.

Other risk factors include alcohol consumption, absence of breastfeeding, and obesity in postmenopausal women.

Remember that after menopause, estrogen levels typically drop, but adipose tissue converts androstenedione to estrone, which is a weak estrogen.

Finally, you shouldn’t forget the influence of race in breast cancer:

Caucasians are at the highest risk while people of African descent are at increased risk for the development of triple-negative breast cancer.

In terms of screening and diagnosis, according to the American Cancer Society guidelines, women aged 45-54 years should also undergo screening mammography every year.

If a breast mass is palpated during physical exam, a woman should undergo mammography which is the initial imaging technique used for palpable breast lesions in women older than 35 years.

Clinicians can also use needle biopsy to evaluate suspicious breast lesion since this is the most specific diagnostic tool.

As far as the treatment goes, breast cancer is treated with surgery, radiation therapy, and systemic therapy.

Chemotherapy agents include trastuzumab, a monoclonal antibody against HER-2/neu receptors and tamoxifen, which is a selective estrogen receptor modulator.

Now, remember that at the time when they are found, they have not crossed the basement membrane and invaded other tissue.

Ductal carcinoma in situ, or DCIS, is a precancerous lesion characterized by a mass of neoplastic cells that arise from epithelial cells in the terminal duct lobular unit.

As they proliferate, neoplastic cells fill the lumen of the duct, but at the same time, they do not invade into the basement membrane, which is why they are “in situ”.

In most cases, DCIS affects only one ductal system; but in some individuals, it can present as a more extensive lesion that spread to surrounding breast tissue.

Now there are two subtypes of ductal carcinoma in situ: comedo DCIS and non-comedo DCIS.

Comedo DCIS, also referred to as comedocarcinoma, is associated with solid sheets of pleomorphic, high-grade malignant cells, which indicate that this cancer is growing rapidly.

Moreover, central malignant cells can die and result in central necrosis, which can eventually calcify and form dystrophic calcifications.

Additional findings can include chronic inflammation and periductal concentric fibrosis.

So for your exam, you have to remember that comedocarcinoma typically does not produce a mass lesion unless it has invaded the surrounding breast tissue; instead, it’s most commonly identified as microcalcification clusters on mammography.

In contrast to comedo DCIS, non-comedo DCIS is not associated with central necrosis and it’s subdivided into three types: papillary and micropapillary DCIS, which are characterized by malignant cells that are arranged in a finger-like pattern within the duct; cribriform DCIS, which is characterized by gaps between malignant cells; and solid DCIS, where cancer cells completely fill the duct.

The next non-invasive breast malignant condition is Paget disease of the breast!

Paget disease occurs when ductal carcinoma, either in situ or invasive, extends up to the lactiferous ducts and into the nipple and areola.

So, you have to know that women with this condition typically present with an eczematous skin lesion or persistent dermatitis in the nipple and adjacent areas.

The diagnosis of Paget disease of the breast is established by obtaining a biopsy, but women with Paget disease must undergo mammography to detect the presence of underlying breast cancer.