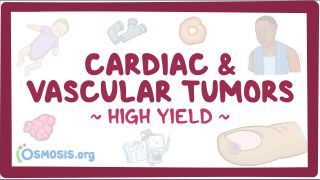 Two people came to the clinic one day.

Kara is a 66 year old woman who came to the clinic after noticing gradually developing left arm swelling and redness over the past 3 months.

She has a history of hypertension, diabetes, and breast cancer that was treated 10 years ago with a modified radical mastectomy and radiation therapy.

Klay is a healthy 1 year old infant brought by his parents due to a rapidly growing “red bump” on his face.

He has no history of trauma, and the lesion didn’t appear elsewhere.

Physical examination reveals a raised, bright red nodule on the left side of his face and no other abnormal findings.

Now, both Kara and Klay have vascular tumors.

There are many types so it’s best to classify them into benign and malignant tumors.

Starting with the most common benign vascular tumor in children; the strawberry hemangioma, where Hemangioma means a benign tumor of the blood vessels.

A strawberry hemangioma appears as a superficial, bright red skin lesion that looks kind of like a strawberry, and they commonly affects the face.

Histologically, these lesions are confined to the epidermis.

Now a typical strawberry hemangioma develops in infancy and grows pretty fast, but fortunately, it goes away on its own by 5 to 10 years of age.

So in terms of management, exams like to bring up a very concerned parent, but the correct answer will almost always be to reassure the parent that the lesion will regress without treatment.

Now, a related disorder is cherry hemangioma, which is the most common benign vascular tumor in adults.

Histologically, this lesion extends to the superficial papillary dermis, so they reach much deeper than strawberry hemangiomas.

These tumors increases in frequency with age, and unlike strawberry hemangiomas, they do not regress spontaneously.

Cavernous hemangiomas are soft, bluish lesions, and unlike strawberry and cherry hemangiomas, these are usually seated in the deep dermis.

The word “cavernous” means cavern-like. So it’s not surprising that histologically, these appear as large, endothelium-lined spaces filled with red blood cells.

Cavernous hemangiomas can also be located in organs like the liver, spleen or even the brain.

Also, Von-Hippel Lindau syndrome is an autosomal dominant condition that causes numerous tumors and cysts throughout the body, one of these being cavernous hemangiomas of the cerebellum and retina.

Look for a history of bilateral pheochromocytoma or renal cell carcinoma.

The next tumor is cystic hygroma, or a cavernous lymphangioma.

It’s a benign tumor of the lymphatic vessels that typically arises in the neck, and is associated with both Down and Turner syndrome.

Histologically, this tumor is made of an endothelial lining, but the difference between it and hemangiomas is the absence of red blood cells, because lymphatic vessels have lymphatic fluid in them, not blood

Next up we have pyogenic granuloma, which is the biggest misnomer in medicine.

First, it does not produce pus, and histologically, it’s not a granuloma.

Instead, this is a benign, polypoid or dome-shaped hemangioma that can ulcerate and bleed.

Histologically, the tumor shows lobules made of proliferating capillary and edema, which makes it look like granulation tissue.

Board exams will often give you risk factors, such as a history of trauma to the area, or pregnancy, especially in the first trimester.

Next are glomus tumors.

These arise in the glomus bodies which are small arteriovenous shunts located in the dermis.

They help regulate body temperature by shunting blood away from the skin in cold temperatures, and to the skin when it’s hot.

A glomus tumor usually arise from the smooth muscle cells in the glomus bodies and they are painful, bluish-reddish tumors most commonly found under the fingernails.

An important differential diagnosis is subungual melanoma, which appears similarly, but the difference is the presence of melanin-pigmented cells on histology.

So it’s important to get a biopsy!

Kaposi sarcoma on the other hand is a malignancy of the endothelial and smooth muscle cells caused by human herpesvirus 8, or HHV-8, or by HIV.

It’s still unknown exactly how these viruses cause malignancy. Now, both conditions appear as red-violet papules on the skin.

Kaposi sarcoma also tend to affect the buccal mucosa as well as the gastrointestinal and respiratory tracts.

So beware for questions that pose Kaposi sarcoma as a case of GI bleeding or hemoptysis.