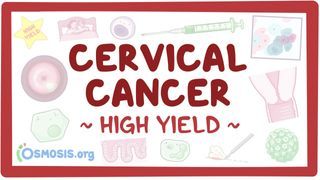 At the gynecology clinic, 28-year-old Luciana comes in because she was told that her Pap smear showed abnormal cervical cells.

She is totally asymptomatic and her previous pap smear from 3 years ago was normal.

Next, there is 36-year-old Cassie who presents to the office after noticing vaginal bleeding after sexual intercourse.

She admits she has never done a pap test in her life. Pelvic exam shows a friable mass growing on the cervix.

On further history, both have been sexually active with multiple sexual partners and use oral contraceptive pills as their method of contraception.

Both Luciana and Cassie have different types of cervical pathologies.

The cervical canal can be divided into two sections.

The endocervix is closer to the uterus, and is lined by columnar epithelial cells.

The ectocervix is continuous with the vagina and it’s lined by mature squamous epithelial cells.

For your exams, it’s necessary to remember that, right where the two types of cells meet, there’s the transformation zone, which is where cells multiply and transform into immature squamous epithelium through a process called metaplasia.

Now, metaplasia is when a stimulus, usually a stressor, causes the stem cells in a region to differentiate into another type of cells that replaces the typical cell type in that region.

For example with Barrett’s esophagus, chronic stomach acid irritation causes the normal stratified squamous cells that line the esophagus to get replaced by simple columnar cells.

This is different from dysplasia where fully differentiated cells turn into immature cells that have varying shape and nuclear morphology.

Metaplasia is usually reversible if the stressor is removed while only mild or moderate dysplasia is reversible.

So, in the cervix, right at the basal layer of the transformation zone is where dysplasia might start.

This is also known as cervical intraepithelial neoplasia or squamous epithelial lesion.

In most cases, cervical intraepithelial neoplasia is linked to HPV infection, particularly high-risk strains, like HPV 16, 18, 31 and 33.

Don’t confuse these with low-risk strains, like HPV 6 and 11, which are responsible for warts.

They especially prefer immature squamous cells, so areas under constant friction or irritation with high cell turnover, like the vocal cords or the anus, is especially vulnerable.

In the cervix, the virus inserts itself into the immature squamous cells of the transformation zone and then integrates its DNA into the host DNA.

An important fact to know is what sets low- and high-risk HPV strains apart.

And that is the ability of the high-risk ones to make huge amounts of two proteins, E6 and E7, using the host DNA.

These proteins are responsible for pushing mature squamous cells through the cell replication cycle by blocking the action of tumor suppressor genes.

Since HPV is a sexually transmitted infection, a high yield fact to remember is that the number one risk factor for it: is having multiple sexual partners and not using condoms.

These are immature squamous cells with dense irregularly staining cytoplasm and perinuclear clearing, resembling a halo.

And these cells pile up in the cervical epithelium, starting from the basal layer and moving upwards.

So, depending on how much of the epithelium is involved, thickness-wise, cervical epithelial neoplasia is divided into grades.

These are mostly squamous cell carcinomas.

The second most common type, also associated with HPV, is cervical adenocarcinoma, which involves the epithelial gland cells of the cervix.

But either way, what you need to remember is that CIN classically progresses in a stepwise fashion, meaning from CIN I to CIN II to CIN III to CIS and, eventually, to invasive carcinoma.