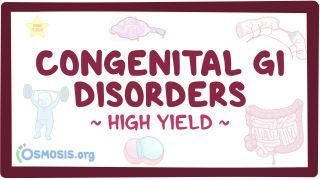 A newborn infant boy from Syria, named Ahmad, gets transferred to the neonatal intensive care unit due to an opening in the abdominal wall.

On examination, there’s a sac protruding from the center of the abdomen, with visible bowel loops.

He was born to a 28 year old mother, who received no prenatal care.

Next, a 5 week old Caucasian boy named Nathaniel is brought to the clinic with bouts of projectile vomiting after every meal.

On examination, an olive- shaped mass is palpated in the right upper abdominal quadrant.

The baby also has sunken eyes and frontal fontanelle, and poor skin turgor.

Both children have congenital gastrointestinal disorders.

Normally, during the fourth week of fetal development, the embryo starts to change from a flat, three-layer disc to something more shaped like a cylinder, a process called embryonic folding.

In the horizontal plane, the two lateral folds eventually come together and close off at the midline, except for at the umbilicus, where the umbilical cord connects the fetus to the placenta.

If those lateral folds don’t close all the way, an opening is left in the abdominal wall, and that’s called gastroschisis, where gastro- refers to the gastrointestinal tract, and -schisis refers to separation.

For your exams, a good hint is that this opening is almost always to the right of the umbilicus, although it’s not really known why.

This defect allows the bowel, and sometimes other abdominal organs, like the liver and the gallbladder, to protrude out where they are freely exposed to the outside environment.

The result is that these organs become irritated and inflamed.

There is a related condition called an omphalocele, where omphalo- refers to the umbilicus, and -cele relates to hernia or swelling.

Normally, during around the sixth week of development, the liver and intestines grow really quickly, and because the abdominal cavity is still pretty small, there’s limited space, which causes them to herniate through the umbilical ring into the umbilical cord.

At about week 10, though, the abdominal cavity typically has grown enough to allow them to come back from the umbilical cord.

With omphalocele, abdominal organs fail to return back to the abdominal cavity, and therefore stay in the umbilical cord all the way through fetal development and even after birth.

They can both be suspected prenatally, when alpha- fetoprotein, or AFP, is elevated in the mother’s blood.

AFP is only produced by the fetus.

It enters the maternal circulation and its levels increase with gestational age or number of fetuses.

Remember though, the most common causes of elevated maternal serum AFP levels are dating errors or underestimation of gestational age and multiple gestation, but still, it can be also due to neural tube defects and abdominal wall defects.

These defects can be seen with a prenatal ultrasound.

Ultimately, your test’s question will typically center around a newly born infant, whose mother received no prenatal care, and will let you choose between gastroschisis and omphalocele so you need to know two key differences.

First, in gastroschisis, the abdominal organs protrude through a separate hole on the right side of the umbilicus, while in omphalocele, they protrude through the umbilicus itself, and second, in gastroschisis, the abdominal contents are directly seen, as they are not covered by any peritoneal layer, whereas, in omphalocele, they are clearly contained in a bubble or peritoneal sac.

Now, let’s talk about some other types of congenital herniations.

First there’s congenital diaphragmatic hernia where a malformation of the diaphragm leaves a hole that allows the stomach, and sometimes the intestines, to herniate upwards into the thoracic cavity.

They can also push on blood vessels supplying the lungs, causing pulmonary hypertension.

Now an interesting fact is that the herniation is usually towards the left side, so the left lung is more often affected.

After birth the infant can develop respiratory problems like tachypnea, breathing difficulties, respiratory failure and cyanosis.

Next, we have congenital umbilical hernia which is when the intestines herniates through a weakened umbilical fibromuscular ring.

So the intestines herniate through the umbilicus instead of to the right of it like in gastroschisis.

Another clue is that unlike gastroschisis, the intestines are fully covered by skin, so it looks like a protruding bulge from the bellybutton.

Normally, umbilical hernias are self limiting, and disappear within the first 2-5 years of life.

However, a large hernia can cause bowel strangulation, resulting in ischemia and necrosis.

Finally, we have indirect inguinal hernia.

This happens when the deep inguinal ring in the pelvis fails to close and part of the intestine herniates into the inguinal canal.

A high yield concept is how to differentiate this condition from direct inguinal hernias, where the intestines herniates directly through a weakened section of the posterior wall of the inguinal canal, often due to weakened muscles or increased intra-abdominal pressure.

Next, indirect hernia presents as a bulge lateral to the lower epigastric vessels while direct is medial.

For symptoms, both types cause groin pain, especially when there’s increased abdominal pressure, like when you’re lifting heavy objects, laughing, or coughing. In males, the intestine can protrude into the scrotum, causing pain and a sensation of fullness in the testicles.

If the bowels become strangulated, there will be a sudden, severe pain along with nausea, vomiting and sometimes, fever.

So, since we’ve talked about finding the GI viscera where they don’t belong, let’s change gears and talk about atresia, or the absence of parts of the GI tract.

So first, there’s esophageal atresia where the esophagus doesn’t develop properly and ends in a blind pouch.

This is often associated with a defect in the tracheoesophageal septum, so a problem that often accompanies this condition is tracheoesophageal fistula, where an abnormal connection forms between the esophagus and trachea.

Since these babies have difficulty swallowing anything, they can present with excessive drooling.

When feeding, they’ll gag and throw up the food.

The fistula to the trachea also cause problems when feeding, like coughing, choking and even cyanosis!

An important complication is food aspiration, which can lead to pneumonia.

Next we have intestinal atresia, and two common types are duodenal and jejunoileal atresia, but it could also happen in the colon or anus.

Smoking and premature birth are risk factors for both.

Duodenal atresia is caused by a failure to recanalize.

The primitive gut tube undergoes a solid stage where the proliferating cells fill it up, so it’s more like a solid rod.

Then it undergoes recanalization where the lumen re-forms.

When it fails in the region that gives rise to the duodenum, we get atresia.

Since this region also give rise to the pancreas and hepatobiliary system, problems like biliary atresia and annular pancreas often accompanies duodenal atresia.

Jejunoileal atresia, on the other hand, is often due to ischemia, leading to necrosis and reabsorption of sections of the gut tube during development.