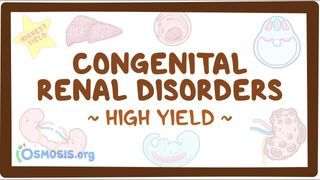 Two people came to the Nephrology ward one day.

The first is 29 year old Dan, who presents with hypertension, gross hematuria, and flank pain.

Dan’s family history showed that his grandmother died of a berry aneurysm.

Next is 35 year old Heather.

She doesn’t present have any symptoms, but she has been referred to the nephrology clinic because her primary care doctor discovered that she her kidneys have a “weird shape” on an abdominal x-ray.

Dan had many cysts of different sizes on both kidneys, while Heather’s kidneys are located lower than normal and appear fused together.

Both Dan and Heather have congenital renal disorders.

The renal system starts developing during week 4 of intrauterine life.

It comes from the mesoderm, which is one of the three primitive germinal layers.

More specifically, it develops from a portion of the mesoderm called the intermediate mesoderm.

During renal development, the nephrogenic cord gives rise to three sets of structures: the nonfunctional pronephros in the embryo’s head region which regresses by the end of week 4.

Then, the mesonephros forms, appears in the thoracic and upper lumbar region and acts as temporary kidneys until they regress in week 12.

Finally the metanephros develops in the pelvic region, and it forms the permanent kidneys.

At the same time, the intermediate mesoderm gives rise to another tissue called the metanephric blastema.

The blastema release growth factors that stimulates the ureteric bud to become the ureter, the renal pelvis, the renal calyces, and the collecting ducts.

Meanwhile, the ureteric bud release growth factors that cause the metanephric blastema to develop into nephrons.

At around week 20, the metanephric kidneys take over urine production, this becomes the major source of amniotic fluid.

As they continue to grow, they move up from the pelvis to reach their adult position.

Okay, so if there’s a problem during the development of the kidneys we can get oligohydramnios, or a deficiency of amniotic fluid.

As a result, a number of things can happen leading to the so called Potter sequence.

Not only that though, with less amniotic fluid, there’s less space in the amniotic sac, and so the fetus is literally compressed into a smaller space, which causes developmental abnormalities like a flattened face, wrinkly skin, low-set ears, as well as limb abnormalities like clubbed feet.

Some renal conditions make it impossible for urine to be excreted, in which case there will also be renal failure in utero.

Okay, now, one high yield fact is remembering the specifics for Potter sequence.

We have a mnemonic for that: P is for Pulmonary hypoplasia, O is for oligohydramnios, first T is for Twisted face, second T is for Twisted skin, E is for extremity defects and R is for renal failure.

Okay, let’s now let’s talk about each of the congenital renal disorders.

To make things easier, we can split them into cystic and non-cystic disorders.

With ARPKD, someone inherits a mutation on both copies of the PKHD1 gene, which codes for the fibrocystin protein.

Fibrocystin is found in the collecting ducts, as well as in the epithelial cells of the hepatic bile duct.

The lack of fibrocystin leads to cystic dilation of the collecting ducts in both kidneys.

Individuals with ARPKD can develop Potter sequence in utero, and the most common cause of death in these individuals is pulmonary hypoplasia.

If they don’t develop Potter sequence, then after birth, they develop progressive renal failure and systemic hypertension.

The liver is also affected and they can have congenital hepatic fibrosis which leads to portal hypertension.

ADPKD is an inherited genetic disorder mostly caused by mutations in the PKD1 gene, but mutations can also happen in the PKD2 gene. Now, PKD1 and PKD2 code for the polycystin 1 and polycystin 2 proteins, respectively.

In the nephron, polycystin 1 and 2 inhibit cell growth and proliferation through signaling pathways that’s not well understood.

Now, a person who develops ADPKD would have inherited a single mutation in PKD1 or PKD2.

This leaves one functional copy of the gene in every cell, which allows for the production of polycystin 1 or polycystin 2.

However, there is something called the “second hit” theory.

This means that a random mutation can occur in the remaining good copy of the gene later in life.

This disrupts the regulation of renal cell growth and proliferation, leading to cyst formation.

Overtime, these cysts will fill with fluid and enlarge, causing damage to the surrounding tissue, hypertension, and flank pain.

Eventually this will cause kidney damage.

Now, if there’s hypertension and signs of kidney damage like proteinuria, the best treatment is with ACE inhibitors or ARBs.

Individuals can have cysts pop up in the liver too, which will lead to liver failure.

They are also more likely to develop berry aneurysms in the cerebral arteries, usually in the Circle of Willis.

These can rupture and cause subarachnoid hemorrhage.

Some individuals may also present mitral valve prolapse or diverticulosis.

For you tests, some clinical clues that should make you think of ADPKD include flank pain, hematuria, hypertension and a family history of sudden death due to aneurysms.