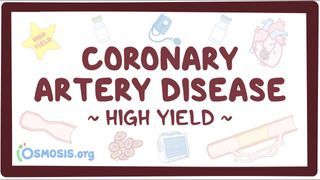 In an urban emergency department, 3 people came in for chest pain.

The first is Anish, a 54 year old man with a known history of hypertension, hyperlipidemia, and 25-pack year smoking.

He’s complaining of shortness of breath, and squeezing, retrosternal chest pain that radiates to his neck, jaw and left arm.

He’s been having these episodes but they only come after riding his bicycle for at least 20 minutes, and is relieved once he rests.

Next, is Erica, a 66-year old woman with a history of diabetes mellitus who complains of sudden-onset shortness of breath, fatigue and dizziness, but no chest pain.

An ECG reveals ST-segment depression, and troponin levels are elevated.

Finally, There’s Tyrion, a 45-year old man, with a known history of hypertension, diabetes, and hyperlipidemia.

He complains of epigastric abdominal pain at rest, shortness of breath, sweating and lightheadedness for the past 30 minutes.

Reduced oxygen supply to the heart is defined myocardial ischemia, which results in a severely reduced ability of the heart muscle ability to contract.

If this is prolonged, it can go on to cause myocardial infarction, otherwise known as heart attack, which refers to death of heart muscle.

Risk factors for atherosclerosis can be divided into modifiable ones, which include age, with men greater than 45 years and women greater than 55 years being at risk, and family history of coronary artery disease, and non-modifiable ones, like lipid abnormalities including elevated LDL or low HDL levels, as well as hypertension, diabetes mellitus and smoking.

In a coronary embolism, pieces of a clot from another site break off and can travel into a coronary artery, occluding it.

Risk factors for a coronary embolism include atrial fibrillation, infective endocarditis, a left atrial or ventricular thrombus or in individuals undergoing cardiac catheterization.

Also, other vasculitides like polyarteritis nodosa can also cause coronary artery disease.

Then, another cause of coronary artery disease is aortic valve stenosis.

See, the right and left main coronary arteries branch off the base of the aorta, and so in aortic stenosis, not enough blood gets through the aorta and into the coronaries, resulting in myocardial ischemia.

Also, any cause of concentric ventricular hypertrophy, such as aortic valve stenosis, hypertension, or hypertrophic cardiomyopathy may result in coronary artery disease, because you essentially have more heart muscle to supply.

Now let’s take a look at the presentations of coronary artery disease, starting with stable angina!

This occurs secondary to myocardial ischemia, caused by a fixed atherosclerotic plaque occluding more than 75 percent of the coronary artery lumen.

What you must remember here is that this results in reversible cell injury.

An infarction, on the other hand, is when there’s irreversible cell injury or cell death.

Now, stable angina manifests as a deep, poorly localized, squeezing, crushing or suffocating retrosternal pain that may radiate to the arm, jaw or neck.

Lots of adjectives. It’s often accompanied by other symptoms, such as shortness of breath, nausea, vomiting, diaphoresis, fatigue or dizziness.

A high yield fact is that this chest pain is reproducible during any activity that increases myocardial oxygen demand, such as physical exertion or emotional stress, and is relieved within 5 minutes by rest or sublingual nitroglycerin.

The term “stable” refers to the atherosclerotic plaque itself, which hasn’t ruptured yet and is structurally stable.

Now, sometimes in stable angina, an atherosclerotic plaque can cause near-total occlusion of the coronary artery, yet individuals may not develop infarction.

The reason is because athersclerotic plaques grow slowly, giving time for the heart to develop collateral circulation that supplies the hypoperfused area.

The ECG in stable angina is typically normal at rest, but may become abnormal on stress testing, which measures the heart's ability to respond to external stress in a controlled clinical environment.

The stress response is induced by exercise or by stimulation with medications, like dipyridamole.

Now, when a vasodilating medication like dipyridamole is given to an individual with stable angina, coronary steal syndrome may occur.

That’s because it causes vasodilation of all coronary arteries, except the ones which are obstructed - because beyond the obstruction, the coronary artery is already maximally dilated.

The end result is that blood is diverted, or stolen, away from the ischemic myocardium to non-ischemic areas, which further worsens the ischemia.

This shows in the ECG as an ST-segment depression.

However, a high yield fact is that cardiac biomarkers like troponin levels are always normal because there’s ischemia, but no infarction.

A variant of angina is called well... variant angina, or Prinzmetal angina.

For example, the exam may tell you about an individual with a history of migraines, and triptans like sumatriptan are one of the treatment options for migraine.

Due to transmural ischemia, a 24-hour ECG called a Holter monitor classically shows transient elevation of the ST-segment, but troponin levels are normal, because once again, there is no infarction.

To help with the diagnosis, low doses of vasoconstrictive medication called ergonovine are given to provoke vasospasm which results in transient ST-segment elevation.

Treatment includes calcium channel blockers and nitroglycerin, which relax the vascular smooth muscle, and cessation of the trigger.

Okay, in stable angina, the atherosclerotic plaque was fixed and not disrupted.

But when the atherosclerotic plaques are disturbed, we get the next three disorders: unstable angina, NSTEMI and STEMI.

These three are huddled together under the umbrella of acute coronary syndrome, or ACS.

An acute coronary syndrome typically manifests as sudden, new-onset angina, or an increase in the severity of an existing stable angina.

This may be an increase in the frequency or intensity of episodes, when they can be triggered by less exertion than before, or when symptoms occur at rest. Sometimes, though, there are atypical presentations.

Older people, females, and individuals with diabetes can present without chest pain.

Instead, they come with vague symptoms like shortness of breath, fatigue, and dizziness.

Now, plaques are made of a fibrous cap and a necrotic lipid core and the composition of the plaque determines the risk of rupture.

The high yield concept here is that a thin fibrous cap and a rich lipid core mean that the plaque is at high risk of rupture.

When a plaque ruptures, the underlying collagen is exposed, and in response, platelets quickly aggregate, forming a thrombus.

Okay in unstable angina, the atherosclerotic plaque ruptures and causes near-total but incomplete occlusion of the coronary artery.

The ECG shows ST-segment depression or T-wave inversion, but troponin levels are normal, because there is no myocyte necrosis.

But if the troponin levels are elevated, then we now call it NSTEMI, which signifies an infarction beneath the endocardium, also called a subendocardial infarct.

The infarct happens here because the coronary vessels run along the epicardium, the outer one-third of the heart wall.

So this is the farthest area from the blood supply.

Now, the reason we call it NSTEMI is because on ECG, a subendocardial infarct manifests with changes like ST-depression or T-wave inversion, however it never shows ST-segment elevation.

If there’s ST segment elevation, then it’s a STEMI, which happens when the thrombus occludes 100 percent of the lumen.

Troponin levels are also elevated in a STEMI, but it’s the ST-segment elevation on an ECG that immediately clinches the diagnosis.

The reason why we’re talking about troponin, of which there are two types, troponin I and T, is that, together with CK-MB, which is a combination of creatine kinase enzymes M and B, they make up what’s known as the key cardiac biomarkers.

So, when there’s been irreversible damage to heart cells, their membranes become damaged and these proteins and enzymes inside escape, and can enter the bloodstream.

Both troponin I and T levels can be elevated in the blood within 2-4 hours after infarction, and usually peak around 48 hours, but stay elevated for 7-10 days.

CK-MB starts to rise 2-4 hours after infarction, peaks around 24 hours, and returns to normal after 48 hours.

Since CK-MB returns to normal more quickly, it can be useful to diagnose reinfarction, a second infarction that happens after 48 hours but before troponin levels go back to normal.

Bare in mind though that unlike troponins, CK-MB is not specific for cardiac injury and it may also be elevated in cases of skeletal muscle damage elsewhere in the body, like trauma, heavy exertion, and myopathy.

Now for your exam, you might be asked to locate the infarct and the vessel involved based on the on the ECG.

This can be done by locating which leads had the ST elevation: V1 and V2 involvement is an anteroseptal MI, which means the left anterior descending artery, or LAD is involved.

V3, V4 involvement is an anteroapical MI, which means the distal part of the LAD is involved.

V5,V6 involvement is an anterolateral MI, which involves the LAD or left circumflex artery.