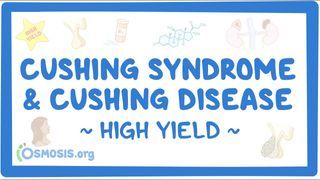 On the Endocrinology ward, two people came in with similar symptoms.

One of them is 45 year old Samantha, who complains of gaining a lot of weight lately.

She also had many viral and bacterial infections lately.

On clinical examination, there’s truncal obesity, a large hump behind her neck, and striae on her abdomen.

Her arterial pressure was elevated and she also had hyperglycemia.

The other person is 38 year old Dan who is also obese, and has an abnormally round face.

He has arterial hypertension and hyperglycemia.

Unlike Samantha, Dan is not taking any medications. A 24 hour urine free cortisol was done in both individuals and levels were high.

Now, both individuals suffer from an endocrine disorder that involves high levels of cortisol. This is generally called Cushing syndrome.

The adrenal cortex is the outer part of the adrenal gland and is subdivided into three layers- the zona glomerulosa, the zona fasciculata, and the zona reticularis.

Zona fasciculata is the middle zone and also the widest zone, and ACTH specifically stimulates cells in this zone to secrete cortisol.

This is a class of steroids, or lipid-soluble hormones, called glucocorticoids.

Glucocorticoids are not soluble in water, so most cortisol in the blood is bound to a special carrier protein and only about 5% is unbound or free.

In fact, only this small fraction of free cortisol is biologically active, and its levels are carefully controlled.

Excess free cortisol is filtered in kidneys and dumped into the urine.

Free cortisol in the blood is involved in a number of things and it’s part of the circadian rhythm.

Cortisol levels peak in the morning, when the body knows we need to “get up and go” and then drop in the evening, when we’re preparing for sleep.

In times of stress, cortisol increases gluconeogenesis, proteolysis and lipolysis.

Cortisol also helps maintain blood pressure by increasing the sensitivity of peripheral blood vessels to catecholamines, which further cause vasoconstriction.

Cortisol helps to dampen the inflammatory and immune response by reducing the production and release of inflammatory mediators, as well as inhibiting the proliferation of T-lymphocytes.

For all this to work properly, though, the levels of free cortisol have to stay within the normal range.

To do that, the body uses negative feedback, which means that high levels of cortisol tell the hypothalamus and pituitary gland to decrease their secretion of CRH and ACTH, respectively.

With less ACTH floating around, the zona fasciculata gets less stimulation to make cortisol, and eventually, cortisol levels go back down to the normal range again.

A very high yield fact is that the majority of cases of Cushing syndrome occur in individuals using exogenous cortisol, like prednisone, over a long period of time, often as a treatment for autoimmune and inflammatory conditions, like rheumatoid arthritis or poorly controlled asthma.

They have structures similar to endogenous cortisol and mimics its actions in various tissues.

In fact, exogenous cortisol can also cause negative feedback on the hypothalamus and the pituitary gland, leading to a decrease in CRH and ACTH, which in turn, shuts down cortisol production from the zona fasciculata.

Over time, this lack of stimulation can cause zona fasciculata of both adrenal glands to physically shrink or become atrophic.

Even though this results in less endogenous cortisol production it still doesn’t quite compensate for the huge levels of exogenous cortisol, and that causes Cushing syndrome to develop.

Now, if the medication is stopped abruptly though, the atrophied adrenal glands can’t produce enough cortisol, so we get adrenal insufficiency.

If the cortisol level is low enough, it might trigger an adrenal crisis.

This is a life threatening condition with symptoms like fever, hypotension, severe abdominal pain with vomiting and diarrhea, confusion, psychosis, and coma.

The most common cause is Cushing disease where the pituitary releases too much ACTH.

For your exams, remember the leading cause is a pituitary adenoma, which is a benign tumor of the pituitary gland.

The exact reason for the development of this sort of benign tumor isn’t known, and the pituitary adenoma simply grows in size and secretes excess ACTH.

This causes the zona fasciculata of both adrenal glands to undergo hyperplasia and secrete excess cortisol.

Apart from pituitary adenomas, there are ectopic sources of ACTH such as paraneoplastic syndromes.

The high yield ones to remember are small cell lung cancer and bronchial carcinoids.

In these cases, the excess ACTH is coming from somewhere other than the pituitary, so these cases are not considered Cushing disease.

Another common cause of endogenous Cushing syndrome is tumors of the adrenal glands that make excess cortisol, like adrenal adenomas, which are benign tumors, and adrenal carcinomas, which are malignant tumors.

In both adrenal adenomas and carcinomas, the cells of the zona fasciculata within the adrenal cortex start dividing abnormally and secrete excess cortisol.

As before, the excess cortisol provides negative feedback to the hypothalamus and pituitary gland, suppressing CRH and ACTH production.

Although this doesn’t have any effect on zona fasciculata of the involved adrenal gland, since the neoplastic cells are autonomous, meaning that they grow independently from ACTH.

However, the zona fasciculata of the uninvolved, adrenal gland shrinks and atrophies . This could be a clue to help you narrow down the cause to the adrenal gland.

The net result, though, is abnormally high levels of cortisol, and that causes Cushing syndrome. Regardless of the cause, the symptoms of Cushing syndrome are directly related to the effects of excess cortisol and other glucocorticoids on its various target tissues.