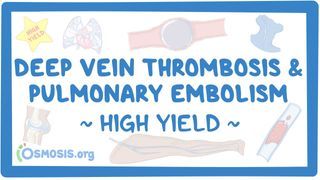 Hannah is a 42 year old woman who came to the emergency department due to pain in her right calf.

She reports flying from Japan back to the United States 2 days ago.

She denies fever, chills, or history of trauma to the leg.

She reports a 25 pack year smoking history for 20 years, and she takes oral contraceptive pills.

On physical examination, she is stable, and her BMI is 32.

Her right leg is shown in this image.

On laboratory investigation, her D-dimer levels are elevated.

Deep vein thrombosis, or DVT and pulmonary embolism, or PE are a spectrum of clinical manifestations that result from venous thromboembolism.

The pathogenesis and risk factors of both DVT and PE centers around Virchow’s triad, that is; stasis of blood flow, hypercoagulability, and endothelial injury.

Board exams like to test your ability to identify a PE by using scenarios that promote venous stasis such as paralysis after a stroke, the postoperative period, as well as long drives or flights.

An interesting risk factor is pregnancy, where the enlarged uterus may compress the iliac veins, causing stasis of venous outflow.

Another similar cause is May-Thurner syndrome where the left iliac vein gets sandwiched between the right iliac artery anteriorly and the lumbar vertebrae posteriorly, which also leads to venous stasis.

Hypercoagulability occurs is when the scale is tipped towards clot formation.

This may be genetic, such as factor V Leiden, or antithrombin III deficiency.

Or it may be acquired, like when there’s high estrogen during pregnancy or when using estrogen-containing oral contraceptive pills.

This is especially prominent in membranous glomerulonephropathy.

Other acquired causes of hypercoagulability include malignancies, sepsis, and autoimmune diseases like lupus or antiphospholipid syndrome.

Finally, endothelial damage, like when there’s truma, can expose the underlying collagen, which initiates the coagulation cascade.

Alright, now DVTs typically affect the deep veins of the lower extremity, such as the popliteal, iliac and femoral veins.

The popliteal veins of the calf are most commonly affected, however, it’s important to remember that the more proximal iliofemoral DVTs that commonly embolize and cause PE. DVTs present with unilateral, painful swelling and redness of the affected extremity.

However, it’s important to know that there are other differential diagnoses, like cellulitis or a popliteal Baker cyst that can present similarly.

So, when it comes to diagnosis, the best choice on an exam is a compression ultrasound with Doppler.

Normally, veins are easily compressible using the ultrasound probe, but when there’s a clot, the affected vein becomes incompressible.

Doppler is beneficial because they can also look at blood flow. Next, D-dimer is a fibrinogen degradation product that may be measured if DVT is suspected.

A negative test may be helpful to rule out DVT, but a positive test does not necessarily mean there is DVT, so D-dimer has a high sensitivity but a low specificity for DVT.

Now, PE most commonly occurs when a DVT breaks off and travels to the pulmonary artery or one of its branches.

When the pulmonary artery is obstructed, perfusion to the supplied segment of the lung is limited.

However, there’s nothing wrong with ventilation.

So now we have a ventilation-perfusion mismatch, or a V/Q mismatch where there’s plenty of oxygen in the alveoli, but there’s not enough RBCs to pick it up.

This decreases the oxygen saturation in the blood, or hypoxemia.

This process is called intrapulmonary shunting.

Additionally, peripheral chemoreceptors pick up on hypoxemia, and send signals to the brain to increase ventilation in an attempt to compensate. hyperventilation causes the individual to blow off lots of carbon dioxide, resulting in respiratory alkalosis.

Now, most of the time, when a clot occludes a blood vessel, the distal organ tissue dies becomes infarcted.

The lung is an exception, because it receives a dual blood supply from both the pulmonary artery and bronchial arteries, which are branches of the aorta.

Okay, so large emboli that occlude the pulmonary trunk place tremendous amounts of sudden pressure on the right heart, so it’s important for you to remember that this can result in acute right heart failure and a form of shock called obstructive shock.

Okay, now let’s tie the pathophysiology to the clinical presentation.

Hypoxemia and hyperventilation means individuals with PE present with sudden-onset shortness of breath and tachypnea.

Additionally, because PEs limits left ventricular stroke volume, the heart tries to compensate by increasing the heart rate, so tachycardia.

PE can also present with pleuritic chest pain that is worse on inspiration.

Additionally, hemorrhagic infarction may cause the individual to develop hemoptysis.