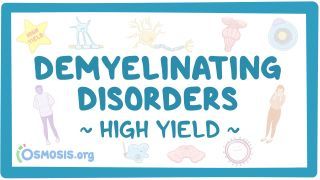 At the neurology department, a 23 year old male, named Charles, is brought by his parents because of weakness in his feet that started 2 days ago and worsened over time.

During clinical examination, the deep tendon reflexes in his lower extremities are decreased but sensation is intact.

Past medical history reveals a case of gastroenteritis about three weeks ago.

Next to Charles, there’s a 26 year old female, named Maria, that came in because of an episode of blurring in her left eye and pain during eye movement.

She had a similar episode a few months ago that lasted about a week and resolved without any treatment.

She also describes an episode where she felt an electric shock-like sensation through her body after having a hot shower.

Alright, so both of them have a demyelinating disorder.

This occurs when myelin, the protective sheath that surrounds the axons of neurons, is destroyed.

As a result, the destruction of myelin, or demyelination, makes communication between neurons difficult, ultimately leading to all sorts of sensory, motor, and cognitive problems.

Okay, now demyelinating disorders can be classified into two groups.

The first one includes disorders that affect the myelin in the CNS, such as multiple sclerosis, acute disseminated encephalomyelitis, progressive multifocal encephalopathy and central pontine myelinolysis.

The second group includes diseases that affect the myelin in the PNS, like Guillain-Barre syndrome and Charcot-Marie-Tooth.

Alright, so let’s take a closer look at these different demyelinating disorders, starting with the ones that affect the CNS.

Multiple sclerosis, or MS, is the most common demyelinating disorder and a very high yield topic for the exams!

It is an autoimmune disease, which means that demyelination occurs because the immune cells, like T cells, B cells and macrophages, attack the myelin.

T cells get through the blood brain barrier, and once inside the brain, they get activated by myelin.

This means that these myelin-specific T cells release cytokines that dilate the blood vessels, allowing more immune cells to get in, as well as directly cause damage to oligodendrocytes.

The cytokines attract B cells, which begin to make antibodies that mark the myelin.

Next macrophages see those antibodies and attack the marked oligodendrocytes.

Without oligodendrocytes, there’s no myelin to cover the neurons, leaving behind areas of scar tissue, also called plaques.

Okay, now, these immune attacks typically happen in bouts, because regulatory T cells will come in and inhibit the inflammatory process until the next time this process happens.

Early on in MS, the oligodendrocytes will heal and extend new myelin to cover the neurons, which is a process called remyelination.

But over time, the damage becomes irreversible with the loss of axons.

Now, the exact cause of MS is unknown, but it is linked to both genetic and environmental factors.

Genetic factors include the female sex and genes that encode a specific type of immune molecule, called HLA-DR2.

Vitamin D deficiency can explain why the rate of MS is higher among people that live further from the equator where there’s less sunlight.

Now a very high yield concept is the symptoms and presentation of MS.

There’s a lot of these because they depend on the location of the plaques.

When they build up in the brain stem it can affect nerve fibers that control muscles of the mouth and throat, leading to problems with eating and talking, and can lead to things like a new stutter.

It’s important to remember that plaques can form around the optic nerve causing optic neuritis that can lead to a decrease in visual acuity in the central field of vision and periorbital pain that is worsened by eye movement.

There’s also an afferent pupillary defect on the affected side and that causes paradoxical dilation of pupil in response to light, and that’s referred to as Marcus Gunn pupil.

There can also be diplopia, or double vision, due to internuclear ophthalmoplegia, or INO, which results from damage to the medial longitudinal fasciculus, or MLF in the brainstem.

INO impairs adduction in the ipsilateral eye, and cause nystagmus of the contralateral eye when it’s abducting.

So if the right MLF was damaged, then when an individual looks left, the right eye won’t adduct, and the abducting left eye will have nystagmus.

And when you ask the individual to look “cross-eye”, they can do it because convergence is unaffected.

Plaques also form along the motor pathways in the spinal cord, which can lead to motor symptoms like muscle weakness, muscle spasms, tremors, and ataxia.

In serious cases, this can lead to paralysis.

In addition, plaques in the sensory pathways can cause symptoms like numbness and paresthesias which is often a tingling feeling, painful itching, or burning sensation.

Finally, MS can also affect higher order activities of the brain, causing poor concentration and critical thinking, as well as depression and anxiety.

Now, two interesting features in MS that are difficult to pronounce are Lhermitte’s sign and Uhthoff's phenomenon.

Lhermitte’s sign is an electric shock-like sensation that radiates down the back with neck flexion.

Uhthoff’s phenomenon is a transient worsening of MS related neurological symptoms when the body temperature increases, like during exercise or a hot shower.

Now, individuals with MS can have more than one of these symptoms.

One common trio of symptoms that you have to remember for the exams is called Charcot’s neurologic triad, including: dysarthria, or unclear speech; nystagmus, which is involuntary rapid eye movements; and an intention tremor.

Also, another common but non-specific symptom in MS is fatigue that tends to worsen with heat exposure, and that’s high yield for the test!

The most common and the most likely to appear on your exam is relapsing-remitting MS.

This is characterized by clearly defined attacks followed by full or partial recovery, and in between the attacks, there is no progression of the symptoms.

An attack is an episode of focal neurological disturbance lasting longer than 24 hours with a preceding period of stability for at least 30 days.

Secondary-progressive MS starts off as relapsing-remitting MS, and over time, the symptoms and functional decline becomes continuous.

Primary-progressive MS doesn’t have periods of stability at all and symptoms worsen continuously over time.

This disease is characterized by sudden inflammation and demyelination at multiple sites of the CNS.

Just like multiple sclerosis, it is an autoimmune disorder and a type IV hypersensitivity reaction that ultimately leads to destruction of the oligodendrocytes and demyelination.

The difference is that acute disseminated encephalomyelitis typically occurs as a single demyelination event, that is thought to be triggered by an infection or a vaccine, whereas MS is progressive disease with recurrent bouts of demyelination.

Also, acute disseminated encephalomyelitis occurs more often in children, while MS is more common in young adults between the ages of 20 and 40, and that’s high yield for the exams!

Symptoms of acute disseminated encephalomyelitis have a sudden onset and progress rapidly.

These depend on where the demyelination occurs and can cause visual problems, seizures, weakness, irritability, confusion, drowsiness, and even coma.

Now, onto another demyelinating disease of the CNS, progressive multifocal leukoencephalopathy, or PML.

For the test, remember that PML is caused by the John Cunningham virus, or simply JC virus.

JC virus is transmitted from person to person through the respiratory and gastrointestinal tract, it then moves through the bloodstream and eventually enters kidney epithelial cells and starts replicating.

The immune cells can keep the virus in check by killing any cell that has replicating JC virus.

But the virus is not eliminated and remains latent in the kidneys.

They can become active again if the immune system gets weakened.

This is why a key clue to look for is the immune status of the individual, and high risk populations include HIV positive people, an individual with leukemia or lymphoma, or a patient taking immunosuppressive medications.

All of these affect the lymphocytes, which are critical in helping to keep JC virus under control.

So the JC virus can get into the blood and get through the blood brain barrier and into the brain.

Within the brain, JC virus begins to rapidly attack oligodendrocytes in multiple locations throughout the brain causing demyelination of axons.

Now, PML, primarily involves the parietal and occipital areas, so look for symptoms like changes in speech and loss of vision.

Other common symptoms include weakness, clumsiness due to lack of coordination, personality changes, and dementia.

The disease ultimately leads to death in about half of the cases, and those who survive often have serious neurological disability

Next up is central pontine myelinolysis, which is the destruction of the myelin around the axons that are in the central part of the pons.

The cause of destruction is rapid osmotic changes, and the pons is a part of the brain that’s particularly sensitive!

So the other name for central pontine myelinolysis is osmotic demyelination syndrome, and it’s a high yield topic for the exams!

When brain cells are in an environment with a low sodium concentration, called hyponatremia, there is a lower osmolality outside the cell compared to inside the cell and water flows into the cells.

Because the brain is restricted within the skull, there’s no space to expand and the brain gets compressed.

So the brain cells try to have fewer osmolytes, or osmotically active substances, in order to reduce the osmotic gradient, so that less water flows into the cell.

In the end, the cell will be in complete equilibrium with the hyponatremic extracellular space.

Now, let’s say that the hyponatremia is treated too quickly.

This time, the extracellular component has too much sodium, and that creates an osmotic gradient that pulls water out of the cell.

The cells don’t have enough time to allow osmolytes to enter and reestablish balance.

As a result, cells dehydrate, and that causes massive structural damage.

Now, in general, when oligodendrocytes and neurons get damaged, reactive astrocytes come to the site and form scar tissue to fill the empty space, a process called astrocytosis, or gliosis since astrocytes are a subtype of glial cells.

When there’s enough damage to the pons, it can affect the function of the cranial nerve nuclei that are housed in the pons.