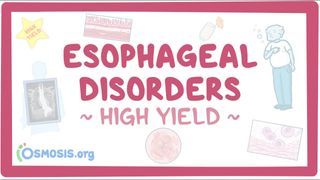 A 33-year-old named Ravi came to the clinic because he has difficulty swallowing food and water over the last 3 months.

Physical examination shows significant weight loss, of 7-kg or 15-lb, since his last visit 4 months ago.

At the same time, a 62-year-old man named Frank comes to the clinic because of bad breath, regurgitation of food overnight, and trouble swallowing food.

He has had these symptoms for several months.

Physical examination shows a mass on the side of the neck. v

Now, both Ravi and Frank have some form of the esophageal disorder.

Inflammatory esophageal disorders, also known as esophagitis, are characterized by an inflammation of the esophageal lining and based on the cause, they are also subdivided into several types.

First, there’s reflux esophagitis, which is associated with the reflux of gastric acid from the stomach back into the esophagus.

It is associated with medications such as nonsteroidal anti-inflammatory drugs or NSAIDs, bisphosphonates, tetracyclines, iron, and potassium chloride.

In caustic esophagitis, caustic agents, such as strong acids like vinegar or strong bases like detergents, cause esophageal lesions.

The next one is infectious esophagitis, which is most commonly seen in immunocompromised individuals, such as HIV-positive individuals.

The most common causes of HIV associated esophagitis include candida albicans, herpes simplex virus 1, and cytomegalovirus.

A high yield fact to remember is that with candida esophagitis, the upper endoscopy will show patches of adherent, white or grey pseudomembranes on the underlying mucosa.

The histopathology reveals yeast cells and pseudohyphae that invade mucosal cells of the esophagus.

Any attempt to remove the pseudomembrane can cause bleeding in the underlying mucosa.

With HSV esophagitis, a high yield fact to remember is that an upper endoscopy will show small vesicles and lesions that look like small punched-out ulcers; while the histopathology reveals eosinophilic intranuclear inclusions in multinuclear squamous cells at the margin of the ulcer.

For your exam, you have to know that these inclusions are called Cowdry type A inclusions.

This occurs as a reaction to food allergens and it can lead to dysphagia and food impaction.

Eosinophilic esophagitis is most commonly seen in individuals who have other allergies and a high yield fact that’s often used as a clue is that their esophagitis will be unresponsive to GERD therapy.

During an upper endoscopy, eosinophilic esophagitis is characterized by linear furrows and esophageal rings, which are thin mucosal bands that surround the esophagus.

Achalasia is when there’s impaired esophageal motility and the inability to relax the lower esophageal sphincter.

The most common cause of primary achalasia is idiopathic degeneration or damage of postganglionic inhibitory neurons in the myenteric, or Auerbach, plexus of the esophagus.

There’s also secondary achalasia which is caused by Trypanosoma Cruzi infection that cause Chagas disease, or extraesophageal malignancies.

So normally, the neuron in the myenteric plexus release inhibitory neurotransmitters, such as nitric oxide and vasoactive intestinal peptide, which relax the lower esophageal sphincter.

Eventually, the lack of inhibitory neurotransmitters leads to an increased resting lower esophageal sphincter tone, and this obstruction leads to dilatation of the esophagus.

These individuals present with progressive dysphagia for both solids and liquids, regurgitation of undigested food, aspiration, chest pain, heartburn, and weight loss.

In addition, they have an increased risk for esophageal squamous cell and adenocarcinoma.

This is also known as the bird’s beak sign.

The gold standard for diagnosis is esophageal manometry, which measures the strength and coordination of the esophageal contractions when a person swallows.

This measurement is done at multiple levels, including the upper, middle, and lower esophagus, as well as the lower esophageal sphincter.

Now, you might be asked to analyze manometry findings on your exam so let’s go over this.

Normally when a person swallows, involuntary contractions of the pharyngeal muscles propel the food into the esophagus.

Propulsion of the food bolus is followed by the contraction of the cricopharyngeal muscle which initiates the peristaltic wave of the esophagus.

This contraction is shown as an upward deflection on the upper esophageal manometry.

Next, the middle esophageal manometry reflects normal peristalsis of the middle part of the esophagus.

For treatment, the obstruction can be corrected with balloon dilation or increased tone can managed with local injection of botulinum toxin.

In diffuse esophageal spasm, there’s periodic, non-peristaltic contractions that occur simultaneously with each other.

In contrast to achalasia, diffuse esophageal spasm is associated with a normal lower esophageal sphincter tone since the spasms occur in the walls of the esophagus.

For your exam, you have to know that these disorganized involuntary esophageal contractions can cause intermittent dysphagia for both solids and liquids, and occasional retrosternal chest pain.

It’s important to note that the pain can mimic angina but it’s not associated with physical activity and is not relieved by rest; however this can still resemble unstable angina.

Therefore, every person that is suspected of having diffuse esophageal spasm should undergo a complete cardiac work-up to rule out any cardiac pathology.

If performed at the time of symptoms, barium swallow will show a "corkscrew" or “rosary bead” appearance of the esophagus, but this is not specific to diffuse esophageal spasm.

The gold standard for diagnosis is manometry which shows uncoordinated high-amplitude peristaltic contractions that can appear throughout the esophagus.

Finally, first-line medications in the treatment of diffuse esophageal spasm include nitrates and calcium channel blockers.

The next disorder is scleroderma or systemic sclerosis.

This is an autoimmune disease where there is fibrosis of the skin and other organs.

These include the esophagus, kidneys, heart, lungs, and muscles.