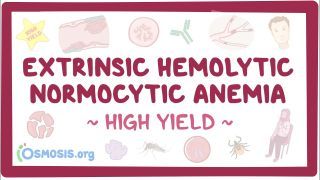 At the family medicine center, two people came in with progressive fatigue.

One of them is a 60 years old named Will whose past medical history included an aortic valve replacement with a mechanical valve due to severe aortic stenosis.

She was diagnosed a year ago with systemic lupus erythematosus, or SLE. CBC is ordered for both people and it shows low hemoglobin with normal mean corpuscular volume, or MCV and reticulocyte count index over 2%.

They also have increased LDH. Now, Will has schistocytes on peripheral blood smear, while Hanna has spherocytes.

Both Will and Hannah are suffering from anemia, which is defined as lower than average levels of hemoglobin, typically below 13.5 g/dL in adult men and below 12.0 g/dL in adult women.

For children, this level varies based on the age. Now, anemias can be broadly grouped into 3 categories based on =MCV, which reflects the volume of an RBC.

There are findings that can help identify the type of hemolysis. In intravascular hemolysis, hemoglobin that is released inside the vessels gets bound by a protein called haptoglobin and because they’re removed together, haptoglobin decreases.

Also, when haptoglobin gets overwhelmed, the rest of hemoglobin goes via the blood through the kidneys and into the urine resulting in hemoglobinuria.

Okay, now in extravascular hemolysis, RBCs are destroyed outside the vessels and so, haptoglobin is normal and there’s no hemoglobin or hemosiderin in the urine.

RBCs are usually destroyed in the spleen causing splenomegaly or the liver causing hepatomegaly.

Alright, now whenever there’s RBC lysis, an intracellular enzyme called lactate dehydrogenase, or LDH, spills out directly into the plasma and builds up in the blood.

Hemoglobin also spills out of the cell and breaks up into globin and heme.

If all of a sudden, your body starts breaking down more RBCs than the liver cells can handle, the excess bilirubin stays in the blood and cause jaundice where the bilirubin deposits in the skin and the eyes, causing them to turn yellow.

Also, when there’s too much bilirubin in the bile, it can form pigmented gallstones.

Some of the bilirubin is converted to urobilin which is what gives urine that yellow color, but if there’s too much of it, the urine becomes a much darker, tea-like color.

Okay, so let’s take a closer look at these different extrinsic hemolytic anemias, starting with autoimmune hemolytic anemia where antibodies and complement are directed against RBCs, leading to their destruction.

It’s like the RBC equivalent of immune thrombocytopenic purpura, or ITP, a disorder where autoantibodies bind to the platelet receptor and cause them to be targeted by immune cells in the spleen for destruction.

In fact, some patients develop both conditions together, and that’s called Evan’s syndrome.

Now, it’s important to remember the causes, since they might be the best clues for identifying autoimmune hemolytic anemia in the exams.

Warm antibody hemolytic anemia is typically seen in chronic lymphocytic leukemia, or CLL, systemic lupus erythematosus, or SLE, and with the use of antibiotics like penicillins and cephalosporins, sulfa drugs, and the antihypertensive drug, methyldopa.

Next up is microangiopathic hemolytic anemia that occurs in the small blood vessels and include thrombotic thrombocytopenic purpura, or TTP, hemolytic-uremic syndrome, or HUS, and disseminated intravascular coagulation, or DIC.

In these disorders, there’s excessive clot formation so when normal RBCs flow through these blood vessels, they get banged up and damaged, leading to intravascular hemolysis.

In TTP, there’s a deficiency of ADAMTS-13, a metalloproteinase that breaks Von willebrand factor, a protein needed for the formation of clots and their adhesion to the endothelial lining.

So When there’s not enough ADAMTS-13, there’s excessive clot formation, and these clots end up damaging RBCs.

TTP can be caused by a genetic mutation or it can develop after exposure to antiplatelet medications like ticlopidine and clopidogrel, or chemotherapeutic agents like cyclosporine and gemcitabine.

In some cases it can also be associated with diseases like systemic lupus erythematosus.

Alright, moving onto HUS. Typical HUS, occurs after an infection by a shiga-toxin bacteria.

The most common is Escherichia coli, but others include shigella, and salmonella.

A high yield fact for your exams is that this often occurs in children after an episode of gastroenteritis caused by these bacteria.

The toxins they release destroys colonic epithelial cells, causing bloody diarrhea, and then enters the circulation, where it damages the endothelial cells causing massive release of von willebrand factor and excessive clot formation throughout the body.

Typical HUS has good prognosis. Now, the atypical HUS is not associated with shiga-toxin, may occur at any age, and has a relatively poor prognosis.

Next up is DIC, where there is a massive overactivation of the coagulation system in response to something like sepsis or trauma.

This leads to widespread clotting, organ ischemia, and microangiopathic hemolytic anemia, while at the same time depletes platelets and clotting factors, which paradoxically, leads to bleeding.