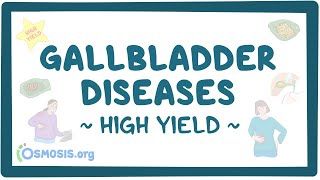 In the emergency department, there is a 45 year old obese female from Spain, named Valencia, who came in with right upper quadrant and epigastric pain that began suddenly a couple of hours ago, right after her lunch.

The pain is steady in nature, and radiates to the right shoulder.

Her temperature is 38 °C or 100.4 °F and on physical examination, there is pain with deep palpation of the right upper quadrant.

At the same time, at the gastroenterology clinic, a 64- year old Caucasian female, named Ashley, is incidentally found to have diffuse gallbladder calcification on an abdominal x- ray.

She is totally asymptomatic except for some episodes of vague abdominal pain after meals.

Both Valencia and Ashley have gallbladder diseases.

The gallbladder’s job is to basically store and concentrate bile.

When you eat high fat foods, they make their way to the small intestine, and stimulate the enteroendocrine cells to secrete cholecystokinin into the bloodstream.

Cholecystokinin, in turn, makes its way to the gallbladder and tells it to squeeze bile out into the small intestine.

Now, bile’s a fat emulsifier, essentially helping to break fats or lipids into small “micelles”, making them easier to absorb.

Remember that bile is mostly made up of bile salts and acids, cholesterol, phospholipids, proteins, bilirubin and small amounts of various other compounds, like water, electrolytes, and bicarbonate.

So, let’s start with cholesterol gallstones.

Remember for your exams that these are the most common type, accounting for around 75–90% of cases of all gallstones.

Generally speaking, cholesterol stones have a characteristic yellow color and are radiolucent, meaning that they can’t be seen on X-ray.

This is very high yield and is often used as a clue on your exams!

However remember that these stones can be seen on X-ray in rare cases when they bind with enough calcium.

In other words, this occurs either when there’s too much cholesterol in the bile, or when there are not enough bile salts and acids or phospholipids.

Risk factors are commonly tested and include things like female sex, pregnancy and oral contraceptive pills, obesity, and age, especially after 40.

These can be remembered by the 4 F’s—female, fertile, fat, and forty.

That’s mostly because female sex as well as pregnancy and oral contraceptive pills are associated with higher estrogen levels, which then increase the activity of HMG-CoA reductase, the enzyme responsible for cholesterol synthesis in the liver.

Obesity is associated with increased cholesterol levels, while it is unclear why age is related.

Fibrates work by inhibiting an enzyme called cholesterol 7ɑ-hydroxylase, which catalyzes the rate-limiting step in the synthesis of bile acids.

Once fibrates inhibit this enzyme, they increase the cholesterol content of bile, but at the same time, they decrease the production of bile acids.

Next, bare in mind that anything affecting the terminal ileum, like Crohn’s disease, or ileal resection, can reduce the reabsorption of bile acids into the circulation and back to the liver.

On another level, gallbladder stasis, or inactivity, has also been linked to forming stones.

If the bile just sits there, it can cause the solid to separate and precipitate out.

Bilirubin gallstones are less common and are formed when bilirubin in the bile combines with calcium to form the solid precipitate calcium bilirubinate.

Since they’re made partly of calcium, bilirubin gallstones are usually radiopaque, meaning they show on X-ray.

For your exams, it’s important to know that the main risk factor is extravascular hemolysis, which is common in sickle cell disease, beta thalassemia and hereditary spherocytosis.

What happens here is that splenic macrophages are eating up loads of red blood cells, thus ramping up the production of unconjugated bilirubin.

All this extra bilirubin is then conjugated by the liver and excreted into the gallbladder.

A high yield fact here is that these stones are black pigmented.

In other cases, pathogens like E. Coli, Ascaris lumbricoides, and Clonorchis sinensis, can infect the biliary tract, and bring about enzymes that hydrolyze conjugated bilirubin into unconjugated bilirubin, which then crystallizes into stones.

These are usually brown- pigmented.

In terms of symptoms, most people walking around with gallstones are totally asymptomatic; therefore, this condition is also called asymptomatic cholelithiasis.

First of all, there’s biliary colic, where a gallstone gets lodged in the cystic duct and causes pain when the gallbladder contracts after meals.

This condition is called symptomatic cholelithiasis, and it tends to cause a steady and dull upper right quadrant pain for a few hours, which then subsides when the gallstone dislodges.

In symptomatic cholelithiasis, laboratory findings are not helpful since there’s no damage to the gallbladder.

Instead, diagnosis is made by abdominal ultrasound, which shows a gallbladder filled with gallstones in the absence of signs of gallbladder inflammation, such as wall thickening and pericholecystic fluid.

Okay, if the gallstone doesn’t dislodge and stays in the cystic duct for longer stretches, it can lead to acute cholecystitis or inflammation of the gallbladder.

The idea here is that as the gallbladder squeezes more and more, the stone might get even more stuck.

And at this point the bile, being stuck in the same place, irritates the mucosa in the walls leading to inflammation, distention and pressure buildup.

A high yield fact is that this is the perfect environment for bacterial growth, most commonly E coli.

On your exams, remember the symptoms of acute cholecystitis are pain in the right upper quadrant, which can also radiate up to the right scapula and shoulders, which is known as Boas sign.

There’s usually also nausea and vomiting, as well as fever.

Now, on physical examination, while deeply palpating the costal margin at the right upper quadrant, you can ask the person to take a deep breath.

So, as the diaphragm pushes down on their inflamed gallbladder, it will cause pain, forcing the person to stop breathing in further.

This is called a positive Murphy’s sign, which is an extremely high yield clue.

An important lab marker is high alkaline phosphatase, or ALP, which is released in the bloodstream as the bile duct cells get damaged and die.

Also, there’s a high white blood cell count and high CRP; which are both elevated when there's inflammation.

Ultrasound will detect the stones and the signs of gallbladder inflammation, such as gallbladder wall thickening and pericholecystic fluid.

In this diagnostic procedure, a radiotracer is used to evaluate the function of the gallbladder and biliary system.

In other words, if HIDA scan fails to visualize gallbladder, then we can suspect that there’s an obstruction of the cystic duct.

Now, in the majority of cases, the stone falls out of the cystic duct on its own.

If obstruction occurs, pressure can keep building up.