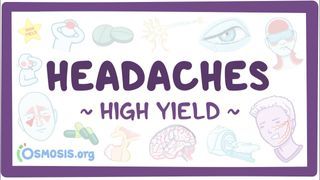 At the neurology department, there’s a 34-year old male, named Andrew, who came in due to headache.

This is the first time he’s had a headache like this and described the pain as “the worst headache of his life”.

Next to Andrew, there’s a 30-year old female, named Anna, who complains of recurrent episodes of unilateral, pulsating headaches that usually occur when she’s tired, and last approximately 6 hours each time.

Her mother also suffers from similar episodes of headache.

Finally, there’s a 40-year old male, named Evan, who has had recurrent attacks of excruciating headaches for the past two months.

The pain is located behind his eye, typically occurs in the morning, and lasts for about one hour. He also has nasal congestion and lacrimation of the affected eye.

He has no family history of similar episodes.

All three people suffer from headaches.

A headache occurs when any of the pain-sensitive structures in the head and neck are stimulated.

These include the meninges, blood vessels, nerves, and muscles. Headaches can be classified into two types.

The first are called primary headaches, and they’re more common.

These are chronic or recurrent headaches and include tension headaches, migraines, and cluster headaches.

Now, the second type are called secondary headaches, and these are acute headaches from a specific underlying cause like a serious head injury, infection, or a brain tumor.

Tension headaches are the most common type and they’re more common in females.

On the exams, the classic description is a headache that is slowly-progressive, bilateral, tight, “band-like” headache with no other associated symptoms.

Typically, they lasts from 30 minutes to up to a week, and is usually triggered by stress and dehydration.

It is thought that these headaches are due to an increased sensitivity to pain due to the release of vasoactive neuropeptides like substance-P and calcitonin gene-related peptides.

Now, a migraine headache is another primary headache and it’s also more common in females. Family history of migraines is often present.

They usually have triggers, such as specific foods, weather, bright lights, loud noises, physical exertion, or lack of sleep.

For the exams, you have to remember that migraine headaches usually last between 4 to 72 hours, and it’s usually a severe, unilateral, pulsating or throbbing pain that’s aggravated by movement.

Additionally, individuals can have nausea or vomiting.

Often, individuals isolate themselves in a dark room to avoid light and sound, and this is called photophobia and phonophobia.

Some migraines can cause an aura before or during the headache, which consists of visual symptoms like seeing bright lights, zigzag lines, or other neurological symptoms like tinnitus, aphasia, or confusion.

The difference is strokes don’t usually cause severe headaches.

For abortive therapy, NSAIDs and other analgesics can be used. Sumatriptan is used to treat more severe migraines.

For prevention, lifestyle changes can make a difference, but beta-blockers like propranolol, or amitriptyline can also help.

Now, cluster headaches are the rarest form of primary headache and usually occur in males.

In the exams, cluster headaches are classically described as an excruciating, stabbing pain located unilaterally behind the eye.

They usually occur every day for about 8 to 10 weeks per year, and not the rest of the year.

They also occur at almost the same time every day, and last anywhere between 15 minutes to 3 hours. Cluster headaches have been linked with cigarettes and alcohol.

Oftentimes, individuals with cluster headaches pace around, because there’s nothing that really provides comfort.

Another high yield fact you have to remember for the exams is that they’re usually associated with autonomic symptoms on the affected side, such as ptosis, miosis, lacrimation, and nasal congestion.

For prophylaxis, verapamil, valproic acid, or lithium are effective.

Okay, now let’s go over some of the causes for secondary headaches.

Diagnosing a primary headache is usually based on clinical symptoms alone.

But on the exams and in practice, when an individual presents with a headache, it’s important to think through the secondary causes first to avoid missing something important or life-threatening.

There are some findings that point towards a secondary headache like new or sudden onset of headache, headache that is worsening in severity or frequency, systemic symptoms, such as fever or weight loss, neurological symptoms, like weakness, sensory deficits, or vision loss, and other associated conditions, like history of trauma.

Any of these findings warrant further investigation like brain imaging with a CT scan, or MRI, and in some cases a lumbar puncture. Also, some clinical features may point towards a specific diagnosis!

A high yield cause you’re likely to see on the exams is subarachnoid hemorrhage, that it’s usually caused by rupture of an intracranial aneurysm.

Typically, the headache develops suddenly, and rates 10 out of 10 in terms of pain, right at its onset.

It’s often described as the “the worst headache of my life”.

Meningeal signs, like neck stiffness, are often present. If a person’s recently had a head trauma, epidural or subdural hematomas should be considered.

Now, if someone has a sudden headache after a trauma, and it radiates down one side of the neck, and there’s Horner syndrome, which is unilateral ptosis, miosis, and anhidrosis, then it could be due to a carotid or vertebral artery dissection.