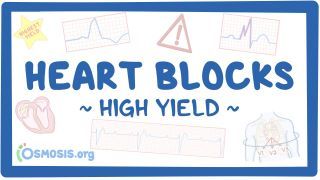 2nd degree AV block has two subtypes: Mobitz 1, and Mobitz 2. In Mobitz 1, each atrial impulse encounters a longer and longer delay until one of them does not make it through to the ventricles.

The high yield concept here is that on the ECG, this is reflected as the PR interval getting progressively longer and longer until all of a sudden, the heart drops a beat.

Like Mobitz 1, the heart also drops a beat in Mobitz 2, except this time, conduction through the AV node is all-or-nothing.

Either the atrial impulse goes through with no delay, or it doesn’t at all.

There is no progressive prolongation of the PR interval in Mobitz 2. On the ECG, Mobitz 2 shows a couple of normal PR intervals followed by a dropped beat.

On the other hand, Mobitz 2 can be dangerous and may result in severe bradycardia and decreased cardiac output.

Therefore it requires treatment with a pacemaker.

Now, Mobitz 2 blocks can sometimes progress to our next type, the dangerous 3rd degree AV block.

In this type, none of the electrical impulses are conducted through the AV node, and that’s why it’s also called complete heart block.

Now remember that all cardiomyocytes are capable of starting their own electrical activity, a property called automaticity.

So in 3rd degree AV block, the ventricles recognize that they’re not getting any impulses, and respond by generating their own electrical rhythm called a ventricular escape rhythm, just to hang on to dear life.

Because the atria and the ventricles each have their own pacemakers, they now contract independent of one another, which is called AV dissociation. This desynchronization of the heart chambers can reduce cardiac output dramatically, leading to syncope or even sudden cardiac death.

On the ECG, the P-waves and QRS complexes have nothing to do with each other, each appearing at their own rates.

Because of how dangerous 3rd degree blocks are, anyone diagnosed with it needs a pacemaker.

Alright, a lot of things can cause the 3 types of AV block.

A myocardial infarction may involve the conduction pathway, causing a delay in electrical conduction.

This is especially common in right coronary artery occlusion because it gives off a small branch that supplies the AV node.

On the exam, a clue towards right coronary artery occlusion would be a case of inferior wall myocardial infarction, indicated by elevation of the ST segments in leads II, III and aVF.

Also, electrolyte disturbances like hyperkalemia can alter the membrane potential.

Then there are external causes like Lyme disease, medications such as beta-blockers, calcium channel blockers, adenosine, amiodarone and digoxin.

For your exams, remember that Lyme disease is typically associated with 3rd degree AV block.

Interestingly, congenital heart block is a complication of neonatal lupus, which could also show up on your exam.