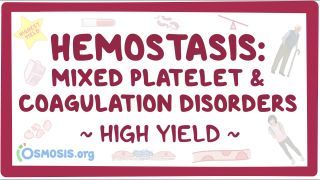 At the emergency department, a 70 year old male named Max is admitted because of high fever with chills, and hypotension.

He complains of having urinary urgency, frequency and dysuria, or painful urination, for the last few days.

A few hours after admission, he rapidly deteriorates and starts to bleed from venipuncture sites.

Urine and blood cultures are ordered and are both positive for gram negative rods.

Both Max and Sylvia are suffering from a hemostasis disorder.

The first includes problems with primary hemostasis, which is the formation of the weak platelet plug, and so, they’re referred to as platelet disorders.

Okay, in this video, we will focus on mixed platelet and coagulation disorders, that include disseminated intravascular coagulation, or DIC, and von Willebrand disease.

Alright, so let’s take a closer look at these disorders, starting with DIC, which is a massive overactivation of the coagulation system including both platelets and clotting factors.

For your exams, it’s important to know that DIC can occur in response to serious conditions including gram negative bacterial sepsis, trauma, and obstetric complications such as abruptio placenta and retained dead fetus in utero, acute pancreatitis, malignancies such as adenocarcinomas and promyelocytic leukemia, nephrotic syndrome, snakebites, and transfusion reactions.

Okay, whatever the cause, there is a release of a procoagulant that tips the scales in favor of clot formation.

Procoagulants could be enzymes that help to proteolytically cleave and activate clotting factors or proteins like bacterial components such as lipopolysaccharide or tissue factor also known as thromboplastin.

For your test, remember that the release of tissue factor from abruptio placenta into the maternal circulation, is, in fact, the most common cause of DIC in pregnancy.

DIC leads to widespread clotting, which can block off small arteries leading to organ ischemia.

These clots also act like jagged rocks in a river and damage the red blood cells floating by, causing microangiopathic hemolytic anemia.

These damaged RBCs can be seen on a blood smear as schistocytes but sometimes they get destroyed completely.

These proteins normally serves as the glue between the platelet receptor Gp1b and the collagen underneath the endothelial cells.

So, for the test remember that if there’s a problem with von Willebrand factor, it’s hard for platelets to adhere to collagen in damaged blood vessels, leading to impaired platelet function.

So without von Willebrand factor, there’s less functioning factor 8 around, leading to decreased activation of the coagulation cascade.

Alright, so mixed platelet and coagulation disorders affect both primary and secondary hemostasis, and as a result they can present with symptoms caused by dysfunctions in both pathways.

In contrast, secondary hemostatic, or coagulation, problems can present with large bruises after minor trauma, like bumping into a door.