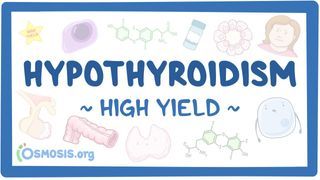 The first one is 23 year old Hannah who complains of lethargy, fatigue, reduced appetite, muscle weakness and constipation.

She also says that lately she gained a bit of weight and has a low libido.

On clinical examination, she has periorbital edema, dry, cool skin, her nails are brittle and her reflexes are slow.

She also has a moderately enlarged, painless goiter.

The other one is 33 year old Quentin, who also presents with lethargy, fatigue, reduced appetite, muscle weakness, constipation and he’s also complaining about feeling cold all the time.

He said that he recently had the flu, but no other illnesses.

Both Hannah and Quentin have high levels of TSH and low T3 and T4 levels, but Hannah has positive antithyroid-peroxidase and antithyroglobulin antibodies.

Both individuals seem to have hypothyroidism.

Only a small amount of T3 and T4 will travel unbound in the blood, and can act upon nearly every type of cell in the body.

Once inside the cell T­4 is usually converted into T3, and it can exert its effect. T3 speeds up the cell’s basal metabolic rate.

Now, hypothyroidism can happen a few different ways, and all of them result in a decrease in thyroid hormones and a decreased basal metabolic rate, where cellular reactions are happening slower than normal.

There are three types of hypothyroidism. In primary hypothyroidism, the thyroid gland is the problem, because it isn’t making enough thyroid hormones.

The stimulated fibroblasts start depositing glycosaminoglycans in the interstitium.

These are sometimes called central hypothyroidism.

A high yield fact for your exam is that they can lead to a decrease in TSH release, which decreases the activity of the thyroid.

Regardless of the cause, symptoms of hypothyroidism are the same and in order to remember them better, keep in mind that hypothyroidism slows down almost everything.

They can take years to manifest and affect multiple systems.

Metabolic findings include modest weight gain, and cold intolerance due to the low basal metabolic rate.

Skin and hair findings include cool skin due to vasoconstriction, dry skin due to reduced secretion of the sweat glands and sebaceous glands.

The hair is coarse and brittle hair and there can be diffuse alopecia and the nails are also brittle.

Hypothyroidism leads to an increase in glycosaminoglycans in the interstitium, which can elevate the osmotic pressure, leading to water retention and eventually non-pitting edema.

As a result, the individual has a puffy appearance, called myxedema.

Sometimes, there can also be muscle damage and in this case, CK levels are increased.

It’s not exactly understood why this happens, but it’s known that thyroid hormones have a great influence on cell metabolism and this includes muscle cell metabolism.

Sometimes, carpal tunnel syndrome can appear and it’s thought that this happens due to the accumulation of glycosaminoglycans.

There can also be myoedema which is a bump caused by local muscle contraction when triggered by light percussion with an object.

The prolonged muscle contraction is a result of the alterations in muscle fibers caused by hypothyroidism.

Reproductive findings include menorrhagia, oligomenorrhea, low libido in females and even infertility. These changes can occur due to deficient LH secretion.

Diagnosing hypothyroidism is done by measuring blood levels of TSH, T3, and T4.

There can also by hypercholesterolemia, due to low LDL receptor expression.

First, there’s Hashimoto thyroiditis, which is the most common cause of primary hypothyroidism in countries that fortify foods with iodine.

This is an autoimmune disorder where T cells and autoantibodies like anti-thyroid peroxidase and thyroglobulin antibodies infiltrate the thyroid, remember these antibodies because this is very high yield!