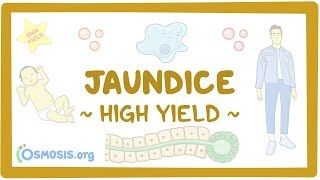 She was born at term following an uncomplicated pregnancy.

The skin is yellow in the face, trunk, and limbs, but there’s no organomegaly.

On the other hand, a 17-year-old boy named Steven comes to his primary care physician because his sister has been telling him that periodically, he look a little yellow.

Medical history is noncontributory, physical examination shows no abnormalities, but Steven mentions that he has recently started working out and dieting to prepare for prom.

A week later, his bilirubin concentration is normal.

Now, both Christine and Steven have jaundice, but the underlying cause of their problem is different.

Jaundice, also called icterus, is the abnormal yellowish pigmentation of the skin, mucous membranes, and sclera due to the deposition of the bilirubin.

Now for your exam, it’s crucial to know the metabolism of bilirubin!

When old red blood cells pass through the spleen, macrophages eat them up and break down the hemoglobin to heme and globin.

Heme is then converted into biliverdin by an enzyme heme oxygenase.

Biliverdin is further converted into unconjugated or indirect bilirubin by an enzyme biliverdin reductase.

Unconjugated bilirubin is the form of bilirubin that’s lipid-soluble.

Since it’s not water soluble, this form of bilirubin binds tightly to albumin in the blood, therefore, it can’t be filtered by the kidneys and excreted in the urine.

Instead, the unconjugated bilirubin undergoes hepatic metabolism of bilirubin, which consists of 3 main phases.

The first phase is carrier-mediated uptake of bilirubin at the sinusoidal membrane of the hepatocyte.

In the second phase two molecules of glucuronic acid are attached to bilirubin by an enzyme UDP glucuronyl transferase.

The final product is bilirubin diglucuronide, which is also known as conjugated or direct bilirubin.

Now, after a fatty meal, cholecystokinin causes contraction of the gallbladder which squeezes out the bile into the biliary duct system and further through the Ampulla of Vater into the duodenum.

On the flip side, 20% of urobilinogen gets reabsorbed into the blood and spontaneously oxidizes into urobilin.

90% of the urobilin is sent back to the liver and 10% of it is excreted by the kidneys and it is responsible for the yellow color of urine.

Unconjugated, or indirect hyperbilirubinemia, is caused by an increased breakdown of hemoglobin, impaired hepatic bilirubin uptake, or defective conjugation of bilirubin.

Increased breakdown of hemoglobin is commonly seen in intravascular hemolytic conditions, such as hemolytic disease of the newborn, sickle cell anemia, and glucose-6-phosphate deficiency.

On the other hand, impaired hepatic bilirubin uptake can be caused by congestive heart failure or some medications such as rifampicin and probenecid.

Finally, defective conjugation of bilirubin can be physiologic, which is also referred to as physiologic jaundice of the newborn; or pathologic, which is commonly seen in hereditary conditions such as Gilbert syndrome and Crigler-Najjar syndrome.

Now, as mentioned before, unconjugated bilirubin is lipid-soluble, meaning it can deposit in many organs of the body, including the brain.

Deposition of unconjugated bilirubin in basal ganglia can cause bilirubin encephalopathy, also known as kernicterus, which is a potentially fatal condition characterized by jaundice and neurological problems.

In addition, these individuals can have an increased concentration of unconjugated bilirubin in bile and this can result in the formation of numerous, small, black pigmented gallstones.

Now, physiologic jaundice of the newborn is extremely common and this is especially the case for preterm infants.

A high yield fact to remember is that it typically manifests within the first 2 days to 1 week of life.

It’s important to note that physiologic jaundice of the newborn is more commonly seen in Asian newborns!

At birth, newborns have a high hematocrit, but their red blood cells have a shorter life.

As a result, when that large number of red blood cells turn over, a lot of unconjugated bilirubin gets released.

To make this problem worse, newborn livers have immature UDP glucuronyl transferase, therefore they are inefficient at conjugating this bilirubin and this eventually leads to unconjugated hyperbilirubinemia.

It’s important to note that sulfonamides and ceftriaxone should not be given to neonates and infants due to their ability to take up bilirubin binding sites on albumin, thereby exacerbating or facilitating jaundice.

Usually, this is a totally benign condition, but kernicterus can occur when large amounts of unconjugated bilirubin starts to deposit within the brain, causing brain damage.

Even though the physiologic jaundice of the newborn typically resolves without treatment in 1-2 weeks, babies that require therapy are usually treated with non-UV phototherapy, which isomerizes unconjugated bilirubin to water-soluble form that can be excreted by the body.

Another type of jaundice that can be seen in healthy newborns is breast milk jaundice or BMJ.

The gut flora is established one to two years after birth, so, when born, babies do not have enough bacteria to convert conjugated bilirubin to urobilinogen, and eventually to stercobilin.

For your exam, you should know that breast milk jaundice develops after the first 5 to 7 days of life and it peaks after 2 weeks.

Breastfeeding failure jaundice typically occurs during the first week of life and it is typically caused by decreased or poor intake of breast milk.

As a result, these babies have inadequate stooling and decreased elimination of bilirubin by stool.

Eventually, this leads to increased enterohepatic circulation, which is further followed by unconjugated hyperbilirubinemia, and jaundice.

Also, it’s important to mention that breastfeeding failure jaundice is associated with clinical features such as suboptimal breastfeeding, mild dehydration, and weight loss in the first few days of life.

Finally, the treatment of breastfeeding jaundice includes prevention of dehydration and increased frequency and duration of feeds, which promote excretion of bilirubin.

Gilbert syndrome is a relatively common, benign, genetic condition that is associated with an impaired hepatic bilirubin uptake and reduced production of enzyme UDP glucuronyl transferase.

In other words, these hepatocytes are less effective at conjugating bilirubin and this can result in unconjugated hyperbilirubinemia.

A high yield fact is that individuals with Gilbert syndrome are typically asymptomatic; but they can also present with mild jaundice.

This usually occurs in response to one of the classic triggers, which include fasting, febrile illness, fatigue, stress, physical exertion, all of which induce mild hemolysis.

Therefore, you should think of Gilbert syndrome in a person who presents with mild jaundice, no apparent liver disease, and normal liver function tests.

On the other hand, Crigler-Najjar syndrome type 1 is characterized by the absence of UDP glucuronyl transferase; therefore individuals with this syndrome can’t conjugate bilirubin at all!

Ultimately, this leads to unconjugated hyperbilirubinemia with a very high total bilirubin that can range from 20 mg/dl up to 50 mg/dl.

For your exam, you have to know that symptoms typically occur soon after birth and these infants present with persistent neonatal jaundice and even kernicterus.

On rare occasions, they can even develop neurological problems later in life.

As far as the treatment goes, individuals with Crigler-Najjar syndrome type 1 are treated with plasmapheresis and phototherapy.

It’s important to note that phototherapy does not conjugate bilirubin molecules, instead, it works by increasing polarity and water solubility of unconjugated bilirubin.

But since this condition is associated with a fatal outcome, the only curative treatment for individuals with this type of Crigler-Najjar syndrome is liver transplantation.

On the flip side, Crigler-Najjar syndrome type 2 is the less severe form and it is associated with reduced activity of the UDP glucuronyl transferase enzyme.

As a result, these individuals develop unconjugated hyperbilirubinemia with total bilirubin that is usually below 20mg/dl.

Prognosis is good since people with this type have a good response to treatment with phenobarbital, which induces the synthesis of liver enzymes.

Now, let’s move on to conjugated, or direct hyperbilirubinemia, which is commonly associated with pruritus, or itchiness.

Furthermore, you have to know that pruritus occurs due to increased plasma bile acids that builds up in tissues.

Now, conjugated hyperbilirubinemia can be caused by decreased excretion of bilirubin, some biliary tract conditions, and biliary tract obstructions.

Decreased excretion of bilirubin is commonly seen in hereditary conditions such as Dubin-Johnson syndrome and Rotor syndrome.

Dubin-Johnson syndrome is a benign, rare, genetic condition that is characterized by the absence of a biliary transport protein found on the canalicular membrane of the hepatocyte.

As a result less conjugated bilirubin is transported out of the hepatocyte into bile canaliculi.

Eventually, this leads to conjugated hyperbilirubinemia with total bilirubin levels between 2 and 5 mg/dl.

But, it’s important to note that these individuals can also present with normal or extremely elevated levels of bilirubin that can range between 20 and 25 mg/dl.

For your exam, you have to know that most individuals are asymptomatic, while some have nonspecific symptoms such as fatigue, abdominal pain, and weakness.

In some cases, individuals present with mild jaundice, that’s usually noted during illnesses, pregnancy or after using certain medications, like oral contraceptives.

You should think of this syndrome in individuals who have elevated total bilirubin with a conjugated bilirubin fraction of at least 50%; and normal liver function tests.