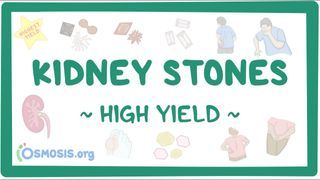 In the Emergency Department, two people with similar symptoms came in.

An electrolyte panel and urinalysis was done in both individuals.

Results showed that Conrad had normal levels of calcium in the blood, but urinalysis showed hypercalciuria and hematuria.

Now, the suspicion is that both individuals have kidney stones, but there are actually several types of kidney stones and we need to know what we’re dealing with in order to give the right treatment.

Urine’s a combination of water, which acts as a solvent, and all sorts of particles, or solutes.

This means that dehydration leads to a low urine volume which can further put a person at risk for kidney stones.

Okay, let’s now talk about the different types of stones.

There are four main types of stones.

Finally, a super rare type of stone is a cysteine stone.

With calcium stones, in most cases, the inorganic precipitate is calcium oxalate, formed by a positively charged calcium ion binding to a negatively charged oxalate ion, which results in a black or dark brown colored stone that’s shaped like an envelope or a dumbbell.

Calcium oxalate stones appear radiopaque on X-ray, as well as on a CT-scan.

Now, there are some risk factors for developing calcium stones, such as idiopathic hypercalciuria or hypercalcemia.

Another very important risk factor is hypocitraturia, which means that less citrate is eliminated in the urine.

This is because normally, citrate prevents stone formation by inhibiting crystal growth and aggregation.

Other risk factors include fat malabsorption, which can happen with Crohn’s disease or in individuals that have had a gastric bypass operation.

Thiazides inhibit the sodium-chloride transporter in the distal convoluted tubule, meaning that more sodium and chloride get in the urine.

Okay, the distal convoluted tubule also has a calcium channel which allows calcium from the lumen to diffuse into the cell.

Once in the cell, calcium is transported out into the interstitium through a sodium-calcium exchanger, that pumps a sodium in, and a calcium out.

Now, since thiazides decrease sodium reabsorption, there’s less sodium in the cell, so the sodium-calcium exchanger works overtime to pump more sodium in, and more calcium out.

The decrease in intracellular calcium, in turn, leads to more calcium reabsorption from the urine. Another treatment is giving potassium citrate which binds to the calcium in urine, preventing reabsorption.

That’s because when a person has a high sodium diet, more water is retained.

This means that the extracellular volume expands.

Since there’s so much water and sodium, the renin-angiotensin-aldosterone system has nothing to respond to, so its activity is dialed down.

This means that not that much sodium will be reabsorbed in the proximal convoluted tubule.

These are dirty white in color and shaped like a wedge prism which appears radiopaque on a X-ray.

A risk factor is highly alkaline urine which could be caused by renal tubular acidosis where there’s a decreased secretion of hydrogen or increased secretion of bicarbonate into the urine. Treatment includes a low-sodium diet, as well as thiazide diuretics.

Another type are struvite stones, sometimes called infection stones, which are a composite mix of magnesium, ammonium, and phosphate.

Since they are infections stones, this means that the individual can present with signs of a urinary tract infection, like dysuria.

For your tests, remember that these form when there’s an overabundance of urease-positive bugs like Proteus mirabilis, Staphylococcus saprophyticus, and Klebsiella species.

They use the enzyme urease to split urea into ammonia and carbon dioxide.

The ammonia makes the urine more alkaline and favors precipitation of magnesium, ammonium, and phosphate into jagged crystals called “staghorn” because they often branch into the several of the renal calyces and look like the horns of a staghorn deer.

On an X-ray or on a CT-scan, such stones are radiopaque,, but are less dense than calcium stones.