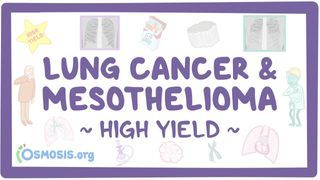 Two people came to the clinic one day.

First is a 65-year-old named Alex, who presents with a two-month history of dry, persistent cough and weight loss of around 7 pounds without dieting.

He also says he coughs up blood sometimes but denies fever, dyspnea, sore throat, rhinorrhea or any chest pain.

Alex has a history of asthma and hypertension, and smoked 1 pack of cigarettes daily for 45 years.

On examination, his breath sounds are diminished at the right lung base.

The other individual is Clara, who’s an 80-year-old retiree.

Before her retirement, Clara was a construction site supervisor.

She complains of increasing shortness of breath, which started ten months ago, and new onset of myalgia located on the right side of her chest.

Physical examination reveals decreased breath sounds in the right lung base along with dullness to percussion.

Chest X-rays were ordered for both people.

In Alex’s case, it showed a single, coin-like lesion on the right lung base.

Both people have cancer involving the lung.

Lining the airways are several types of epithelial cells that serve multiple functions.

There are also basal cells that are thought to be able to differentiate into other cells in the epithelium, club cells that act to protect the bronchiolar epithelium, and neuroendocrine cells that secrete hormones into the blood.

On the outside, the lungs are covered by the mesothelium which consists of the parietal pleura and the visceral pleura.

Between them, there’s the pleural space, where the fluid produced by the epithelial cells is released, which acts as a lubricant to allow the layers to slide effortlessly against each other during respiratory movements.

Cells of the lungs can undergo mutations that cause them to divide uncontrollably and replace the normal healthy lung tissue.

Eventually these cells will form a tumor.

To supply it, new blood vessels also develop and this is called angiogenesis.

Sometimes the tumor can metastasize and spread via blood vessels or lymphatics and establish secondary sites throughout the body.

Particularly at risk for lung cancer metastasis are the mediastinum and hilar lymph nodes because of their proximity to the lungs, so remember this as it’s very high yield!

Other common sites include the liver, adrenal glands, bones, and brain.

There are many risk factors for lung cancer.

Tobacco smoking is the most important one, which accounts for more than 90% of cases of lung cancer.

This usually comes in the form of cigarettes, but also includes cigars, pipes, and hookah.

There is a dose-dependent linear relationship between lung cancer risk and pack-years, which is the number of cigarette packs per day times the number of years of smoking.

The second leading risk factor for lung cancer is exposure to radon, a colorless, odorless gas which is a natural breakdown product of uranium found in the soil, so it sometimes accumulate in basements.

Other environmental factors include asbestos, a mineral made of long, fibrous crystals that was commonly used for construction until the 1980s in the US.

The most common type of cancer caused by asbestos is adenocarcinoma.

Next there’s air pollution and ionizing radiation from medical imaging with chest X rays and CT scans, or during radiation therapy.

Initially, individuals may be completely asymptomatic.

Over time, in response to the cancer, the body mounts an immune response to fight it off.

This results in the release of inflammatory chemokines like TNF-alpha, IL1-beta, and IL-6.

If the primary tumor physically obstructs the airway and presses on surrounding tissue, it can cause coughing, shortness of breath, wheezing.

Since the obstruction can decrease the clearance of mucus, it also increase the risk of developing pneumonia.

Sometimes, the tumor obstructs the bronchus and prevents the ventilation for a lobe, or even an entire lung!

This will cause obstruction atelectasis where the lung could collapse.

Another high yield fact is that compression of nearby vessels, like the superior vena cava, can prevent blood from draining from the head, leading to facial swelling or puffiness.

If the swelling occurs in the epiglottis, it could cause difficulty breathing and if there’s swelling in the brain, it could cause headaches and altered mental status; both of which can be medical emergencies!

A high yield fact is that sometimes a tumor, can arise in the superior sulcus, which is the space formed by the subclavian vessels, and these are called Pancoast tumors.

These are most often non-small cell carcinomas and can compress the blood vessels and nerves located in the region.

Some important symptoms to remember include arm muscle weakness and paresthesia due to compression of the brachial plexus, and pain that irradiates to the scapula and arm on the affected side.

Since Pancoast tumors near the thoracic inlet can compress cervical sympathetic ganglia, it can lead to Horner syndrome which causes constricted pupil, drooping upper eyelid, which is called ptosis, and anhidrosis, or the inability to sweat.

They are associated with amplification of the Myc oncogene and originate from small, ovoidal, neuroendocrine cells.

These tumors usually develop centrally in the lung, near a main bronchus.

They also grow the fastest and tend to rapidly metastasize to other organs when compared to non-small cell lung cancers.

Small cell carcinomas can sometimes secrete hormones and that can lead to what is called a paraneoplastic syndrome.

One example is they can releases adrenocorticotropic hormone or ACTH.

This leads to bilateral adrenal enlargement and an increase in cortisol production.

Next, these tumors can also release antidiuretic hormone.

This is called syndrome of inappropriate antidiuretic hormone or SIADH, which increases water reabsorption in the renal collecting ducts, leading to high blood pressure, hyponatremia, edema, and concentrated urine.

Finally, small cell carcinoma can trigger the production of autoantibodies against neurons.

If cerebellar neurons are affected, it leads to symptoms like ataxia and nystagmus.

There’s also Lambert-Eaton syndrome where the autoantibodies target voltage gated calcium channels on the presynaptic membrane at the neuromuscular junction.

This condition results in muscle weakness, especially the proximal muscles in the legs, but it also causes double vision, drooping of the eyelids, and difficulty swallowing.

The other type is non-small cell carcinomas.