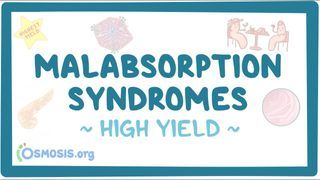 At the gastroenterology clinic, there is a 53 year- old man from the United Kingdom, named George, who came in complaining of periodic foul-smelling, bulky and frothy stools, as well as recurrent abdominal pain after meals and weight loss, despite not dieting.

On further history, he admits that he has been consuming alcohol with almost every meal for the last 10 years.

An upright abdominal x-ray shows calcifications in the epigastric area.

Next to him is a 9 year- old girl from Iran, named Yasmin, whose parents are concerned about her short stature and inadequate weight gain despite following a balanced diet.

On examination, her height and weight are below the 3rd percentile for her age and sex.

She also has an itchy rash consisting of small vesicles on both of her knees.

At first glance, you’d think George’s and Yasmin symptoms have nothing in common.

But the fact is, they both have different forms of malabsorption syndromes.

In general, unabsorbed nutrients are allowed to linger in the gastrointestinal lumen for longer than usual, disrupting the proper formation of stool, which results in diarrhea, bloating and flatulence.

And since these nutrients are lost in the stool, malabsorption will also lead to unintentional weight loss and various nutritional deficiencies.

And it’s important to know that screening for fat malabsorption is done with a fecal fat test, known as Sudan III stain.

A high yield fact to remember is that there will also be a decrease in the absorption of the fat-soluble vitamins; A, D, E, and K, and that might be the only clue you get for fat malabsorption!

So, in a question stem with symptoms like night blindness, eye dryness, corneal ulcerations or thickened skin, think of vitamin A deficiency.

In a child with rickets or an adult with osteomalacia there’s vitamin D deficiency.

And finally, increased bleeding tendency should be a clue for vitamin K deficiency.

Okay, next, if there’s protein or carbohydrate malabsorption, these nutrients will attract water into the lumen, resulting in a typically watery diarrhea.

But what sets them apart is that protein loss can also cause edema since there’s less oncotic pressure in the blood vessels and the fluid leaks out.

Besides the fat soluble vitamins we discussed earlier, malabsorption of iron can lead to microcytic anemia, with a mean corpuscular volume or MCV less than 80 femtoliter.

Likewise, malabsorption of folate or B12 can lead to macrocytic anemia, with an MCV above 100 femtoliter.

Alright, causes of malabsorption can be broadly divided into two major groups: digestive disorders where the food can’t be broken down in the intestinal lumen, and absorption defects, where intestinal tissue can’t take in the nutrients.

In exocrine pancreatic insufficiency, there’s a lack of pancreatic digestive enzymes, like amylase, lipase and elastase, which breaks down carbohydrates, lipids and proteins respectively.

Now exocrine pancreatic insufficiency typically results from chronic pancreatitis, which is inflammation of the pancreas leading to destruction of its exocrine portion.

For your exams, a person with chronic pancreatitis often complains of intense abdominal pain in the epigastric region, that sometimes radiates to the back and usually presents after meals.

In acute pancreatitis, pancreatic enzymes like lipase and amylase can leak out from the damaged tissue and enter the circulation.

However, in chronic pancreatitis there might not be enough healthy pancreatic tissue left to make these enzymes, so their serum levels remain low.

Now, remember that in adults, the greatest risk factor for chronic pancreatitis is alcohol abuse.

That’s because alcohol makes pancreatic juices really viscous and thick, it forms a plug that can block the duct.

This causes the pancreatic juices to back up, and the digestive enzymes actually start eating away at the pancreas itself.

A high yield fact here is that calcium deposits often accumulate on these plugs, and these calcifications are often visible in imaging tests, like an abdominal x- ray or CT- scan,

Now, if you see chronic pancreatitis in a child, remember that the number one cause is cystic fibrosis.

This is a genetic disorder that causes a mutation in Cl- channels, leading to thick and sticky pancreatic secretions, much like in alcohol abuse.

These children will also develop thick lung secretions, so there will be serious or recurrent pneumonias, as well as nasal polyps which are tissue growths in the nose, and digital clubbing where the fingernails begin to spoon around the fingertips, or infertility in males.

Diagnosis of cystic fibrosis is typically based on high levels of chloride in a sweat test.

Okay, ultimately, regardless of the cause of chronic pancreatitis, the damage to the pancreatic tissue gradually leads to pancreatic insufficiency.

This is based on low serum trypsinogen level, which is another pancreatic enzyme, or low bicarbonate in the duodenal fluid after stimulation with the hormone secretin.

Nextup, digestion could be affected by cholestasis, which is another name for impaired bile flow.

Since bile builds up in the liver, on histology it looks like yellowish-green “bile lakes”.

The blockage results in not enough bile reaching the intestine to emulsify fats and make them easier to absorb.

So, prolonged cholestasis can result in fat malabsorption, which translates to steatorrhea and fat-soluble vitamin deficiencies.

In both cases, conjugated bilirubin doesn't get secreted into gastrointestinal tract, where it would have turned into stercobilin, which normally gives the stool its darker color.

This results in clay colored stool.

Instead, bilirubin builds up in the blood and deposits in the skin and sclera, causing them to turn yellow.

Furthermore, it will get excreted in the urine, turning it dark.

Now, for hepatocellular cholestasis, a really important culprit is the hormone estrogen, which inhibits the export pump that usually move bile acid from the hepatocytes to the biliary tract.

So clues include pregnancy or oral contraceptive pills.

Obstructive cholestasis could be caused from primary sclerosing cholangitis, where the immune system attacks the bile ducts, causing inflammation and scarring and blocking bile flow.

For your exams, it’s important that for unknown reasons, primary sclerosing cholangitis is strongly associated with inflammatory bowel disease, and especially ulcerative colitis.

Also, in a magnetic resonance cholangiopancreatography, or MRCP, which is a technique that uses a magnetic field to visualize the biliary ducts, these ducts appear beaded or have a “pruned tree” appearance with multiple strictures.

Next, carcinomas on the head of the pancreas may also obstruct bile flow, since the common bile duct passes through this region.

For your test, an individual with pancreatic cancer will typically complain of persistent epigastric abdominal pain and on labs, might have elevated serum lipase or CA 19.9 levels.

Imaging tests, like an abdominal ultrasound or CT- scan, will reveal the mass in the pancreas.