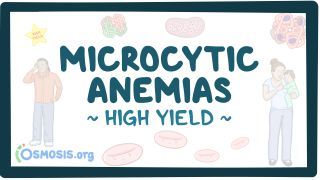 At the family medicine center, there is a 60-year-old Indigenous American named Istu who came to visit the doctor because of his progressive fatigue and difficulty in swallowing.

Next to him, there is a mother from Greece with her child, Thalia, who is 10 months old.

Little Thalia appeared healthy at birth but in the past 2 months, her mother noticed that her face was often pale, she’s been less active, and there was a mass in her belly.

Both Istu and Thalia are suffering from anemia, which is defined as lower than average levels of hemoglobin, typically below 13.5 g/dL in adult men and below 12.0 g/dL in adult women.

Now, anemias can be broadly grouped into 3 categories based on mean corpuscular volume, or MCV, which reflects the volume of a Red blood cell or RBC.

Now, let’s focus on the microcytic anemias, and the most common causes are iron deficiency anemia, lead poisoning, sideroblastic anemia, and thalassemias.

Although microcytic anemia can also present in anemia of chronic disease, which is caused by inflammatory conditions like rheumatoid arthritis, and systemic lupus erythematosus or SLE, it’s usually classified as normocytic anemia.

Normally, RBCs are loaded with millions of copies of a protein called hemoglobin.

Hemoglobin is actually made up of four peptide, or globin, chains, each bound to a heme group.

Those 4 heme molecules have, right in the middle, iron, which binds to oxygen and allows it to move in our body.

Okay, so let’s look at iron deficiency anemia which could be caused by decreased intake, decreased absorption, increased demand, or increased loss of iron.

For your exams, it’s important to know that the clues to help you identify this disorder are often based on the patient’s history.

A high yield fact is that the most common cause of iron deficiency is chronic blood loss.

This includes women with heavy menstruation or people with bleeding gastric ulcers, and, most importantly, elderly males with colon cancer that can bleed.

Another cause of iron deficiency is decreased absorption.

The duodenal cells are normally responsible for the absorption of iron which is present in two forms in our diet, the heme iron and the non-heme iron.

So the stomach’s hydrochloric acid activates a group of enzymes in the duodenal cells, collectively called ferri-reductase, which reduce Fe3+ to Fe2+.

Okay, so decreased iron absorption can occur with inflammation and destruction of duodenal cells like in inflammatory bowel disease or celiac disease, or with decreased stomach acid production, like after a gastrectomy, where a part of the stomach is removed.

So whatever the cause, we end up with a decrease in the body’s iron stores, leading to decreased heme synthesis.

And normally, there’s a low level of free erythrocyte protoporphyrin, or FEP, in red blood cells since this is a precursor to heme.

So when there’s a defect in heme synthesis, these precursors build up and it’s a good indicator for iron deficiency.

The peripheral blood smear shows RBCs that are microcytic, since there’s not enough hemoglobin for a normal sized RBC, and the bone marrow starts pumping out smaller cells.

They are also hypochromic since they contain less hemoglobin and look more pale.

Okay, another high yield fact is that the red blood cell distribution width, or RDW, is high.

This is because we get a mix of normal sized cells from before the iron deficiency and newly produced microcytic cells.

It’s important to remember that lead also inhibits rRNA degradation, causing old rRNA to accumulate inside the RBCs, forming tiny aggregates that are dispersed throughout the cytoplasm and this is referred to as stippling.

Once again, this affects heme synthesis, so free erythrocyte protoporphyrin, or FEP builds up.

On a peripheral blood smear, these aggregates stain blue, so they are basophilic, and we call this basophilic stippling, and this is another high yield fact!

Now, just like iron deficiency anemia there’s a decrease in hemoglobin synthesis so we get microcytic and hypochromic RBCs.

The RDW is high, because we also get a mix of normal sized cells produced before the lead poisoning and newly produced microcytic cells.

Next up is sideroblastic anemia, where sidero means iron, and refers to iron accumulation in the mitochondria, and blast refers to the nucleated precursors of RBCs called erythroblasts.

Sideroblastic anemia can be genetic or acquired. X-linked defect in ALA synthase gene is a genetic cause.

ALA synthase normally catalyzes the first reaction in the heme biosynthetic pathway, and a defect in this enzyme prevents iron from being incorporated into heme and they build up in the mitochondria.

The acquired causes include pyridoxine or vitamin B6 deficiency, since ALA synthase uses vitamin B6 as a cofactor.

For your exams, vitamin B6 deficiency commonly occurs as a result of isoniazid, which binds and inactivates vitamin B6.

Myelodysplastic syndrome is an acquired cause of sideroblastic anemia where the blood forming cells in the bone marrow do not mature normally and become dysplastic.

It’s important to know that this increases the risk of developing hematological malignancies like acute myeloid leukemia.

Other acquired causes include chronic alcohol use, lead poisoning, vitamin B6 deficiency, copper deficiency, and drugs like isoniazid, and chloramphenicol.

Remember for your test that these are reversible causes.

On a peripheral blood smear, we get microcytic hypochromic RBCs and basophilic stippling, so it’s similar to lead poisoning.

However, a high yield fact is that the specific test to use is the prussian blue stain which shows the lead laden mitochondrias forming a ring around the nucleus, giving the classic ringed sideroblast appearance.

Finally, the RDW is high as we get a mix of normal sized cells and newly produced microcytic cells.

Okay, moving on to thalassemias, where there’s a deficiency or absence in the production of the globin chains of hemoglobin.

Hemoglobin A, or HbA, made up of two α-globin and two β-globin peptide chains, makes up approximately 97% of the total hemoglobin in adults.

Hemoglobin A2, or HbA2, which is made up of two α-globin and two δ-globin chains makes up approximately 2.5% of total hemoglobin.

Now, hemoglobin F, or HbF, made up of two α-globin and two γ-globin peptide chains, is the primary haemoglobin of the fetus, but makes up less than 1% in adults.

If three alpha genes are defective it is Hemoglobin H disease, or HbH, with moderate to severe microcytic hypochromic anemia.

Now, when β-globin chain is underproduced, we have β-thalassemia minor, which is usually asymptomatic.