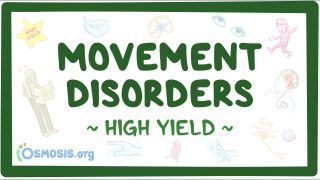 In the neurology ward, there’s a mother with her child, named Justin, who is 2 years old.

Justin’s mother is worried because she palpated a mass in his abdomen while bathing him.

Justin also has been having episodes of rapid, dancing eye movements as well as shocklike, jerky movements of his extremities.

For the past few months, Oliver has been acting strangely according to his sister.

He forgets important information and is very aggressive with his family.

He also has bursts of wild, dance-like movements of his arms.

His sister is very anxious because their father died at age 50 after having similar symptoms.

His wife has noticed that her husband’s face has become inexpressive and he has been having hand tremor at rest for the past few months.

Also, his movements have become slower, and he had frequent falls.

Okay, so all of them have movement disorders.

Alright, when it comes to hypokinetic disorders, a lot of their symptoms are grouped together under the term “parkinsonism.”

This can appear in many conditions including Parkinson’s disease itself, and other syndromes called “parkinson-plus” syndromes.

These cause parkinsonism, plus other clinical features.

Okay, the four cardinal symptoms of parkinsonism can be remembered with the mnemonic “TRAP”. “T” for tremor, which is classically described as a resting, pill-rolling tremor, because it looks like someone is rolling a pill between their thumb and index finger. “R” stands for rigidity, which is often described as a cogwheel-like rigidity.

This means that when attempting to passively move a limb, there are a series of stops or stalls, kind of like a cog on a wheel.

There’s also lead-pipe rigidity, which is when a limb is rigid throughout the entire passive movement, kind of like trying to move a lead-pipe.

This can manifest as a narrow-based shuffling gait or a decreased facial expression, almost to the point where the individual’s face looks like they’re wearing a mask.

“P” stands for postural instability, which causes a stooped posture, problems with balance, and an increased frequency of falls.

Usually, these symptoms are asymmetric, with the exception of medication-induced parkinsonism, which usually causes symmetric symptoms.

Parkinson’s derives from the loss of dopamine-producing, or dopaminergic, neurons in the substantia nigra, which is a part of the basal ganglia.

The substantia nigra can be split into two sub-regions, the pars reticulata, and the pars compacta.

In Parkinson’s the pigmented dopaminergic neurons in the pars compacta gradually disappear and this depigmented region can be seen in an autopsy.

There’s also degeneration in the nigrostriatal pathway which decreases its projections to the cortex, thus causing bradykinesia.

Alright, now normally within the basal ganglia there’s a balance between dopamine, which promotes movement, and acetylcholine, which inhibits movement.

In Parkinson’s disease, the loss of dopaminergic neurons, results in less movement, as well as difficulties in speech and swallowing.

In fact, a common complication in Parkinson’s disease is aspiration pneumonia.

Interestingly, seborrheic dermatitis, an oily skin rash that appears on the scalp, face, chest and axilla has also been associated with Parkinson’s disease.

For treatment, the motor symptoms can be managed by using monoamine oxidase type B inhibitors, amantadine, dopamine agonists, or levodopa.

If these medications don’t work, deep brain stimulation is also an option.

Psychosis should be managed with a second generation antipsychotic like clozapine since first generation drugs often worsen the motor symptoms.

Alright, now onto the “parkinson-plus” syndromes.

First up is Lewy body dementia, which is distinct from dementia secondary to Parkinson’s disease in that the onset of dementia and motor symptoms are less than one year apart.

Finally, in individuals predisposed to strokes, multiple small vessel infarcts in the basal ganglia may cause a form of parkinsonism called vascular parkinsonism.

But parkinsonism can also be caused by medications that block dopamine receptors, including typical, or first generation antipsychotics like haloperidol, which blocks dopamine receptors, and metoclopramide, a dopamine antagonist sometimes used to treat vomiting.

This is why these drugs should be avoided in people with parkinsonism.

Now, in rare cases, Parkinsonian symptoms may be caused by MPTP, a toxic impurity that can be found in the recreational drug MPPP, or desmethylprodine, which is a synthetic opioid.

Once inside the brain, MPTP is metabolized to the toxic form of MPP+ that can cause damage to the substantia nigra, resulting in parkinsonism.

First up is tremor, which is an involuntary, rhythmic movement of a body part, and is the most common movement disorder.

Tremors can be classified into resting and action tremors.

Kinetic tremors are simple if they occur uniformly throughout a voluntary movement, intentional, if it worsens as the affected body part approaches the target, and task-specific, if it occurs during a specific task, like writing.

One very specific type of tremor is called a flapping tremor, or asterixis, and it’s induced when a person fully extends their wrists, which will cause the wrist to flap, like a bird flapping its wings.

A specific and extremely common tremor disorder is essential tremor.

It’s thought to be inherited in an autosomal dominant way, although there can be incomplete penetrance, meaning that some affected individuals may not develop all of the features.

Individuals with essential tremor usually develop a unilateral or bilateral postural and kinetic tremor in their arms, face, and head, including the vocal cords, leading to problems with speaking.

The tremor is often worsened by caffeine, emotional distress, and hunger, while alcohol can relieve the tremor.

Dystonias can occur due to dysfunction of the basal ganglia and can be classified into focal dystonias, involving only a specific muscle group or generalized dystonias, which involve multiple muscle groups.

Examples of focal dystonias include blepharospasm, which is a spasm of the eyelid muscles, causing an increased frequency of blinking.

Another example is cervical dystonia involving the sternocleidomastoid muscle and causing the neck to deviate to one side, and causing torticollis.

Limb dystonias are often brought on by specific tasks, for example writing can cause a “writer’s cramp”, or golfing can cause what’s called “the yips” where the golfer makes sudden involuntary jerks, messing up their putting.

An effective treatment for dystonia is botulinum toxin.

When they occur together, they’re described as choreoathetosis.

Chorea can be seen in Huntington disease, which is a disease frequently tested on the exams!

So, Huntington’s disease is an autosomal dominant neurodegenerative disorder that typically affects individuals around 40 years of age.

It is caused by a mutation in the Huntington disease, or HD, gene on chromosome 4.

This gene contains a trinucleotide repeat of CAG sequences, which encode for the amino acid glutamine,

The gene encodes for a protein called huntingtin.