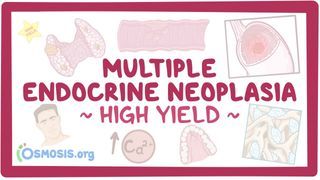 Two individuals came in for genetic testing based on recommendations from their primary care physicians.

The first one is 24 year old Kurt, who was previously diagnosed with Zollinger-Ellison syndrome and also has an adenoma in one of his parathyroid glands.

On the clinical examination, doctors observed that he has gynecomastia.

His mother also has parathyroid adenomas.

The other one is 19 year old Courtney, who was previously diagnosed with parathyroid hyperplasia and pheochromocytoma.

Her father has recently been diagnosed with thyroid medullary cancer.

Although their presentation and family history differ, both people have multiple endocrine neoplasias, or MEN for short.

These are a group of inherited diseases which cause tumors to grow in the endocrine glands of the body.

So in multiple endocrine neoplasias, there are tumors that form in these glands that lead to overproduction of hormones.

Multiple endocrine neoplasias are caused by genetic mutations in one of two genes: either MEN1 or RET, which codes for receptor tyrosine kinase.

For your exams, remember that both of these genes have a dominant inheritance pattern, so only one copy of the mutated gene is needed to get the disease.

Okay, let’s start with the MEN1 gene that is found on chromosome 11 and codes for a tumor suppressor protein called menin, which - under normal circumstances - stops a cell from dividing uncontrollably.

For your tests, you absolutely have to know that there are three types of tumors associated with MEN type 1: parathyroid, pancreatic, and pituitary.

The most common tumor is a parathyroid adenoma. Increased parathyroid hormone production causes increased bone breakdown, which leads to hypercalcemia.

The clinical manifestations of hypercalcemia can be recalled by the mnemonic: “Stones, bones, groans, and moans”.

Bones refers to bone pain that results from the increased resorption of bone in hyperparathyroidism.

Lastly, moans refers to the psychiatric symptoms of hypercalcemia, such as altered mental status and psychosis.

The first one is Zollinger-Ellison syndrome, where there’s one or more tiny tumors in the pancreas or the upper part of the small intestine.

These tumors, called gastrinomas, produce gastrin which increases the amount of hydrochloric acid in the stomach and can cause peptic ulcers, abdominal pain, and vomiting.

Insulinomas cause hypoglycemia, which is suggested by the Whipple’s triad.

This includes symptoms of hypoglycemia such as hunger or dizziness, low glucose levels at the time of the symptoms, and finally, relief of symptoms when glucose is given.

Sometimes, the tumor is a vipomas which secretes vasointestinal active peptide and leads to watery diarrhea which can lead to dehydration, metabolic acidosis, and hypokalemia.

The pituitary gland develops benign tumors called adenomas which usually make an excess amount of at least one of the many hormones produced there.

Most commonly, there’s excess prolactin, which causes galactorrhea, or milk production in women who are not breast-feeding; and gynecomastia in men, which is excessive breast tissue growth.

The next most common hormone being overproduced is growth hormone, which has different effects depending on the age.

In adults, growth hormone causes acromegaly where they have enlarged hands and feet, a large forehead, and a prominent jaw.

Sometimes, with MEN type 1, there can also be facial angiofibromas, which are benign tumors that consist of blood vessels and connective tissue.

They appear as small, reddish papules that don’t regress.

Next, there can also be collagenomas, which are caused by the proliferation of normal collagen fibers.

They are also benign and appear like multiple, skin-colored or hypopigmented nodules on the face, neck, trunk and upper limbs.