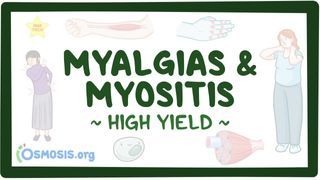 On your rounds, you see two individuals.

First is Yu Yan, a 58-year-old female who presents with a 2-week history of fatigue, weight loss, fevers, and bilateral pain with stiffness in the shoulder and hip girdles.

These symptoms are worse at night and last for more than an hour.

She also mentions that she finds it hard to get out of bed in the morning due to stiffness.

On examination, her wrists and finger joints are painful and swollen, but there’s no muscle weakness.

Then you see Elizabeth, a 38-year-old female who has a 4-year history of body pain.

The pain was initially limited to her neck, but it has gradually spread and she now complains of constant pain all over.

She does not sleep well and is chronically fatigued.

Examination revealed many tender points throughout her body but no sign of joint swelling or muscle weakness.

Blood tests were performed in both. In Yu Yan’s case, there was an increase in inflammatory markers, but creatine kinase levels were normal.

Both people have myalgias, or muscle pain.

There are many causes but let’s start with myopathies, which are neuromuscular disorders in which the primary symptom is muscle weakness due to muscle cell dysfunction.

There are two main inflammatory myopathies, polymyositis and dermatomyositis.

First, polymyositis is an autoimmune disease where there’s inflammatory infiltration in striated muscles that cause muscle damage.

Now, the cause is still unknown, but polymyositis is often associated with other autoimmune diseases, including Sjogren syndrome, rheumatoid arthritis, scleroderma, and mixed connective tissue disease.

It is thought that there’s an overexpression MHC class I molecules and muscular autoantigens, which end up triggering a primarily cell-mediated immune response that inappropriately activates CD4+ and CD8+ T-cells.

This is probably due to molecular mimicry, which is when an immune cell mistakes a protein in the body as being foreign due to their similar structure.

Sometimes, humoral immunity can also kick in when B-cells get activated by the autoantigens and make antibodies against them.

These include histidyl-tRNA synthetases, also called Jo-1; a helicase protein known as Mi-2; and components of the signal-recognition particle, or SRP for short, which helps with protein trafficking within the cell.

The bottom line is that these two immune reactions result in inflammation in and around the muscles that are being attacked, attacks which occur repeatedly over time, and can involve different muscle groups.

Symptoms of polymyositis include progressive and bilateral weakness and muscle wasting.

Weakness usually develops slowly over weeks to months, and its intensity can vary from mild to near paralysis.

Sometimes, the affected muscles can be tender or painful due to inflammation.

Now, the disease mostly affects proximal, big muscle groups, like the shoulder or hips and it usually spares distal muscles like those in the hands and feet.

As a result, individuals might have difficulties doing things like getting up, lifting their arms, and climbing stairs.

In this case, you should know that Gowers sign might be present, which is when people use their arms to help them stand up from a squatting position or when getting up from a chair.

Classically, this is a sign of Duchenne muscular dystrophy but it can also be seen in inflammatory myopathies including polymyositis and dermatomyositis.

When the muscles of the pharynx or esophagus are involved, it causes dysphagia or difficulty in swallowing.

Sometimes, the diaphragm and intercostal muscles can be weakened, which causes difficulty breathing and this is made worse because inflammatory myositis is often accompanied by interstitial lung disease where the parenchyma of the lungs undergo fibrosis and scarring.

Although this is usually asymptomatic, it can result in conduction disturbances, myocarditis, or congestive heart failure.

Diagnosis is based on identifying a variety of serum autoantibodies, such as anti-nuclear antibodies and myositis-specific antibodies, like anti-Jo-1, anti-Mi-2, and anti-SRP.

Next, remember there’s elevated serum levels of muscle enzymes such as aldolase or creatine kinase, which are released when muscles get damaged.

Additionally, electromyography can be used to detect regions of dead muscle cells that cause abnormal electrical signals conduction.

Another high-yield diagnostic tool is muscle biopsy, and it can show inflammatory infiltrates, mainly composed of CD8+ T-cells, macrophages, and varying stages of necrosis.

Other pathologic findings can include endomysial infiltration by mononuclear cells, endomysium being the thinner portion of the intramuscular connective tissue that surrounds every single muscle fiber; capillary obliteration; overexpression of MHC class I molecules on the muscle cell sarcolemma; and increased amounts of connective tissue.

Treatment of polymyositis typically focuses on suppressing the immune response, usually with corticosteroids.

Dermatomyositis is another autoimmune disease where the immune system attacks its own muscles, but this time it also affects the skin.

The exact trigger for dermatomyositis is unknown.

However, there are a few suspected genetic and environmental factors associated with the disease, like infection with coxsackievirus or specific tumor antigens, such as those in ovarian, lung, or breast tumors.

In dermatomyositis, it is believed that autoantigens in endothelial cells lining the capillaries in muscle and skin cells, trigger a humoral-immune response.

Small antigen-antibody complexes are not very immunogenic, so they don’t get removed from the bloodstream very quickly.

As a result, the complexes persist and they reach the basement membrane of various blood vessel walls, once again activating the complement and causing damage.

Cell-mediated immunity can also be involved, and it’s usually associated with activated CD4+ T-cells, which cause further damage while also infiltrating the surrounding muscle and skin tissue.

Ok, so the bottom line is that inflammation and cellular destruction result in the loss of blood vessels, which causes tissue ischemia and necrosis in the affected muscle and skin tissue.

Symptoms of dermatomyositis are similar to those in polymyositis except there’s also skin manifestations.

When there’s muscle damage, there can be bilateral weakness, muscle atrophy, and muscle pain and tenderness that mostly affects proximal, big muscle groups, like the shoulder or hip. In severe cases, the muscles of the pharynx or esophagus can be affected causing dysphagia and aspiration pneumonia.

Now a high yield concept that you need to know for you exams is that unlike polymyositis, the skin is also involved.

One classic finding is a purplish rash on the upper eyelids, called a “heliotrope rash” which is named after a purple flower.

A similar rash can involve the shoulders, upper chest, and back, resembling a “shawl.”

Another sign is a malar rash in the shape of a butterfly, on both cheekbones and the nasal bridge.

Another classic finding is Gottron's papules, which are red, often scaly, bumps overlying the knuckles of the fingers.

These rashes can be photosensitive, meaning they worsen when exposed to sunlight, and are itchy and painful.

Individuals might also present with irregular, darkened, thickening of the fingers and these make the hands look like they’re covered in grease or oil, so it’s called “Mechanic’s hands.”

One last thing to remember is that although dermatomyositis doesn’t cause cancer, it’s associated with an increased risk of of hidden malignancy, like ovarian, lung, and stomach cancer.

So remember to keep an eye out for people with dermatomyositis who also develop non-specific symptoms like fever, night sweats, and weight loss.

The diagnosis of dermatomyositis is similar to that of polymyositis, but it’s based on the combination of skin and muscle findings.

There can also be increased levels of muscle enzymes, like creatine kinase, and abnormal findings on an electromyograph.

A muscle biopsy might show signs of muscle atrophy and perimysium inflammation with CD4+ T cells.

Treatment typically focuses on suppressing the immune response, usually with corticosteroids, such as prednisone.

Antimalarial medications such as hydroxychloroquine and chloroquine, are sometimes effective in the management of skin rashes, along with sun avoidance and wearing protective clothing.