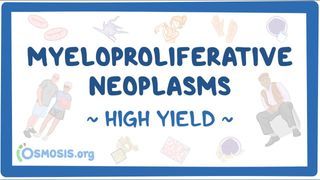 A 70 year old female named Jenny is brought by her husband to the emergency department complaining of blurred vision and headache.

Her face appears plethoric and her husband says that Jenny has been complaining of extreme itchiness after showers for the last few days.

She has no significant past medical history.

Next to Jenny, there’s a 65 year old male named Seth that came in with fatigue and progressive weight loss due to early satiety.

Past medical history is unremarkable.

Both Jenny and Seth suffer from myeloproliferative neoplasms.

These are a group of malignant neoplasms characterized by proliferation of the bone marrow cells from the myeloid lineage.

That includes RBCs, platelets, as well as granulocytes, which include neutrophils, basophils, mast cells, and eosinophils.

Each disorder can potentially cause proliferation of all of the myeloid cells, but they’re classified based on the dominant cell line involved.

So there’s polycythemia vera, for RBCs, essential thrombocythemia for platelets, chronic myeloid leukemia, or CML, for granulocytes, and the odd one out, primary myelofibrosis, which doesn’t really have a dominant cell line, but instead is characterized by bone marrow fibrosis.

This is called the Philadelphia chromosome.

Alright, so let’s take a closer look at these myeloproliferative disorders, starting with polycythemia vera, where there’s an increase in RBC production.

It typically begins with a mutation in a single hematopoietic stem cell, which gives rise to RBCs, WBCs, and platelets.

In 90 percent of the affected individuals there is a mutation of the gene that encodes for a non-receptor tyrosine kinase called Janus Kinase 2 or JAK2, and that’s something you absolutely have to remember for the exams.

Normally, the kidneys produce erythropoietin, which is a hormone that binds to receptors on the hematopoietic stem cells and activates JAK2.

However, when there’s a mutation, it keeps JAK2 activated all the time, and these cells are able to divide even in the absence of erythropoietin.

This results in massive RBC production.

The interstitial cells of the kidney sense the high levels of RBCs, so they decrease erythropoietin production to keep the RBC levels normal.

However, as the mutated cells proliferate, they rapidly become the predominant hematopoietic cells in the bone marrow and this will keep increasing RBC levels.

In time, these cells start to die out and lead to fibrosis of the bone marrow.

At that point, the bone marrow can no longer produce blood cells, leading to anemia or low RBC levels, thrombocytopenia or low platelet levels, and leukopenia or low WBC levels.

This is known as the spent phase.

And once the disease is in the spent phase, it’s really a different disease altogether.

At that point it’s secondary myelofibrosis.

The treatment of polycythemia vera include phlebotomy, hydroxyurea or a JAK inhibitor like Ruxolitinib.

Okay, next up is essential thrombocythemia, where there’s an increase in platelet production.

It can be caused by a genetic mutation in the JAK2 gene like in polycythemia vera.

Normally, the liver and kidneys produce a hormone called thrombopoietin which binds to hematopoietic cell receptors.

When it binds, those cells activate the JAK2 gene which makes them divide and mature into megakaryocytes, which are responsible for creating platelets.

But unlike polycythemia vera, only 50 percent of patients have a JAK2 mutation.

They can have mutations in the thrombopoietin receptor, MPL, or in the chaperone protein, Calreticulin or CalR.

CalR mutations are present in 25 percent of patients.

Okay, whatever the mutation, the signalling pathway remains active all the time, and that means that platelets keep getting produced even in the absence of thrombopoietin.

This is why it's also called chronic idiopathic myelofibrosis.

Okay, although primary myelofibrosis is a myeloproliferative neoplasm, it doesn’t always cause a cell count elevation.

That’s because it results from an abnormal proliferation of megakaryocytes that, instead of making platelets, make cytokines and a very high yield one is platelet derived growth factors, or PDGF.

This cytokine stimulates excessive collagen deposition in the bone marrow, which replaces the hematopoietic stem cells, causing anemia. The WBC and platelet counts are variable, and can be increased, normal or decreased depending on how much of the bone marrow is fibrosed.

For the exams, remember that 50 percent of patients with myelofibrosis have a JAK2 mutation, and 25 percent have a CalR mutation and that’s exactly the same as in essential thrombocythemia!

Alright, now most patients with myeloproliferative disorders don’t have symptoms and are discovered incidentally when a CBC is done for another reason.

But sometimes symptoms can occur and you have to remember them for the exams since they are very high yield!

In polycythemia vera, all those extra RBCs in the blood can make it sludgy and highly viscous.

Hyperviscosity causes stasis in the circulation, which augments the formation of blood clots in different tissues, causing various symptoms.

In the brain, they can cause blurred vision, headache, or strokes.

Or in the heart, they can cause angina or myocardial infarction.

Blood clots can also form in unusual locations, such as the stomach where they can lead to peptic ulceration, or in the hepatic veins, they can result in Budd-Chiari syndrome; characterized by the triad of abdominal pain, ascites and an enlarged liver.

Now, since myeloproliferative neoplasms can cause an increase in all myeloid cells, mast cells can also be increased in polycythemia vera.

Now, the plethoric face and the itching after a hot shower are probably the best clues you can get on the exams for polycythemia vera!

Okay, now a rare but characteristic presentation of polycythemia vera is erythromelalgia; which are episodes of redness and intense warmth and pain in the palms and soles, caused by small blood clots in the distal extremities.

These blood clots can manifest from the hyperviscosity that predisposes patients to thrombosis, but can also be related to an increased platelet count in polycythemia vera patients.