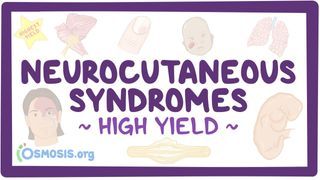 At the family medicine clinic, a 17 year old male named Heath came in because of lower back pain.

Clinical examination reveals lots of small growths on the face, light flat patches throughout his body, and a darker raised patch on his forehead.

Heath was adopted early in his life and his family history is unknown.

Abdominal ultrasound reveals an angiomyolipoma of the left kidney.

Next to Heath, there’s an 8 year old child named Sylvia.

Sylvia complains of difficulty seeing what the teacher is writing in school.

She also has a purple mark that covers the forehead and her right upper eyelid.

Her medical history includes an episode of seizure when she was 5 years old.

A brain MRI is ordered and reveals brain atrophy.

Finally, there’s a 45 year old male named Austin who came in because of a ringing sound in his ears and a gradual loss of hearing.

Okay, so all of them have a neurocutaneous syndrome.

Neurocutaneous syndromes primarily affect the nervous system and the skin.

They include Sturge-Weber syndrome, tuberous sclerosis, neurofibromatosis type I and II, and Von Hippel-Lindau disease.

For the exams remember that Sturge-Weber occurs due to sporadic mutations, while tuberous sclerosis, neurofibromatosis type I and II, and Von Hippel-Lindau disease are autosomal dominant conditions.

Alright, now let’s take a closer look at these different disorders, starting with Sturge-Weber syndrome, which is also known as encephalotrigeminal angiomatosis.

During week 6 of development, as the cephalic portion of the neural tube grows, a network of tiny blood vessels called a vascular plexus develops.

There’s a gene called the GNAQ gene which codes for a guanine nucleotide-binding protein that is involved in the development of that plexus.

Normally, around week 9, the GNAQ gene stops getting expressed, leading to the regression of the vascular plexus.

But in Sturge-Weber syndrome, a sporadic mutation occurs that let some cells keep making GNAQ proteins.

The mutated cell then replicates over and over, so all of the cells that descend from it have the mutation.

This is an example of somatic mosaicism.

This means the individuals have some cells in their body with the mutation and others with the normal gene.

Now as the GNAQ proteins accumulate, it results in the excessive growth of capillaries in tissues that derive from the ectoderm, especially the brain, eyes, and facial skin.

The most common presentation is unilateral and complete disease, meaning it affects both the brain and the face on the same side, and most often the eye is not involved.

These two proteins combine to form hamartin-tuberin complex, which binds to and inhibits another protein called mechanistic target of rapamycin, or mTOR.

Normally, mTOR increases cell proliferation and so the hamartin-tuberin protein complex acts as a tumor suppressor.

So when there’s a mutation in the TSC genes, it causes an altered hamartin-tuberin protein complex that’s unable to switch off mTOR.

As a result, benign tumors and growths made of a variety of cell types, called hamartomas, form throughout the body.

Also, the lifetime risk of cancer is increased.

The brain and the skin are usually affected the most, along with the kidneys, heart, lungs, and eyes.

There are two types, type I and type II, and they’re caused by mutations in the NF1 or NF2 gene, which are found on chromosomes 17 and 22, respectively.

Normally, these are tumor suppressor genes that code for neurofibromin and merlin proteins.

Merlin is a protein found in the cytoskeleton of neurons and its tumor inhibitory mechanism isn’t fully understood.

You’re much more likely to be asked about the mechanism of type I neurofibromtaosis and neurofibromin, which inactivates the RAS pathway.

The RAS pathway takes part in many other signaling pathways responsible for cell growth, so dysregulation leads to the growth of neurofibromas which are benign, fibrous tumors that originate from neurons.

For neurofibromatosis type II, a high yield fact is that it mainly causes schwannomas which arise from schwann cells.

The VHL gene is a tumor suppressor gene that codes for proteins in charge of degrading a transcription factor called hypoxia-inducible-factor, or HIF.

HIF is responsible for up-regulating genes that code for platelet-derived and vascular endothelial growth factors, or PDGF and VEGF, both of which promote new blood vessel formation and cell growth.

In VHL disease, this tumor suppressor gene is mutated or deleted, causing an increase in hypoxia-inducible-growth factor, which increases the levels of PDGF and VEGF and ultimately the risk of tumor formation.

So, VHL disease is characterized by the development of benign and malignant tumors in various organs, such as the eyes, kidneys, adrenal glands, CNS, and pancreas.

But each of the neurocutaneous syndromes have symptoms that are special to them and can help you identify them.

The first high yield symptoms is the characteristic nevus flammeus, which is a non-neoplastic birthmark.

This is also known as a port wine stain, and it’s a purple mark on the face in the areas innervated by the trigeminal nerve.

The trigeminal nerve, especially the ophthalmic and maxillary distributions, are involved because during embryological development, it’s one of the first cranial nerves to develop from neural crest cells.

Typically, the port wine stain covers the forehead and upper eyelid on one side of the face, but in some individuals, it covers the whole face.

Now, in the brain, some individuals develop leptomeningeal angiomas, which are vascular malformations in the meninges that lead to pooling of blood, impaired venous drainage, and brain ischemia.

Ischemia causes brain atrophy which relates to the extent of neurological deficits.

These include developmental delay, seizures, and muscle weakness (or hemiplegia) on the side opposite of the port-wine stain or on both sides if the disease is bilateral.

The brain can also develop areas of calcification on brain gyri.

This type of brain calcification takes on a tram-track pattern because it literally looks like tramway tracks.

Now, some individuals also have congenital trabeculodysgenesis, which is when the part of the eye responsible for draining the aqueous humor is underdeveloped.

That leads to increased intraocular pressure and glaucoma that can cause reduced vision or even blindness in the affected eye.

It is thought that the presence of episcleral hemangioma can also lead to glaucoma.