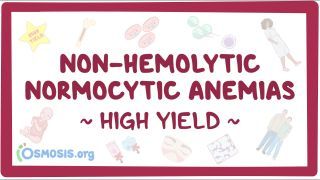 At the family medicine center, Sofia, a 32-year-old black person of African descent, came to visit the doctor because she has been feeling fatigue as well as exertional dyspnea.

Next to Sofia, a father from Ireland brings his 14-year-old son, John, who’s been less active and has bruised easily for the past month.

During the clinical examination, his spleen cannot be palpated.

CBC is ordered for both people and they show low hemoglobin with normal MCV and reticulocyte count index lower than 2%.

John also has leukopenia and thrombocytopenia.

Both John and Sofia are suffering from anemia, which is defined as lower than average levels of hemoglobin, typically below 13.5 grams per deciliterg/dL in adult men and below 12.0 g/dL in adult women.

Now, anemias can be broadly grouped into 3 categories based on mean corpuscular volume, or MCV, which reflects the volume of an RBC.

So for your exams, if you run into a normocytic anemia and the reticulocyte production index, or RPI, is higher than 2%, think hemolytic anemia, since the red blood cells are being destroyed and the body compensates by producing more.

If it’s a non-hemolytic anemia, the reticulocyte production index is lower than 2% since the anemia is caused by a decrease in red blood cell production.

Now, in this video, let’s focus on the nonhemolytic normocytic anemias, which are basically anemia of chronic disease and aplastic anemia.

Keep in mind that although anemia of chronic disease is classified as a normocytic anemia, in less than 25% of the cases it could present as microcytic.

Let’s start by looking at anemia of chronic disease, which is also referred to as anemia of inflammation.

Whenever there’s inflammation there’s an increase in the release of a protein called hepcidin by the liver.

Hepcidin binds to a transmembrane protein called ferroportin which can be found on intestinal mucosal cells, blocking iron absorption from the gut and on macrophages where iron is stored, blocking the release of iron in the blood.

So, in anemia of chronic disease, there is iron in the body but it’s trapped in macrophages and cannot be used by the bone marrow to produce the correct amount of red blood cells, which eventually leads to anemia.

Now, the size of red blood cells initially is normal, and so at first, anemia of chronic disease is normocytic.

But as the disease progresses, due to the inability to properly incorporate iron into hemoglobin, the bone marrow starts pumping out smaller red blood cells, so anemia of chronic disease can eventually become microcytic.

Another hint that could tip you off is that when compared to other kinds of anemia, like iron deficiency anemia, erythropoietin levels are relatively low.

This means that it’s elevated compared to someone who’s non-anemic, but it’s too low to stimulate the necessary amount of red blood cell production. Alright, now anemia of chronic disease can be associated with chronic inflammatory conditions like rheumatoid arthritis and systemic lupus erythematosus; neoplasms like hepatocellular and renal cell carcinoma; and chronic kidney disease.

Okay, moving on to aplastic anemia.

Aplastic anemia is not really only an anemia but it’s actually a type of pancytopenia, which means that RBCs, WBCs and platelets are no longer produced.

Aplastic anemia is caused by failure or destruction of the precursor to platelets and blood cells in the bone marrow.

It’s important to remember the list of causes for aplastic anemia such as exposure to radiation, environmental toxins like benzene, and medications like chloramphenicol, which is an antibiotic; chemotherapy agents like alkylating agents and antimetabolites; carbamazepine, an anticonvulsant; antithyroid agents like methimazole and propylthiouracil; and NSAIDs.

Other causes of aplastic anemia include viral infections like EBV, HIV, hepatitis viruses, and parvovirus B19; and autoimmune disorders, where white blood cells attack the bone marrow.

Fanconi anemia is also another potential cause, where there is a DNA repair defect causing bone marrow failure and pancytopenia.

However, aplastic anemia can also be idiopathic, meaning it’s not quite clear why there’s bone marrow failure but it’s usually caused by an immune mediated mechanism.

For your exams, you should differentiate aplastic anemia from pure red cell aplasia.

This is a rare form of anemia where the bone marrow ceases to produce red blood cells exclusively, while white blood cells and platelets are produced normally.

It may be due to congenital causes, like Diamond- Blackfan anemia, where there is abnormal synthesis of ribosomes.

Acquired causes include autoimmune diseases where white blood cells attack red blood cell precursors, tumors and especially thymoma, where antibodies against erythropoietin are produced, and viral infections like HIV, herpes and parvovirus B19.

Once again, pure red cell aplasia can also be idiopathic, where no cause can be identified.

Now, all anemias can present with fatigue, pallor and shortness of breath, but other symptoms of the underlying cause can help you identify the specific disease.

In anemia of chronic disease, you may have symptoms like joint pain in rheumatoid arthritis.

For aplastic anemia caused by Fanconi anemia, we may see the characteristic clinical features, meaning short stature, increased incidence of tumors and leukemia, cafe-au-lait spots and thumb or radial defects.